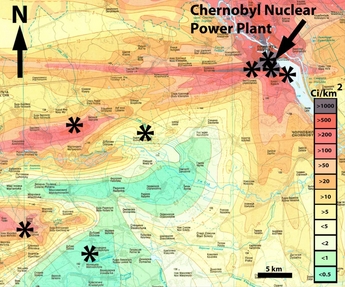 Birds living near the site of the Chernobyl nuclear accident have, on average, five percent smaller brains, according to research led by a University of South Carolina scientist.

Twenty-five years after the Chernobyl disaster, low-dose radiation has proved to have significant effects on normal brain development, shown by the birds' brain size. Smaller brain sizes are believed to be linked to reduced cognitive ability, says Dr. Timothy Mousseau, a USC biology science professor who, along with his collaborator, Anders Moller of the University of Paris-Sud in France, led the team of researchers from the United States, Italy, Norway, France and Ukraine.

"These findings point to broad-scale neurological effects of chronic exposure to low-dose radiation," Mousseau said. "The fact that we see this pattern for a large portion of the bird community suggests a general phenomenon that may have significant long-term repercussions."

Mousseau said these types of defects have been previously reported in humans and other organisms, but those were at higher contamination levels.

Mousseau has been studying the effects of the Chernobyl accident for 12 years, exploring the ecological and evolutionary consequences of the radioactive contaminants affecting populations of birds, insects and people inhabiting the Chernobyl region of Ukraine.

In this study, published this month in the journal PLoS One, Mousseau and his colleagues studied 550 birds belonging to 48 different species living in exclusion zones set up around the site of the accident. The researchers found the small brains were particularly evident in the youngest birds.

PLos One describes itself as an interactive open-access journal for the communication of all peer-reviewed scientific and medical research (www.plosone.org).

"This suggests that many of the birds with smaller brains are not surviving to the next year, perhaps related to decreased cognitive abilities." Mousseau said not only are their brains smaller, but it seems they are not as capable at dealing with their environment as evidenced by their lower rates of survival.

Stressed birds often adapt by changing the size of some of their organs to survive difficult environment conditions. The brain is the last organ to be sacrificed this way, meaning the radiation could be having worse impacts on other organs of the birds.

Mousseau said there is information in the medical literature to suggest that low-dose radiation can be harmful to humans, including recent studies on children in northern Ukraine who have higher rates of neural tube defects and related neurological disorders than other children in uncontaminated regions of the Ukraine and Europe.

Since 1998, the University of South Carolina has sponsored research related to the long-term ecological and health consequences of the radioactive contaminants that were dispersed over vast expanses of Europe in 1986. The research is important for the understanding of long-term consequences of radiation and ecosystems and human health, and it will be instrumental in predicting the environmental half-lives of these contaminants. This research is also of significance for hazard assessment related to industrial, military or terrorist nuclear incidents and the effects of mutagens on evolutionary responses of natural populations.

Last year, Mousseau and Moller published the results of the largest wildlife census of its kind conducted in Chernobyl. The study revealed that insect diversity and mammals were declining in the exclusion zone surrounding the nuclear power plant. The research examined how often a species renewed parts of its DNA, thus finding a way to predict which species were likely to be most severely damaged by radioactive contamination.

Further information can be found at: http://cricket.biol.sc.edu/chernobyl/