Ceremony to mark the first cascade at Georges Besse II 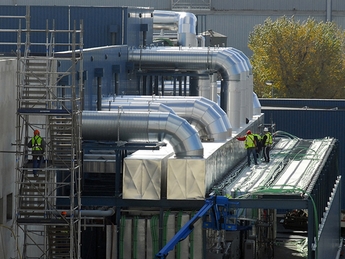 Today, 18 May, French prime minister, François Fillon and Areva CEO Anne Lauvergeon inaugurated the first centrifuge cascade of the Georges Besse II uranium enrichment plant, where production is set to being this year.

GBII is being built at the Tricastin site in France’s Drôme department in the Rhône-Alpes region in southern France. It will comprise two enrichment units and will produce 7.5 million SWUs (separative work units) by the time it reaches full capacity in 2016.

At a cost of some EUR3 billion ($4 billion), the project: “represents one of France's biggest industrial investments of the decade,” according to Areva. It will enhance the company’s position as a major player on the world’s enrichment market, on which it has almost a 25% share. (According to the OECD Nuclear Energy Agency's 2008 report titled 'Market Competition in the Nuclear Industry,' Russian Atomenergoprom had a >30% share of the world enrichment market ; Areva and Usec each had shares of between 20 and 30%; and Urenco had a share of between 10 and 20%.)

Speaking at the end of the inaugration ceremony, Anne Lauvergeon described the GBII enrichment plant as “a symbol of Areva’s determination to strengthen its position as world leader on the nuclear energy market and offer its customers the best solutions,” adding that “the group is continuing to invest, develop and recruit, bringing the entire industrial activity with it.”

Construction works on the Georges Besse II plant began in September 2006. The plant, which will use centrifuge technology, will replace the ageing diffusion plant George Besse I, which has been operating since 1982.

In early February, Areva signed its biggest ever uranium enrichment contract with French utility EDF. The long-term contract worth more than EUR5 billion ($7 billion) secures enrichment services, to be provided by Georges Besse II centrifugation enrichment plant, which according to Areva already has a “burgeoning order book.”