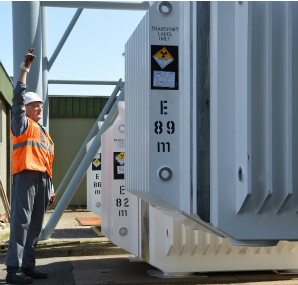 The new 14-year, £6-7 billion contract, formally awarded by the Nuclear Decommissioning Authority (NDA), will take all the sites through to the final stages of their decades-long programme of work (either an interim end state or into care and maintenance). CFP will build on the progress already made by previous parent body organisations EnergySolutions (for all of the Magnox sites) and UKAEA (for Harwell and Winfrith).

Today's share transfer ends the NDA's two-year procurement process to appoint a new parent body organisation for Magnox Ltd and Research Sites Restoration Ltd. The NDA's contract with CFP outlines a clearly defined programme of work and challenging financial targets, in line with the tender submission. The Cavendish Fluor Partnership -- a joint venture between the UK's Cavendish Nuclear, part of Babcock International, and US-based Fluor Corporation -- will own the shares in the two Site Licence Companies (SLCs) for the 14-year contract period. The SLCs will continue to operate the sites on behalf of the NDA.

NDA Chief Executive John Clarke added: "Today is a significant achievement for the NDA.  By introducing a fundamentally different contract, based upon a clear understanding of the scope of work to be delivered across 12 sites over 14 years, we have been able to generate real competitive tension during the competition process." The CFP bid was selected from four tender submissions which were evaluated against a range of criteria including cost, health, safety and security, underpinning technical rationale, commercial terms and approach to socio-economics.

CFP now brings in a team of more than 30 senior executives from their parent organisations Cavendish Nuclear and Fluor Corporation, to commence introduction of the new programme of work over an initial 12 month period. A vital element of the CFP strategy is to have a good team and single organisation running the two SLCs, using a CFP integrated management system.

Kenny Douglas, Cavendish Fluor Partnership Managing Director, said: "We will be seeking to standardise the processes and approach taken and to maximise learning across all locations, integrating the approach and programmes across all the sites, while delivering locally. Every aspect of delivery will be looked at over the period of the contract to ensure taxpayers' money is spent as effectively as possible."