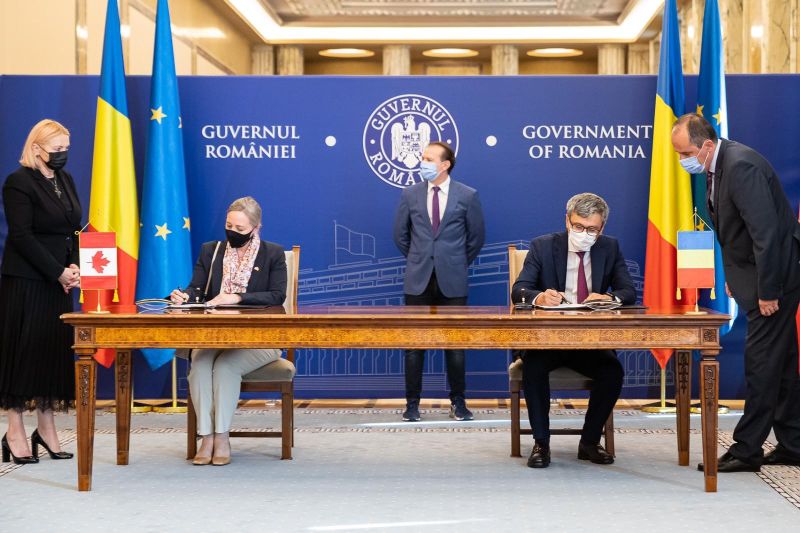 Canada’s Department of Natural Resources on 5 August announced that Romania had signed a memorandum of understanding (MOU) with Canada committing the two countries to strengthening cooperation on nuclear energy, including collaboration on Candu refurbishments and new build projects in Romania.

Canada is one of over 120 countries committed to achieving net-zero emissions by 2050. In order to achieve this ambitious climate target, we must draw on a range of clean energy technologies including nuclear power, NRC said. The MOU was signed by Annick Goulet, Canada’s Ambassador to Romania, on behalf of Minister of Natural Resources Seamus O’Regan Jr, Romania’s Prime Minister Florin Cî?u, and Virgil-Daniel Popescu, Romania’s Minister of Energy.

The MOU, which is not legally binding, underscores the importance of strategic partnerships between Canada and Romania, including common climate change objectives and a mutual interest in decarbonising electricity systems in order to meet net-zero emissions by 2050.

Natural Resources Canada said the collaboration “builds on existing relationships between Canada and the European Union and highlights the long-standing partnership in the nuclear energy sector and upcoming projects in Romania”. The MOU also “demonstrates both countries’ joint leadership on advancing nuclear energy and positions Canada as a partner of choice to support nuclear development in Romania”.

“Nuclear cooperation has been a pillar of the 55-year-long Canada–Romania relationship. I am proud to have renewed our bilateral commitment by signing this MOU today and look forward to further consolidating our exchanges in all spheres, from security to trade,” said Annick Goulet.

Romanian prime minister Florin Cî?u said: “My mandate is characterized by two things: investments and reforms. Today, we are here to present a major investment project. To have sustainable economic growth, you need to invest. There is no alternative. The MOU signed today with Canada makes an important statement: clean energy is our common goal.”

Romania’s Minister of Energy Virgil-Daniel Popescu said the MOU was an important step for the future of nuclear energy in Romania. “We will collaborate with our partner Canada on the development of nuclear reactors of SNN, Romania’s state-owned nuclear energy company, including collaboration on Candu refurbishments and new build projects in Romania.”

The MOU noted that Romania’s Energy Ministry is the majority shareholder of National Company Nuclearelectrica (SNN), the sole nuclear power producer in Romania, and the operator of Cernavoda NPP. It also coordinates the Nuclear and Radioactive Waste Agency, and has under its authority Regia Autonoma Tehnologii pentru Energia Nucleara (State Company Technologies for Nuclear Energy), the main institution which will implement cooperative nuclear energy research.

Cernavoda, Romania's only NPP, has two commercially operational Candu 6 pressurised heavy water reactors supplied by Atomic Energy of Canada Ltd. Construction of the two-unit station began in the early 1980s. The 700Mwe Cernavoda 1 was commissioned in December 1996 and Cernavoda 2 in 2007. Construction of three more units began, but was stopped in 1990. The Cernavoda 3&4 project aims to complete two further Candu 6 reactors. Nuclearelectrica is already working with Candu Energy, part of Canada's SNL-Lavalin Group, on extending the operational life of unit 1 until 2026 when it would undergo a full refurbishment, as well as on completion of units 3 & 4.

The MOU also noted that Romania had ratified an agreement in December 2020 with the USA on Cooperation Towards the Cernavoda Nuclear Power Projects and the Civil Nuclear Power Sector in Romania. Prime minister Cî?u, attended the MOU signing said: "The investments are vital and I am glad that the Canadian partners are joining the American partners in order to develop the nuclear field in our country."

Co-operation on SMRs includes “policy work, market analysis, and feasibility analysis to support future deployment”. On detritiation co-operation “ for peaceful use”, includes “development and application of tritium, tritium related equipment and technology, for tritium produced, processed, including tritium from detritiation”.

On supply chain integration co-operation will involve “exploring opportunities to increase cooperation and integration of the nuclear supply chain including, for example, uranium, exchange of goods and services, engineering, maintenance, manufacturing, and cooperation between nuclear operators, industry, and the civil nuclear sector”. It will also include exploring opportunities that will help strengthen the Romania’s domestic nuclear supply chain to “enhance self-sufficiency and realize greater economic benefits from the life extension and longer term operation of Cernavoda Units 1 and 2 and the construction and operation of Cernavoda Units 3 and 4”.

R&D co-operation will include “short-term mission-oriented research and development and long-term, underlying, and exploratory research and development”, as well as approaches to nuclear knowledge management, development of public communications as key inputs into the development of R&D priorities, and cooperation on joint projects. It will also involve “expansion of cooperation between the Canadian and Romanian nuclear research organisations in developing new technologies, diagnostic tools and maintenance systems in materials, corrosion, and other degradation mechanisms to ensure long term safe operation of Candu units in both countries”.

The MOU specifies that “cooperation may take the following forms, where appropriate and of mutual interest”. This may be between governments; by establishing bilateral and/or multilateral relationships with third countries; establishing “plurilateral government to government discussions involving current countries or future countries that may participate in a joint implementation of Cernavoda projects 3 and 4”.

It may also involve lab-to-lab exchanges, including exchange of proprietary information; deepening the existing relationship between Canada, Romania, and other Candu Owner’s Group (COG) members to facilitate information sharing and the deployment of Candu technology; university co-operation; and exchange of information between nuclear operators “related to the safety and security of manufacturing, operation, maintenance refurbishment, and decommissioning of nuclear reactors, particularly as it relates to the current projects at the Cernavoda nuclear power plant”.