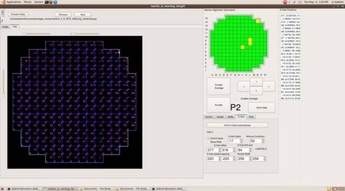 Dave Kelly, Exelon Manager of Outage Services who supervised the deployment of the system, said, “It worked.”

He went on to say, “The system’s ability to overcome the known issues of thermals, the differential between old and new bundles and other core difficulties was outstanding. Since the correct placement of fuel assemblies is a constant concern for the industry, this extremely accurate system is a welcome addition to the current tools for determining FA placement.”

The NM200 system, utilized during the latest outage at the plant the week of 25 April 2010, was able to accurately measure the location of the fuel assemblies and deliver that information to both the bridge operator and the outage/engineering personnel and to permanently store the data for later review.

The NM200 Fuel Assembly Dimensioning and Mapping System is pole deployed down from the bridge above the fuel assembly and utilizes non-contact technology to locate the FA nozzles and their spatial relationship to the baffles. The system then measures, determines and records all of the distances between the fuel assemblies and also the baffles. In addition to measuring, recording and communicating all of the distances, the system also produces a real time green-yellow-red map for immediate usage by outage personnel.

“After struggling with in-vessel dimensions for 13 years, I am very pleased with this development of a non-contact measurement system that worked so well,” stated Keith Moser, Innovation Manager for Exelon Nuclear. “I believe this to be just the first of a series of non-contact measurement systems to solve these persistent in-vessel measurement issues. Exelon as a leader in technology in the nuclear industry is committed to the deployment of appropriate technological solutions to these long standing problems.”

The NM200 Fuel Assembly Mapping System, developed in conjunction with Exelon, will be marketed worldwide by Newton Labs along with its companion products: The NM200UW Underwater laser 3D dimensioning head and the NM200C nuclear camera.

Seattle based Newton Labs is a privately held manufacturer of machine vision, robotics and optical automation. It is a spin-out of the Massachusetts Institute of Technology (MIT).