Bruce 1 generates power for the first time in 15 years 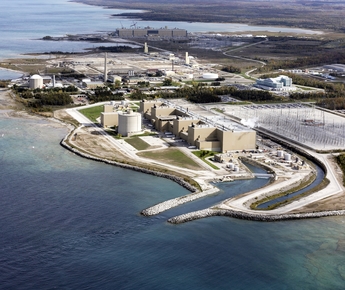 On 19 September, unit 1 of the Bruce nuclear power station in Ontario, Canada, was successfully synchronized to the grid, and began generating power for the first time in fifteen years.

Canada's Bruce A, foreground, and B

Unit 2 is expected to follow before the end of 2012, making the site the largest in the world in terms of number of operable units.

Bruce A unit 2 was laid up in 1995 due to a maintenance accident in which lead contaminated the core. Unit 1 was laid up at the end of 1997. In 2005, Bruce Power launched a restart project, and the units have been undergoing refurbishment since mid-2006. Work has involved replacing their fuel channels and steam generators plus upgrade to ancillary systems, which should enable them to operate for a further 25 years.

“This is a significant achievement for Bruce Power and another tangible milestone that the restart project is nearing completion and we are close to securing eight units of operation,” said Duncan Hawthorne, Bruce Power president and CEO.

The Bruce revitalization programme is an essential element to Ontario’s plan to phase out coal generation in 2014, Bruce Power said.

“This is a big step forward as we work to return the Bruce Power site to its full generating potential, and maintain our role of keeping electricity costs low, the lights on and the air we breathe clean,” Hawthorne said.