Bilfinger to work with Cyclife on dismantling nuclear power plants 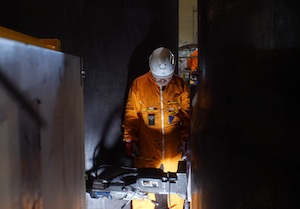 Germany-based industrial service provider Bilfinger said on 8 December that Bilfinger Noell GmbH and EDF subsidiary Cyclife had signed a memorandum of understanding (MOU) to work on the dismantling of nuclear facilities in various European countries.

“In the coming years, numerous nuclear power plants will be dismantled across Europe,” said Christina Johansson, Interim CEO and CFO of Bilfinger. "Together with Cyclife, we can provide complex services from a single source and over the entire dismantling process - from the initial planning and on-site dismantling to the release from the Atomic Energy Act."

Bilfinger and Cyclife   initially intend to work together to dismantle biological shields. These are concrete shells approximately 2.5 metres thick and up to 30 metres high that surround the reactor vessel. For the dismantling of these shields, over 20 projects are being put out to tender in Germany and Sweden alone.

“Bilfinger has been an experienced partner for customers in the energy and nuclear sectors for decades and has already successfully implemented several challenging dismantling projects,” Johansson noted. “Combined with the engineering expertise of Cyclife and its long-standing roots in markets such as Sweden and France, we can together be an important partner for nuclear dismantling throughout Europe."

In future, the cooperation agreement should lay the foundation for long-term cooperation in France, the UK and Switzerland, where numerous NPPs will reach the end of their lifespan in the next few years. Bilfinger and Cyclife also intend to jointly plan and implement the dismantling of primary circuits, ancillary systems and large components, such as steam generators, in the future. The range of services offered by the two companies ranges from feasibility studies, design and approval planning, dismantling, post-operation and implementation planning to the delivery of equipment technology and the actual implementation of the work on site, including staff training and the preparation of the documentation required for discharge from the Atomic Energy Act.

Bilfinger has been involved in the dismantling of nuclear power plants and the treatment of radioactive waste for decades. For example, Bilfinger dismantled the steam generator in the former Mülheim-Kärlich NPP. The company recently received an order from Germany’s Federal Agency for Final Storage (BGE). Bilfinger is developing and testing special machines with which thousands of barrels with low- and medium-level radioactive waste can be safely retrieved from the Asse II salt mine shaft.