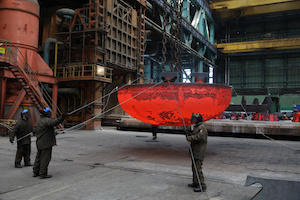 The Volgodonsk branch of AEM-Technologies (part of Rosatom’s mechanical engineering division, Atomenergomash) has completed manufacture of the elliptical bottom of the reactor vessel for unit 3 of the Akkuyu nuclear power plant, under construction in Turkey.

The operation took place in two stages. First, a seamless flat billet weighing 80 tons was made from a cylindrical section of metal. Afterwards, the billet was heated for six hours to a maximum temperature of 1020°C and moved to a 10,000 ton press to be formed into its final shape. The metal is 300mm thick. The part will next be welded to the bottom of the 12 metre long cylindrical reactor pressure vessel, which in total will weigh 330 tons. When finished it will be transported 3000km to Akkuyu on Turkey's Mediterranean coast for installation.

AEM-Technologies General Director Igor Kotov noted: “The implementation of the project to construct Turkey’s first NPP   is under close scrutiny at the highest state level. We understand that this imposes a special responsibility on us, both with regard to the exact observance of the equipment delivery schedules, and in relation to the unconditional compliance of all elements of this equipment with the requirements of the Nuclear Regulatory Agency of the Republic of Turkey. We carry out each stage of production in close and professional interaction with our partners, which allows us to find optimal solutions and increase the overall economic efficiency of the project."

Photo: The elliptical bottom of the reactor vessel for unit 3 of the Akkuyu NPP  (Photo: Atomenergomash)