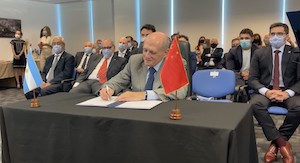 Nucleoeléctrica Argentina SA (NA-SA) and the China National Nuclear Corporation (CNNC) announced that “after a fruitful period of negotiation, on 1 February both companies reached a mutual understanding and signed an Engineering, Supply and Construction (EPC) Contract for the development of the Atucha III Nuclear Power Plant, which will be an HPR1000 nuclear power plant to operate with a nominal gross electrical power of 1200MWe”.

The event was held virtually “with the presence of the highest authorities of both companies and the diplomatic representatives and national and local authorities of both countries,” NA-SA said. “This important event represents the end of a cycle of cooperation and mutual understanding that began in June 2010 and the beginning of a new one, which both companies foresee will be of auspicious prosperity for both nations, allowing closer ties for the peaceful development of nuclear power generation, nuclear science and technology and industrial development.”

The signing of the EPC Contract will be followed by the fulfilment of all the necessary conditions including need to obtain relevant authorisations from the competent authorities of both countries, the joint statement added.

Both companies agreed to highlight that the Atucha III nuclear power plant project is part of the Comprehensive Strategic Association and the Framework Agreement for Economic Cooperation and Investment, both signed in July 2014, and the Agreement between the Government of the Argentine Republic and the Government of the People's Republic of China on Cooperation in the Construction Project of a Pressurised Water Reactor in Argentina, signed in February 2015.

Both parties “considered it relevant to point out” that this development takes place within the framework of the celebration of 50 years of bilateral diplomatic relations between the two countries, as well as in the run up to the visit of Argentinian President Alberto Fernandez to China to witness the opening ceremony of the Winter Olympics. Both companies “highlighted that nuclear power is a clean energy source that has proven to be part of the solution to the difficult and complex environmental challenges facing the world today”.

More details were given on the website of Argentina’s National Atomic Energy Commission (CNEA), which cited CNEA President Adriana Serquis, as saying that the new plant “will...reduce the emission of carbon dioxide” and also “represents the opportunity to carry out the technology transfer of an advanced fuel in the nuclear area”.

CNEA said the nuclear power construction project is part of the Argentina Nucleoelectric Action Plan, approved by the National Executive Power in June 2021, which involves an investment of more than $8 billion. “The signed contract provides for the provision of engineering, construction, acquisition, commissioning and delivery of a HPR-1000 type reactor, which will use enriched uranium as fuel and light water as coolant and moderator,” CNEA noted.

Atucha III will have a gross capacity of 1200MWe and an initial operating life of 60 years, and will allow the expansion of national nuclear capacities thanks to the transfer of technology for the manufacture of fuel elements. According to the planned schedule, the construction works will begin at the end of 2022 and will require the creation of more than 7000 jobs and an involve approximately 40% of national suppliers.

China’s Global Times also reported the event, noting that the contract was signed with the CNNC and several of its subsidiaries. Currently, China’s first Hualong One reactor at Fuqing 5 and the first exported unit at the Karachi nuclear powre plant in Pakistan are operating stably, Global Times said. Fuqing 6, which is located in East China's Fujian Province, was also connected to the power grid recently. In addition serial construction of the Hualong One has begun in South China's Hainan and Fujian provinces.

Meanwhile, Argentine President Alberto Fernandez has said the Argentine authorities are also ready to resume negotiations on the possibility of building a nuclear power plant with the participation of Russia, after Argentina reached an agreement on debt settlement with the International Monetary Fund (IMF). He was speaking to Tass on 1 February before a planned visit to Moscow prior to his trip to China.

"Many infrastructure projects were waiting for this agreement, because they needed external financing, among them hydroelectric power plants and nuclear power plants. Of course, this will be a topic of discussion and negotiations," he said. "Nuclear energy is one of the many topics that appear in the strategic cooperation agreement with Russia. I am always ready to discuss any topic and expand cooperation as much as possible," Fernandez added.

Earlier on 28 January, Fernandez had announced Argentina had reached an agreement with the IMF to settle the debt on the loan, which the fund approved in 2018 at the request of the previous President Mauricio Macri. Fernandez was elected in October 2019, by which time, Argentina had received about $44 billion from the IMF, and the new government refused the remaining amount and insisted on deferring repayment citing the record size of the loan and violations in its issuance.

In December 2021, on the sidelines of the G20 summit, an agreement was signed on a Russian-Argentinean strategic partnership in the field of the peaceful use of atomic energy. Among the main areas of cooperation envisaged by the document is the development of various models for implementation of projects for the construction of large and small nuclear power plants in Argentina.