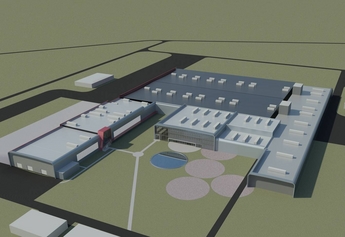 The U.S. Department of Energy has offered a conditional commitment for a $2 billion loan guarantee to Areva for its $3.3 billion enrichment facility planned for Idaho Falls, Idaho.

The plant will use the same industrial process as the Georges Besse II plant: centrifugation. Eagle Rock will be only the second plant to use this technology in the US, after USEC's American Centrifuge Plant. USEC has built and is operating a lead cascade at ACP, but has lobbied for a loan guarantee to finish the plant; it is unclear whether the DOE will grant a second loan guarantee for another enrichment plant. A third plant, Urenco's USA facility (the renamed National Enrichment Facility) is in the final stages of construction in New Mexico.

Currently, the United States obtains half of its enriched uranium from Russia under the megatons-to-megawatts program, in which nuclear materials that were once pointed at the United States are converted to civilian nuclear fuel to power America's economy. The program expires in 2013, after which alternate sources of enrichment services will be required to support the continued and expanded use of nuclear power in the United States.

"Increasing uranium enrichment in the United States is critical to the nation's energy and national security," said Department of Energy Secretary Steven Chu. "Existing reactors will need additional sources of enriched uranium soon. New nuclear plants that could start to come on line as early as 2016 will also need a steady, reliable source of uranium enrichment services. Areva's project will help to meet that demand."

The project must obtain a Combined Construction and Operating License (COL) from the Nuclear Regulatory Commission before the loan guarantee can be finalized. In addition to the $2 billion in loan guarantee authority under the 2009 Omnibus Bill, the Department has made available an additional $2 billion to support uranium enrichment technology from loan authority provided in 2007.

The project must satisfy certain conditions before the loan guarantee can be issued, including the receipt of all appropriate licenses and permits. AREVA submitted a license application to the Nuclear Regulatory Commission in December 2008 to build the Eagle Rock plant at a site 18 miles west of Idaho Falls. If approved, construction on the 3.3 million SWU (separative work unit) facility could begin in 2011 and operations as early as 2014.

Related ArticlesTVEL to supply fuel to Armenian NPP
Post to: