All four UK AGRs back online 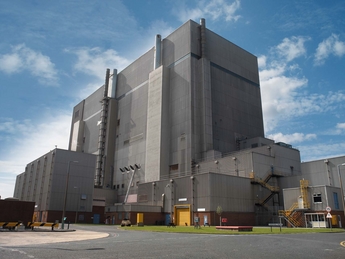 Reactor 2 at Heysham 1 began supplying power to the grid today, following a 17-month outage. It is the last of four reactors at British Energy’s Heysham 1 and Hartlepool nuclear power stations to be returned to service following boiler closure unit (BCU) repairs.

Together the four reactors provide around 2350MWe or some 4% of the electricity generated in the UK.

The reactors were taken out of service in October 2007 after a planned inspection at Hartlepool 1 revealed some corrosion on wires which are part of the BCUs. There are eight BCUs in each reactor and as they cannot be replaced, BE has spent the last 17-months carrying out engineering modifications to reduce the reliance on the wires windings.

The first three units connected to the grid earlier this year – Hartlepool reactor 1 on 26 January, Heysham 1 reactor 1 on 2 February, and Hartlepool reactor 2 on the 21 February – are operating at full load. The fourth reactor, unit 2 at Heysham 1, is being increased to full load in a planned power increase to address any equipment issues that may arise in the process. The rector has been offline for almost one and a half years, so its startup is not routine.

BE said that whilst the reactors were out of service it took the opportunity to bring forward maintenance work originally scheduled for future outages. Such work included the replacement of a generator stator and main generator transformer at Hartlepool and replacement of cast iron cooling water pipe work at both stations.

Vincent de Rivaz, CEO of EDF Energy, which acquired BE in January, said: “This large, complicated modification project has been managed professionally and carried out skilfully and is an illustration of the expertise and commitment of the station staff and all of the British Energy team who supported their work.

EDF has plans to build four Areva EPRs in the UK, however despite this the company is not ruling out lifetime extensions for the existing UK fleet of AGRs. “We will continue to invest in all the nuclear power plants to improve their performance and seek to extend their lives,” de Rivas said.