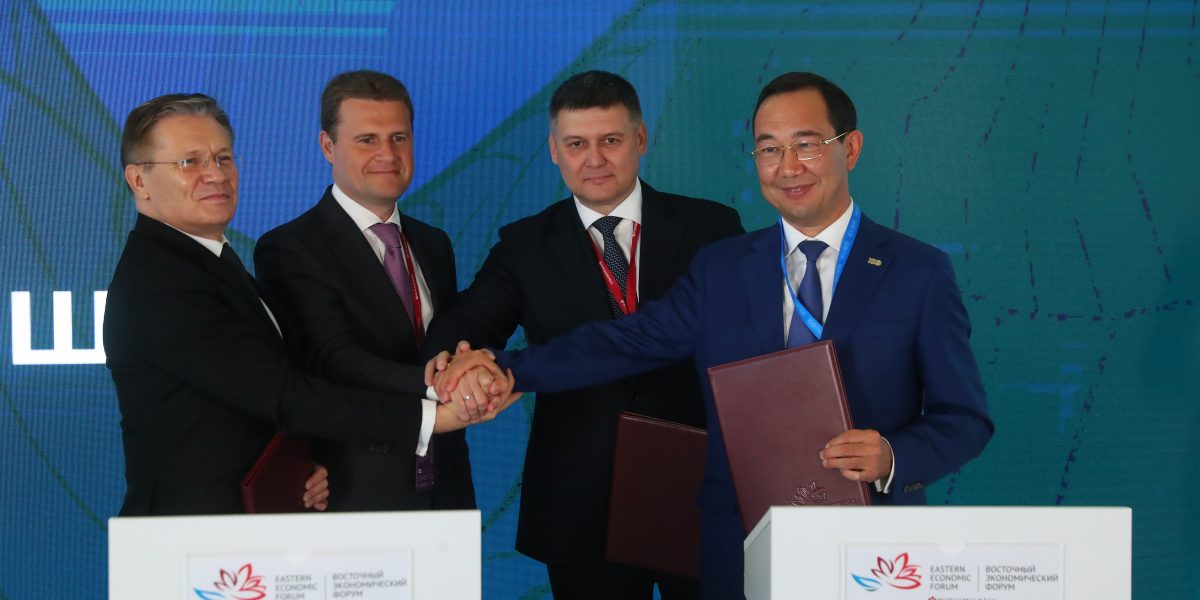 Russia and the Republic of Sakha (Yakutia) have signed an agreement on the sidelines of the Eastern Economic Forum in Vladivostok for the development of a mineral resource centre in the Arctic part of the Sakha Republic (Yakutia). The agreement was signed by Alexei Chekunkov, Russia’s Minister for the Development of the Far East and the Arctic; Dmitry Tetenkin, Deputy Minister of Natural Resources and Ecology; Aisen Nikolaev, Head of the Republic of Sakha (Yakutia); and Alexei Likhachev, Director General of Rosatom in the presence of Russian Deputy Prime Minister and Presidential Representative in the Far Eastern Federal District, Yuri Trutnev.

It detailed development of the centre, including the deposits of Kyuchus, Deputatskoye, Tirekhtyakh, and the construction of transport and engineering infrastructure, and social facilities in the Ust-Yansky ulus (district) and the Verkhoyansky district Yakutia. The need to build a 110 (220) kW power line "Ust-Kuyga - Selenyakh - Tirekhtyakh - Deputatsky" was also confirmed.

The agreement provides for the development of a Comprehensive Plan for the creation of a mineral resource centre in Yakutia using electricity supplied by a low-power nuclear power plant based on two RITM-200N reactors. It outlined possible conditions for the implementation of the project on the principles of public-private partnership.

“The development of minerals in Yakutia is associated with great difficulties in terms of the availability of deposits, logistics, and energy supply,” said Alexei Chekunkov, Minister for the Development of the Far East and the Arctic. “Today's agreement is a new approach. We are forming clusters in which Rosatom creates energy centres, low-capacity nuclear power plants that ensure the launch of a whole range of fields. Such a decision makes it possible to bring into circulation new serious reserves of mineral deposits, and to develop the economy and the social sphere.”

The head of Yakutia, Aisen Nikolaev, said the Republic will “undertake the construction of social facilities in the villages of Ust-Kuyga and Deputatsky, the village of Khaiyr, the renovation of the housing stock, including through the construction of new residential areas, and the demolition of dilapidated and dilapidated housing”, He added: “Together with the Ministry of Digital Development, we plan to implement a project to provide the Arctic regions with high-speed Internet. This, of course, will also affect the territory of the Ust-Yansk mining cluster.”

Deputy Minister of Natural Resources and Ecology of Russia Dmitry Tetenkin said the Ministry is extremely interested in the development of deposits that are part of the mineral resource centre in the Arctic part of Yakutia, both those already provided for use (for example, the large Kyuchus gold deposit, the Tirekhtyakh tin deposit), and those planned (including the Deputatskoye tin deposit) . “The agreement will contribute to the early development of deposits, and will give a new impetus to the search for and involvement in the development of new deposits within this mineral resource centre,” he noted.

“In view of the significant prospects for further economic growth in the Arctic regions of Yakutia and an increase in electricity consumption, the Government of Yakutia approached us with a proposal to consider the possibility of increasing the capacity of the planned Yakut low powered NPP from 55 to 110MWe,” said Rosatom’s Alexei Likhachev. “Rosatom is ready to offer the optimal technological solution. This will provide a reliable and environmentally friendly source of generation for new production facilities, engineering and social infrastructure facilities.”

Image: Alexei Chekunkov, Russia’s Minister for the Development of the Far East and the Arctic; Dmitry Tetenkin, Deputy Minister of Natural Resources and Ecology; Aisen Nikolaev, Head of the Republic of Sakha (Yakutia); and Alexei Likhachev, Director General of Rosatom have signed an agreement to develop a mineral resource center in the Arctic part of the Sakha Republic (courtesy of Rosatom)