The Integral Inherently Safe Light Water Reactor (I2S-LWR) is a concept for a 1000 MWe pressurized water reactor with integral primary circuit configuration. The concept combines the large power (and its favourable economics) with an integral design (and its favourable safety). New technologies ‘squeeze’ a 1 GWe integral reactor into a vessel of manufacturable size. By Bojan Petrovic This concept of the Integral Inherently Safe Light Water Reactor was proposed in response to the US Department of Energy's (DOE's) solicitation for Nuclear Engineering University Programs (NEUP) Integrated Research Projects (IRP) on the topic of inherently safe LWRs. The proposal was awarded to a multi-disciplinary multi-organization team led by Georgia Tech.

The new concept aims to advance performance and safety beyond that of the current Gen-III+ systems, while maintaining large GWe-level unit power, and providing other performance parameters at least comparable to those of current Gen-III+ designs. This presents a substantial challenge. Current LWR designs have been optimised over decades, and the required improvements cannot be based on mere redesign but will require novel technologies. A number of small modular reactor (SMR) designs aim to achieve enhanced safety by using an integral configuration. However, this increases the reactor vessel size and consequently limits the power level to a few hundred MWe. Meeting the requirement for a GWe-level level reactor seemed at first to exclude an SMR approach with an integral configuration.

The I2S-LWR concept is based on combining large power (promoting economics) with integral configuration (promoting safety). It uses a pressurized water reactor, which is grounded on proven and well-understood technology. Each unit generates 1000 MWe, to meet market needs for larger units and to improve economic competitiveness.

The reactor employs an integral primary circuit configuration because of its inherent safety features: for example, it avoids large-break loss-of-coolant accident (LOCA) and control rod ejection. Its core is compact and has a high power density, and it has an innovative compact in-vessel primary heat exchanger (PHX). Its fuel and fuel cladding has enhanced accident tolerance to address concerns arising from Fukushima.

The reactor has enhanced levels of safety-by-design and security-by-design. All safety systems are passive, with as high a degree of passivity as is practical. The concept has enhanced resilience to seismic and other external events. It is equipped with a passive decay heat removal system, capable of removing heat indefinitely (in most scenarios) or, in the remaining cases, providing an extended grace period that does not require any operator action.

An integral primary circuit is more conducive to implementing inherent safety features than a loop configuration. However, it requires a significantly larger reactor pressure vessel (RPV) for the same power level, and the limit on practical (manufacturable, transportable) vessel size then limits the power level to a few hundred MWe. Hence there are a number of proposed integral PWR SMR designs, but few, if any, large integral PWRs. However, large nuclear power plants have demonstrated economic competitiveness, and some markets prefer larger units. I2S-LWR aims to establish the basis for this alternative.

Novel technologies are required to enable this goal, specifically a high power density core (15-40% higher than current LWRs), and high volumetric heat transfer rate heat exchangers. Current LWR oxide fuel designs with Zr-based cladding perform well. However, there is a limited margin in thermal performance for power uprating, its heavy metal (HM) loading may not provide an acceptable refuelling interval for the uprated power, and Zr-based cladding may generate hydrogen in an accident. We propose novel fuel and cladding, consisting of U3Si2 silicide fuel and advanced FeCrAl steel cladding. These materials have recently received wider attention and testing is underway or planned. This system offers higher conductivity (and potentially increased thermal margin) and increased HM loading. But we also examined using traditional oxide fuel so the I2S-LWR could be deployed quickly while the silicide fuel is being test-irradiated and its performance validated.

Primary heat exchangers transferring heat from the primary to the secondary coolant must also be compact as they will be within the RPV. Several alternatives were considered. To transfer close to 3000 MWt within the pressure vessel we envision using modular micro-channel heat exchangers, which have a high volumetric heat transfer rate. Eight units (Figure 1) are paired into four subsystems each axially composed of 10 modules. This makes maintenance and replacement easier.

These heat exchangers are successfully used in other industries, but not as the primary steam generator for nuclear power plants. Using them in steam generators with two-phase flow presents significant challenges. Instead, I2S-LWR uses multiple modules as single-phase primary heat exchangers, which are then combined into a steam generation system using four steam drums (Figure 2). The power conversion system is optimized for performance to match the characteristics of the steam generated, but is otherwise similar to that of current PWRs.

Use of a single-phase heat exchanger with a flashing drum has several benefits.

Main parameters of the I2S-LWR

The I2S-LWR target power is 1000 MWe, with target efficiency of 35%. The proposed core configuration is similar to a Westinghouse two-loop PWR, with 121 fuel assemblies. However, primary coolant and all primary circuit components -- except the eight primary pumps -- are in the RPV (Figure 3). The vessel also contains eight primary heat exchangers, four decay heat exchangers (DHX), the control rod drive mechanisms (CRDM) and the pressurizer, which is in the upper vessel head. The primary temperature and pressure operating parameters are essentially identical to those of current PWRs. Coolant flows up through the core and riser, turns around in the plenum/pumps area, flows downwards through the PHXs, and after exiting continues through the downcomer to the lower vessel head where it begins the cycle again.

After preliminary scoping and trade-off studies, a fairly detailed preliminary layout has been developed and a 3D reactor vessel model printed (Figure 4).

The primary heat exchangers are part of the steam generation system. Under power operation, the primary and secondary heat exchangers together comprise a fully passive, redundant and diverse decay heat removal system with full capability in accident conditions. They are located in the annulus between the core barrel and pressure vessel. A schematic illustrating a possible placement is shown in Figure 5.

As a baseline, the thermal performance of a standard PWR 17x17 oxide fuel was analysed. For the higher power density I2S-LWR core, a 19x19 fuel assembly was developed, with silicide (U3Si2) fuel and advanced steel cladding of FeCrAl type. The number of fuel rods has been increased from 264 to 336, which together with a slightly reduced fuel rod diameter provides an increased heat transfer surface, while maintaining structural performance. A preliminary thermal-hydraulic feasibility evaluation confirmed adequate thermal performance. The active core is 12 feet high, and main fuel assembly characteristics are given in Table 2.

A preliminary study was performed to evaluate the neutronic feasibility of the core, in particular to assess, considering the high power density, whether an acceptable cycle length can be achieved using standard 5% enriched uranium, or whether a higher enrichment would be necessary.

Full 3D core depletion simulations were performed with the Westinghouse core physics package NEXUS/ANC9. A range of viable equilibrium cycles and corresponding reloading strategies was developed and examined. Together with economic analysis the results indicate that a three-batch 12-month cycle is the economic optimum for uranium enrichment limited to the current commercial 5%. With enrichment to 6.5%, 18-month and 24-month cycles become competitive. Two-batch and three-batch reloading schemes for the equilibrium cycle are shown in Figure 6.

The overarching goal of the I2S-LWR safety is long-term self-sustained decay heat removal capability with no need for operator intervention in case of an accident, including the loss of external power. This is achieved through multiple lines of defence and novel dedicated safety systems. The first line of defence -- inherent safety features -- is the most effective since it eliminates or limits event initiators and precursors such as large and intermediate-break LOCAs and control rod ejection. Seismic isolators limit the impact of seismic events. Partial burying of the containment and placing the spent fuel pool underground eliminates or limits the impact of external malevolent threats.

The second line of defence is prevention. All safety systems have a high degree of passivity. They deterministically prevent core damage for design basis accidents.

The third line of defence is mitigation. For example, a configuration with small penetrations limits loss from the pressure vessel coolant inventory. Fuel with an enhanced accident tolerance extends the grace period, which is further extended (potentially indefinitely) by passive secondary heat exchangers. The dynamic probabilistic risk assessment-guided design of passive and active systems improve response to beyond design basis events.

As well as the passive decay heat removal systems, high head injection tanks (HHIT) inside the pressure vessel filled with highly borated water, are an alternative means of passive emergency core shutdown and water make up.

The fourth line of defence is protection. The decay heat removal system consists of a helicoidal heat exchanger with primary coolant, an intermediate loop and a dry tower with air cooling. Consequently, ambient air presents an (unlimited) ultimate heat sink. It is designed to operate in accident situations with natural circulation and therefore it does not require power. It is shown schematically in Figure 7.

As far as practical, the project will use PRA/DPRA and apply the PRA-guided design approach to iterate between the PRA results and design options in the early design phase.

The I2S-LWR will use advanced instrumentation to enhance operational reliability, prognostics and diagnostics, as well as monitoring (including the spent fuel pool) in normal and off-normal conditions.

I2S-LWR aims to implement the safety, security and safeguards features to the whole plant including the Used Nuclear Fuel (UNF) storage system. The system is designed as a flexible, multi-stage wet-then-dry system. The wet storage (pool) has a passive heat removal capability which does not require power to operate. The second stage consists of dry storage sized for a nominal throughput, with external reprocessing or a repository. The third stage consists of a flexible expandable dry store, initially not constructed, but expandable to accommodate all of the plant's fuel over its lifetime without reprocessing or a repository.

The I2S-LWR project has made significant strides since its inception in February 2013. Baseline core and vessel configurations have been established and system performance and safety indicators estimated. However, much more remains to be done. Preliminary safety evaluations are being extended to detailed safety analyses; additional plant systems are being considered; a limited testing programme for critical components (fuel/cladding, micro-channel heat exchangers and power conversion system) is under way; an economic evaluation will be performed. A realistic and fairly detailed 3D model helps in considering fabricability, constructability, maintainability and repairs.

Based on the studies performed so far, the proposed concept seems feasible and attractive. Use of 5% enriched fuel, while not necessarily optimal for the high power density core, seems economically viable in providing a 12-month refuelling cycle, and does not require any new enrichment-related infrastructure. More detailed studies are in progress to develop, size and analyse main operational and safety systems and evaluate their performance, and to test critical novel components. 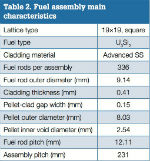 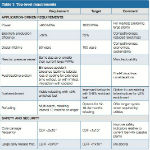