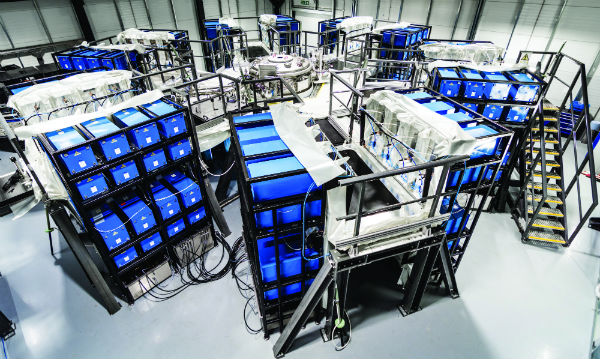 First Light Fusion has "Really started to look beyond the science of solving fusion and solving gain,” says chief operating officer Gianluca Pisanello. The company believes that inertial confinement fusion is the approach that will jump-start this form of electricity generation and have reactors in operation decades before the ITER project or other plasma-based fusion developments are ready for commercial development. ITER, an international collaboration, and Tokamak Energy, a more recent startup, are both based on a ‘torus’. These international projects are trying to produce a cloud of plasma that exists at the temperature of the sun and then wrangle it into the necessary configuration, using electric and magnetic fields, to force the fusion to occur. The difference between the two is the shape of the torus (closer to spherical, for Tokamak Energy) and the use of superconduction to improve the process. But for both a large continuous process, in a machine several metres across, is the heart of the reactor.

At the heart of First Light’s reactor, in contrast, is a pellet just 10-20mm in diameter. The process is based on ‘inertial confinement fusion’. In it, the gas fuel is held in a cavity inside the solid ‘target’. The gas nuclei inside fuse when the target is hit with an intense shock wave. The pellet is destroyed in the process, but the fusion has caused a burst of neutrons that carry an immense amount of heat. Every five seconds another pellet drops into place and the process is repeated — a repeated approach more akin to the internal combustion engine than the hot steady state of a fission reaction.

The energy figures in fusion, like fission, are huge. The energy produced from fusion in just three tiny pellets emits enough energy for a typical house for a year. In practice, the energy needs of the fusion process, and inefficiency in converting heat to power, takes up two thirds of that available energy. But that would still mean the power needed for a domestic property for a year is achieved in comfortably under a minute.

One big target for First Light this year is to demonstrate that it will achieve its pulsed fusion and chief executive and founder Nick Hawker says, “Simulations say we will do it later this year.”

The other is to show that it can manufacture the necessary pellets. Previously it was expected that inertial confinement fusion would need extreme precision in pellet manufacture and equally extreme precision in hitting the target with the shock wave to achieve fusion. “What makes the whole thing work is incredible physics in the target. The target is the key to the whole thing, it’s the hard bit and it’s where we have new technology,” says Hawker. But he says the company has developed a much better target that does not require ultraprecision. “We believe we have it and we can make it,” he says.

This year should show whether those two key barriers can be crossed. But First Light has looked beyond that question to consider exactly how the fusion reaction translates into a workable — and financeable — power reactor. Hawker says, “You always have to keep in mind that you have to build the thing”.

Hawker says that the pellet-based fusion method gives the reactor designer space to play with, and it solves some design problems. He notes that “80% of the energy in the fusion reaction comes in the form of highly energetic neutrons and it is these neutrons that have to be collected and turned into heat.” Trapping the high-energy neutrons produced during fusion in a liquid metal and converting their energy to heat is the first step in using the fusion reaction. But as well as an opportunity, those neutrons present a problem for fusion developers: they cause embrittlement in the metal torus, which shortens its lifetime. First Light says because it has space it can solve that problem. Hawker explains, “Instead of the liquid metal flowing outside the containment wall of the vessel we make it flow inside — imagine a cylindrical curtain of liquid metal around the reactor. This will fall into a pool of liquid metal and be pumped back up to the top again and re-injected.”

Hawker stresses that liquid pool reactors exist and have been used, such as France’s Superphe´nix fast breeder reactor. That plant used sodium coolant, but in First Light’s case the liquid metal — around a metre distance from the fusion site — would be lithium. That is because bombarding the lithium with neutrons will produce tritium — one of the ingredients for the fusion process, but one that is hard to source and relatively short-lived because of radioactive decay. “You have to be self-sufficient in tritium,” says Hawker, adding: “One of the first things we did was to make sure we could produce enough tritium. It can and it was relatively straightforward. People talk about having some lead in there but it has some very nasty [fission] products.”

What is more, “With pure lithium the natural isotope balance [works fine], so we can use the existing lithium supply chain and not enrich the lithium. That’s a big deal.” It is not so important for the first plant, he says, but if you want a lot of plants having to add lithium ‘enrichment’ would make the supply chain much more expensive and challenging.

From process to power plant

While First Light is qualifying the fusion process and pellet manufacturing, the company hopes that the next five years will show investors that the remainder of the plant is familiar enough to make it investable.

Hawker says, “We are trying to keep the reactor as boring as possible”. Pisanello puts it another way: there should be just one part of the project — the fusion process itself — that is not a very familiar and proven technology. Because, “If you only focus on the science of doing fusion you will inevitably come up against engineering problems when you come to do the engineering. How do you scale up to a reactor? Every time we do anything, we have to do it with options that are in our current technology,” Pisanello says.

There is a three-stage process to produce power. From the lithium ‘waterfall’ a heat exchanger makes the link with a secondary circuit. This contains a molten salt — technology similar to that used in concentrated solar power.

Having this ‘secondary’ loop makes heat transfer slightly less efficient, but it has three purposes, Hawker explains. First, it allows for flexibility. As with CSP, the molten salt acts as a thermal store, so the plant as a whole can deplete the heat to run at higher power when the grid has a shortage (and power prices are high) and tap-off less heat for generation when the power demand (and price) is low, replenishing the heat store. “That’s important to the economics of the power plant,” says Hawker, and in later versions a plant may serve heat customers as well.

Second, the molten salts are used to trap and remove stray tritium. “If you get tritium into that water it could contaminate the turbine, and it is very difficult to extract,” Hawker says. The water would also have to be treated as radiological waste. “What we need to find out is which of the molten salts has the lowest solubility of hydrogen [tritrum]. We haven’t worked out which it is yet,” says Hawker.

In a fusion power plant of this type, the reaction vessel will be around 5-7m diameter — not too dissimilar to an existing fission reactor and containing the lithium curtain as well as the target. Around the vessel would be ‘pretty large’ pumps for the curtain, heat exchangers and an impurity removal system for the lithium circuit. One cleanup process will have to remove the remains of the destroyed pellets, each of which will drop into the lithium sump after the fusion process. “These will be in different rooms and we are trying to figure out how to put them together so there can be appropriate handling,” said Hawker. Some areas, such as the lithium circuit, will require radiological protection The building does not have to contain a meltdown (unlike a nuclear fission reactor) but it would have to be ready for other hazards, like a lithium fire, and be able to contain the tritium in the event of disruption.

Overall, according to Hawker, a 300MW fusion power plant will sit on a footprint fairly similar to that of a similarly sized coal equivalent.

The plant would have a life of 30-40 years and its efficiency is not dissimilar to coal: a plant creating fusion in a pellet every 5 seconds would release 1000MW of thermal energy. After all the plant’s fusion, heat transfer and steam- to-power energy ‘dues’ it would be exporting 300-350MW of electrical power.

That is the size of installation that is very familiar to planning authorities, construction firms, power grid managers and power traders — and is especially attractive to the latter if they can trade flexibility.

First Light will not release a price for power from the first reactor, but Hawker says he is aiming for $60-70/MWh in later production. He does not expect to undercut low-cost wind and solar, but wants to compete against gas-fired plant and expects at least to be cheaper than fossil with carbon capture and storage.

He says there are plenty of ‘interesting’ options that could step up efficiency (and reduce prices), but that goes against his ‘boring’ philosophy. “The reason for a lot of the choices in the reactor design is to make the ‘first of a kind’ with minimal engineering risk and financial challenge,” he says. “We want to minimise the upfront cost. We are trying to design the FOAK so we can test all the engineering components within the next five years.”