New radiation detectors have been installed outside and inside site buildings. By B.Breznik, D. Vehovar, V. Planinc

Post-Fukushima upgrades at Krško in Slovenia are being implemented in accordance with the requirements of the national regulator and the plant owners. The first phase, including a passive containment vent filtering system and hydrogen recombiners, a new emergency diesel generator, and a protected store of mobile emergency equipment, is already completed. The next phase in 2014-2018 will cover the emergency control room, a new technical support centre, reconstruction of an operation support centre, alternate cooling features for removing decay heat and on-site flood protection.

The normal and post-accident (post-TMI) plant radiation and effluent monitoring system is relatively new. It was supplied by Merlin Gerin Provence (Mirion) and Sentry during an earlier upgrade, mainly based on the requirements of NRC RG 1.97. These monitors require an external power supply.

There are 11 normal area monitors (Mirion) in the nuclear island, three of them related to waste processing and storage. These monitors have local alarms as well as a main control room display and alarm modules. Their locations were defined by the Westinghouse plant design. After TMI, the monitoring system's post-accident and normal-range channels were upgraded according to US regulations. The plant has therefore duplicated normal range monitoring channels for noble gases from the plant vent header and condenser ejector; it is practical in normal operation to have redundancy in these cases.

An assessment of how to improve Krško's on-site monitoring network for specific post-accident conditions resulted, in 2011, in design and purchase of a new autonomous system of self-powered radiation monitors (ARMS). The system was designed for day-to-day use and extreme accident situations based on prolonged station black-out scenario. It has been supplied by Saphymo and has been in operation since the beginning of 2013.

The ARMS system, with dose rate monitors installed in the yard on the plant perimeter and in the radiation-controlled area (RCA), uses battery powered detectors connected through external powered receivers by shortwave radio link to the computer. In the RCA, they are installed at eight locations inside the auxiliary building, which may be visited by the operators during post-accident conditions.

"The system was...supplied by Saphymo and has been in operation since the beginning of 2013"

The dose rate detectors are resistant to harsh environmental and seismic conditions and cover the range from 10-9 Sv/h to 101 Sv/h. The battery capacity is five to ten years during normal conditions. The local audio and visible alarm is set to 1 mSv/h. The signal receivers are installed in the RCA and have a reliable power source from inverters/UPS units, which could also supply power to other important plant systems. A dedicated client computer is installed in the RP tech room and a similar computer will be installed in the new emergency control room and support centre.

The monitors have a wireless short-range network to send data (power of 10mW and frequency of 434.7 MHz) to the radiation protection office and the plant process information system used by plant operators. In the yard there are now also three standard early warning aerosol monitoring stations connected to this network. In case of emergency, the signal from the perimeter and airborne monitors can be easily monitored by one receiver installed in the emergency mobile monitoring van, up to a few kilometres from the station.

Since previous plant area radiation monitors have an upper range of 1 Sv/h, there are some locations where the higher range of the new detectors gives more confidence over emergency containment source term. Two monitors could provide an early warning in situations such as radioactivity material release within the primary system during refuelling outages.

Radiation protection staff can also use a set of additional handheld gamma radiation probes which communicate wirelessly inside the RCA or outside the buildings. During the next outage there will be a local network available for these small detectors (measuring from 0.5-10 µSv/h to 10-100 mSv/h) inside the reactor containment. Signal strength to the receiver was tested during last year's outage and it covers most of the frequent work locations inside the containment. The benefits of networked handheld detectors at selected points are their lower price and simple installation procedure, which allows them to be adapted to the current work or radiation situation. 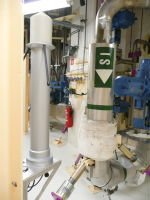 New detector by safety injection piping in the auxiliary building

Locations of new monitors are indicated by a black dot
Post to: