In 2009, the US Nuclear Energy Institute (NEI) recognised that a number of self-revealing leaks had had an impact on public confidence, regulatory margin and, in some cases, plant. Its Nuclear Strategic Issues Advisory Committee approved a "buried pipe integrity initiative" that year. The industry's goal was to proactively address buried piping integrity and where possible, prevent leakage before it occurs. The initiative also aimed to improve on available techniques for inspection and analysing piping.

Previously, most direct inspection technologies focused on the outside diameter of pipes and required excavation to gain access. Excavations at nuclear sites are typically performed with a hydro vacuum truck to lower the risk of damage to buried assets. Depending on the depth and size of the excavation, shoring may be required and, if the exposed buried components are safety-related, missile protection may be necessary. Buried piping often runs under buildings.

Operators needed an approach that did not rely on excavation. After interviewing several utility operators, GE Hitachi Nuclear Energy developed functional specifications for a new inspection tool. Among the specifications: the tool must be capable of inspecting lines up to 1000ft in length, whether they are filled, partially filled, or drained. The tool must require only a single point of access for launch and retrieval. It must be capable of vertical travel, have the ability to negotiate 1.5 diameter bends and be equipped with cameras for visual inspections.

GEH collaborated with GE Industrial Solutions, which services pipelines in the oil and gas sector, to develop an in-line pipe inspection tool. The result was Surveyor™, a self-propelled robot that crawls the length of the pipe, gathering wall thickness data from the pipe internal diameter. The robots have either ultrasonic or electromagnetic inspection packages.

GEH's Surveyor™ recently inspected a section of underground pipe at the South Texas Project (STP), which houses two Westinghouse-built PWRs. This inspection marks the first deployment of the robot at a nuclear power plant.

At STP, GEH provided manpower and equipment to perform a non-safety-related in-line ultrasonic inspection of a non-contaminated 6.3ft aluminium bronze backwash pipe with a nominal wall thickness of 0.280in. The pipe segment that was ultrasonically inspected was approximately 20ft in length.

The robot was deployed in the backwash piping and acquired data for UT corrosion mapping and video inspection.

The inspection crew set up the acquisition station near the pipe access area. The robot accessed the line through the opening from a removed valve and an adjacent tee. The tool traversed through one 90-degree elbow and proceeded vertically down the pipe for approximately 9ft. At that point, the robot encountered a second 90-degree elbow (both elbows have a nominal radius of 1.5D). The ultrasonic inspection began right after the second elbow and continued for about 19ft.

The examination results yielded good ultrasonic data and thickness measurements. Some surface areas were affected by data dropout where no thickness measurements were possible. This appears to be due to excessively rough surface conditions impairing ultrasonic signals. There were also some small areas where the wall thickness appeared to approach the minimum, but these areas are believed to be the result of artifact signals of the transition to the regions where data dropout occurred. The examination was performed twice and the data were consistent. The inspection showed no indications where the wall thickness was less than 0.1in in the areas where good data were obtained. This is the minimum pipe wall thickness set by STP for reportable indications.

At the end of the inspection, the robot reversed direction and proceeded back to the point of the original pipe access for removal. Water was used as the ultrasonic couplant and was supplied through the cable during inspection. A forward facing camera was used to assist the inspection team in determining possible obstructions in the pipe line.

As a result of the deployment at South Texas Project, GEH is reviewing incremental changes to Surveyor's sensing package to increase its effectiveness when inspecting excessively rough inside diameter surfaces.

STP has a large amount of aluminium bronze alloy piping and believes that GEH's technology can be used to meet inspection needs. 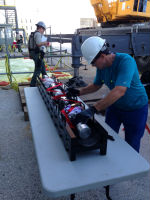