Station blackout accidents have demonstrated that well established, active cooling systems, even those with diversified and redundant components, can fail. Passive heat-removal systems for cooling wet-storage spent fuel pools have been initiated. The first systems employed a single-phase liquid in a closed system under natural-circulation conditions. The need for increased cooling capacity has led to development of a system that employs two-phase natural circulation. By T. Fuchs, R. Trewin, M. Reck and L. Ornot

Passive wet spent-fuel storage facilities incorporating single-phase natural circulation have been successfully installed and operated. They are designed to meet performance requirements for various operating conditions, for example normal operation, abnormal operation, and accident conditions (for example earthquake and airplane crash). Figure 1 shows that the heat from the spent-fuel pool is transferred to the ambient air by means of two heat exchangers (HX).

The design of the passive heat-removal system depends on the temperatures of the boundary conditions for the coolant cycle. Examples of the maximum allowable spent-fuel-pool temperatures and corresponding ambient air temperatures for the various operating conditions are listed in Table 1.

A first-of-a-kind wet spent-fuel storage facility designed by AREVA GmbH has been in operation since 2008, and demonstrates the feasibility of an economical large-scale passive heat-removal system. Due to the gradual loading of this facility, the installation of the heat-removal system was divided into two stages. The first stage has been operating for five years without any problems. The second stage will be installed in 2015.
The wet spent-fuel storage facility has evolved since its design started in 1999. A test mockup in AREVA laboratory conditions at the Technical University of Dresden, Germany, had a footprint of 2m sq. and a height of 9m, and the plate heat exchanger has dimensions of 0.8x1x0.5m. The first stage (a single-phase system) was designed to remove 500 kW of heat from the spent- fuel pool at the Goesgen nuclear plant. Improvements to the physical design of the heat exchangers resulted in a second stage of the wet-storage heat-removal system (also single-phase), with the capacity to remove 750kW of heat from the spent-fuel pool, bringing the total capacity of the system to 1.25MW. The detailed design of this system was due to be completed in 2014; commissioning is planned for the beginning of 2016.

The cooling capacity is the amount of decay heat that can be removed from the fuel assemblies when the ambient air temperature is at the design conditions. These parameters also depend on the design of the facility. An interim-storage pool like the one at Goesgen has a lower design heat load than other spent-fuel pools, because the fuel elements have already cooled for approximately seven years in a separate fuel pool inside the containment. After this period they are moved to the wet spent-fuel store where they stay until they are loaded to dry-cask storage. The design heat load for a containment fuel pool is much higher, due to an additional heat load from fuel unloaded from the core during outages.

Additional increases in the capacity to remove heat from a spent-fuel pool requires a fundamental change in the mode of operation of the wet-storage heat-removal system. The heat flux in the water-water HX and water-air HX must be increased in order to increase the heat-transfer rate in the same volume available for the heat exchangers. This must be achieved without unduly decreasing the coolant's mass flow rate, which depends solely on natural circulation.

One method of achieving these goals is to use two-phase flow and heat transfer in the coolant.In a two-phase heat-removal system, the coolant undergoes boiling in the heat exchanger (the evaporator) that removes heat from the spent-fuel pool. In addition, the coolant undergoes condensation in the heat exchanger that transfers heat from the coolant to the ambient air (the condenser). Because the heat-transfer coefficients for boiling and condensation are several orders of magnitude greater than those for single- phase natural circulation, the efficiency of the heat exchangers increases correspondingly. In addition, the density difference between the coolant flowing upward in the risers (vapour) and that flowing downward in the downcomer (liquid) is large enough to offset any increase in the resistance to flow caused by the two-phase pressure drop.

Assuming that the pressure drop in the condenser is negligible, the temperature difference between the inlet and outlet of the ondenser is zero (see Figure 2; in reality, some superheating of vapour at the inlet, or subcooling of liquid at the outlet, or both can be expected). If one assumes that the coolant is at saturation temperature at the inlet and outlet of the condenser, the temperature of the downcomer is the same as that of the riser.

The performance of two-phase heat exchangers under natural-circulation conditions is the topic of current research- and-development activities. In particular, the performance of the condenser and evaporator have been investigated.

Figure 4 shows the capacity of a two- phase heat-removal system currently under investigation at AREVA GmbH in Erlangen, Germany, with an evaporator and condenser section of about 0.3x0.3x0.3m. Both single- phase and two-phase investigations were performed. Heat was transferred from water to the coolant in the evaporator; however, heat was transferred from the coolant to water, instead of air in the condenser.
The results of single-phase natural circulation obtained with a coolant labelled 'fluid a' are shown as a grey line in Figure 4, where the capacity (on the left ordinate) is plotted as a function of the available temperature difference. The capacity varied from less than 20W to more than 280W, as the available temperature difference increased from 12K to 58K. The uncertainty in the calibrated temperature measurements was less than 0.1K. A propagation-of-uncertainty analysis showed that the uncertainty in the heat removal ranged from 5% to 7% of the heat transfer from the water to the coolant in the evaporator.

In the experiment, water was chosen rather than air as the heat sink to provide a highly controlled boundary condition with little experimental uncertainty in the data. However, this experimental alteration may affect the real-world performance of the system. If the heat were transferred to ambient air, the heat transfer coefficient on the air side would be different than in the experiment, depending on the design of the air-side surface of the heat exchanger and the wind conditions. The temperature of the ambient air would also deviate above and below the temperature of the heat sink in the experiment. The effects of both differences are not known until they are simulated.

Since the start of operation in 2008, the performance of the heat-transfer unit has undergone geometric and thermal-dynamic optimisation, resulting in an improved heat-transfer capability. This will be scaled up in the design of a second stage of the wet-storage heat-removal system with an increased heat-removal capacity. 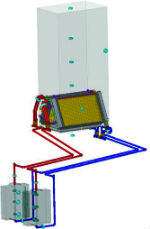 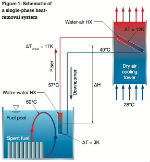 Figure 4: Heat removal as a function of available temperature difference