How Rosatom is fuelling innovation

The nuclear fuel market is at the cutting edge of new technology. Rosatom tells how its multi-million dollar research programme is improving fuel economics, reliability and performance. Competition in the global nuclear fuel industry is getting tighter with major producers trying to extend beyond their traditional markets. In this environment, continuous advancement of fuel products and the introduction of the new models is the main priority if the key players want to stay in the game.

The same is true for TVEL Fuel Company, which manages the fuel division of state nuclear corporation Rosatom, with its core business focused on development and fabrication of fuel assemblies for different types of reactors. TVEL produced more than 7000 fuel assemblies in 2016.

Russian engineers continue to improve the technical and economic features of Russian-made nuclear fuel, ensuring that it is more lucrative for clients, including the operators of both Russian design and other pressurised water reactors.

In 2016, TVEL invested over $16 million in R&D. The primary research efforts were aimed at development and improvement of nuclear fuel and reactor cores, in particular for VVER-1000/1200 models. Russian engineers focus on extending the life of nuclear fuel, enhancing its reliability while ensuring the highest safety standards. They also examine the production capacity of fuel assemblies under uprated power conditions when VVER-1000 units operate at 107% of nominal power capacity.

Other R&D studies include the development of new types of gas centrifuges, design optimisation of TVS-K assemblies for western design reactors, development of nuclear fuel for small-scale NPPs, floating power units and research reactors, as well as the fuel for new cores for nuclear-powered ice-breakers.

TVEL develops and produces nuclear fuel that meets the highest international standards and supplies it to a range of power reactors including the VVER-440, VVER-1000/1200, BN-600, BN-800, RBMK-1000, research reactors, and propulsion reactors.

Cutting-edge TVSA-PLUS and TVS-2M fuels enable power plant operators to improve the technical and economic indicators of nuclear plants through increased campaign duration and an extended fuel cycle. The second and third generation nuclear fuels for VVER-440 reactors enable the introduction of five- and six-year-long fuel cycles at power plants with uprated power. The fuel for floating NPPs with KLT-40s reactors, based on ship power plant technologies, meets non-proliferation requirements and uses uranium with enrichment below 20%. TVEL also supplies low-enriched fuel to research reactors. For example, in 2017, the first batch of low-enriched MP-type assemblies (19.7%) was delivered to Poland, for the Maria research reactor.

The fuel for VVER-1200 reactors makes it possible to operate a power plant with flexible fuel cycles of variable duration in load-following mode, including AES-2006 conditions of load manoeuvring on a daily basis (reactor capacity is increased up to 1200MWe).

To optimise fuel cycles, some VVER-1000 installations are fuelled by assemblies with mixing grids and axially profiled burnable absorbers. Plants with VVER-440 reactors are preparing for the introduction of third generation fuel assemblies.

The implementation of economically efficient fuel cycles of increased duration makes it necessary to introduce new types of fuel with increased uranium-235 enrichment.

TVEL has come close to solving the problem of using fuel with enrichment above 5% at VVER-1000 and VVER-1200 reactors. A recent trend is the extension of reactor campaign duration. However, there is a problem with a 5% enrichment limit when operating in open cycle mode as the fuel cycle lifetime increases, average fuel burn-up declines and relative uranium consumption grows.

Russian-made fuel assemblies are designed for operation with a burn-up level of up to 65MWd/kgU, but this potential cannot be fully realised because of the fuel cycle limitations. The solution for this is to use fuel with enrichment above 5%. Research by Kurchatov Institute showed that by shifting to average feed enrichment of 5.45% for 18-month cycles and 5.8-6.3% for 24-month cycles, it is possible to significantly increase the average fuel burn-up and reduce the number of fuel assemblies in a reload batch.

Preliminary studies show that a fuel cycle using such fuel would not increase uranium consumption, but would make it possible to reduce fuel-handling time.

Moreover, TVEL is engaged in the development and introduction of brand new fuel types. At unit 3 of Balakovo NPP (Saratov region), a pilot batch of TVS-2M assemblies is being tested, with part of their fuel elements fabricated from REMIX-fuel pellets. REMIX-fuel (REgenerated MIXture of U-Pu oxides) can reduce the amount of the accumulated spent nuclear fuel and save limited natural uranium reserves by closing the fuel cycle.

Also, 15 trial assemblies with mixed nitride uranium-plutonium fuel have been fabricated at Siberian Chemical Plant (a TVEL subsidiary, located in Tomsk region) and loaded into the BN-600 fast reactor of unit 3 at Beloyarsk NPP in the Urals region. Compared with traditional nuclear fuel, this product has a higher burn-up range and is compatible with liquid metal coolant. 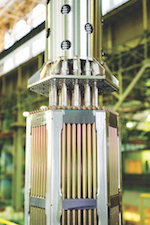 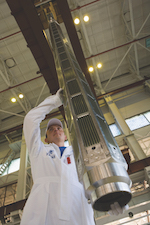