Half way - a review of post Fukushima actions in the Americas

After worldwide calls to action came in the wake of the tsunami that devastated Fukushima Daiichi in March 2011, nuclear power plants have been shoring up their defences for more than a year already. Much has already been accomplished; many projects are only months away from realization. By Will Dalrymple

Much of the USA's industry response has centred around flooding and seismic risk inspections ('walkdowns'), developing new connections to add emergency sources of cooling water, and buying mobile equipment (pumps, generators) to use in an emergency. This is the industry's so-called diverse and flexible coping strategies (FLEX) approach. In addition to holding this equipment in onsite stores, two offsite emergency equipment stores ('regional response centres') have been organized: near Memphis, Tennessee and Phoenix, Arizona, run by Pooled Equipment Inventory Co, and expected to be operational by August 2014.

In an April meeting with the US Nuclear Regulatory Commission (USNRC), Dominion Energy's president and chief nuclear officer David Heacock said that post-Fukushima changes will cost between $30-40 million per unit for the six-unit, three-station Dominion fleet (see Table 1). Heacock participated in the meeting as part of a four-member external panel. The briefing was organized to discuss the status of actions taken in response to lessons learned from Fukushima.

According to the NRC, US utilities filed integrated plans for developing mitigating strategies and installing spent fuel pool instruments in February; in November, NRC will issue safety evaluations. Implementation is due to be completed by the end of 2016. Operators' plant seismic and flooding walkdowns were completed in November 2012. At the April meeting, the NRC's Mike Johnson said that most utilities encountered problems on the walkdowns with issues such as barriers, missing seals, missing anchorages, or planned protective actions being overly ambitious. Some flood reevaluations were submitted in March 2013; other sites requested extensions.

As regards seismic reevaluations, industry proposed in April to use an updated seismic model that was initially rejected because it will not be complete until 2015. Industry's new proposal will use an interim evaluation based on the effects of the new data on a subset of emergency equipment such as the Reactor Core Isolation Cooling (RCIC) equipment in BWRs and the auxiliary feedwater system in PWRs, Johnson said in the meeting. The comment period for a new draft rule about station blackout mitigation strategies that includes spent fuel pool makeup capability recently ended (28 May). A final rule about onsite emergency response capabilities was predicted to be issued by the end of May. The NRC also predicts that guidance about the dose-assessment capabilities of multi-unit sites will be in place by the end of 2014.

Several issues remain unresolved, to a greater or lesser extent. Last year, the regulator voiced its preference for US BWRs similar to Fukushima to install hardened containment vents to reduce the buildup of gases. The industry opposed this measure and argued for a less prescriptive approach; in March it got its way, and the regulator promised to be more flexible in a planned rulemaking to come out in September.

The boundary between design basis and beyond-design-basis is also up for discussion. During the meeting, NRC chairwoman Allison MacFarlane, who has a PhD in geology, said: "There is a lot of discussion about extreme events. Let me help here. These are not extreme events. These are normal events. The failure is us, and our lack of understanding, and our inability to properly characterize the potential suite of events that can occur. That's because in part the science has not gotten there yet; but now we have moved the science along a bit, now we understand. This tells me that this requires everyone to revisit what design basis event is, what it includes. I would argue we don't need to be looking at beyond design basis, but readjust our definition, which brings us back to Recommendation 1 in part."

Recommendation 1 was perhaps the most ambitious of all of the USNRC's near-term post-Fukushima task force recommendations from July 2011: it essentially advised reform of the NRC's complex patchwork of historical regulations into a cohesive whole. The text ran: "The Task Force recommends establishing a logical, systematic, and coherent regulatory framework for adequate protection that appropriately balances defence-in-depth and risk considerations." That included drafting and beginning rulemaking of a "risk-informed defence-in-depth framework that includes extended design-basis requirements in the NRC's regulations as essential elements for ensuring adequate protection." At the time, it was controversial among both the industry and commissioners, and was not prioritized for early resolution. However, work has apparently carried on behind the scenes, and according to the NRC staff presentation at the April meeting, industry input was expected that month, and a paper is due out in December.

Canada's post-Fukushima directions published in March 2012 were, like many other countries, split into short-, medium- and long-term. Short-term actions that include topics such as installing passive autocatalytic (hydrogen) recombiners, verifying the bleed condenser relief valves, investigating extending I&C power following a station blackout and assessing emergency plans and equipment were submitted at the end of 2012. According to a Canadian Nuclear Safety Commission (CNSC) spokeswoman, they were all found to be acceptable. More substantial work is currently under way and due to be finished by the end of the year: reviewing capabilities of the shield tank (a unique PHWR station feature), evaluation of potential of hydrogen generation or structural deformation in spent fuel pools, probabilistic safety assessment (PSA) for selected external events, modelling multi-unit scenarios in severe accidents and beyond-design-basis events. Also due by the end of the year is an expected change in the law to require nuclear licence renewals or applications to include provincial/municipal offsite emergency plans with evidence of meeting those requirements. Other long-term work, to consider implementing a periodic safety review (PSR) process, to develop emergency management regulations, and to consider preventing or mitigating unfiltered releases of containment gases in a beyond-design-basis accident, is due either at the end of 2014 or 2015.

During 2012, Ontario Power Generation (OPG), which operates the Darlington 1-4 and Pickering 1&2 PHWRs, said that its post-Fukushima work involved the deployment of 12 portable diesel-powered pumps as well as the procurement of seven diesel generators with on-board fuel. It also installed new passive autocatalytic recombiners to mitigate hydrogen build-up at all stations. Canadian reactor vendor Candu Energy Inc. also signed an agreement for Enertech (part of Curtiss-Wright Flow Control) to market its passive autocatalytic recombiner (PAR) technology to reduce explosive hydrogen buildup to the nuclear industry in the United States and some international markets.

Post-Fukushima actions in Argentina, Brazil and Mexico were reviewed by the Latin American Forum of Radiological and Nuclear Regulators, to which the regulators of Mexico, Brazil and Argentina belong (as well as those of Spain, and Chile, Cuba, Peru and Uruguay). That association, formed in 1997, proposed in 2011 to carry out a Stress Evaluation among member countries along similar lines to that carried out in Europe: the scope and technical criteria were agreed by members, and results were shared between them. In June 2012, a group of experts nominated by member countries contributed to a review of countries' measures. That review, 'Stress evaluation of nuclear stations of FORO country members' was presented to the IAEA Nuclear Safety Convention conference in August 2012. It recommended further review meetings of short- and medium-term actions in 2014, and another in 2016 for longer-term actions.

Over the next few years, at Argentina's Atucha I and II (under construction) and Embalse, utility Nucleoeléctrica Argentina plans to install passive auto-catalytic recombiners and mobile diesel generators. At Embalse it will install new cooling water lines to reactors and spent fuel pools pumpable via a fire truck engine, and add filtered containment venting (FCV). A new emergency control centre will be built for the Atucha site by 2015; Embalse's existing emergency internal control centre will be modified to improve seismic resistance and improve air filtration capacity.

In Brazil, mobile equipment for water and air supply was scheduled to be brought to the Angra site at the end of March. By the end of the year, it will finish studies on earthquake design margins. By the end of 2014, all containment atmosphere control measures will be completed, as well as new SAMGs (severe accident management guidelines) for Angra 2. Mobile diesel generators for safety systems, batteries, water pumps to feed steam generators (SGs) and pools, and air compressors to actuate main steam and feedwater valves, are all currently under study. The Angra site offers 30 hours of steam-generator-based cooling before needing to refill the 6000t tank; that tank can be fed by firefighting pumps (although at a height of 110m). Stress evaluation results also showed the Angra 1 spent fuel pool has a minimum time-to-boil of nine hours (during refuelling; double that during operation) and Angra 2's five hours (during refuelling; five times that during power operation).

The Laguna Verde nuclear power plant, the only such plant in Mexico, has two boiling water reactors with fifth-generation Mark II-type containment. Both reactors were supplied by General Electric. Unit 1 started commercial operation in 1990; unit 2, five years later. Both units have a design life of 40 years. The Federal Electricity Commission (CFE), which owns the station, is in the process of obtaining a licence for its recent 120% extended power uprate. Early in its history, Mexico's regulatory body decided to apply the rules of the country of origin of the selected nuclear reactor; therefore the current regulatory framework is based on the USNRC requirements for nuclear power plants in commercial operation in the United States (and its three 2012 orders on beyond-design-basis event mitigation, hardened vents, and spent fuel pool instrumentation). In addition to the NRC regulatory framework, the Mexican Regulatory Agency has asked CFE for compliance with requirements and standards of the International Atomic Energy Agency (IAEA), to perform FORO?stress test, and to use external operating experience issued by the World Association of Nuclear Operators (WANO), in particular its three 2011 SOERs, or significant operating experience reports, on fuel damage, spent fuel pool loss of cooling, and extended loss of AC power. As a result of the evaluations mentioned above, CFE has developed a work programme that includes installing a separate vent of the primary containment, level instrumentation in the spent fuel pool, and implement a severe accident management programme according to the guidelines of BWR Owners' Group. Its deadline for these actions is 2017. 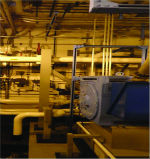 Before the new feedwater connection was installed at North Anna 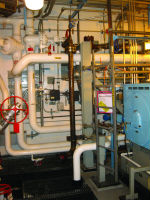 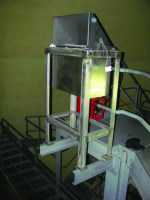