Going with the flow

The inspection of service water systems for signs of corrosion, degradation, leakage areas, sediment or debris buildup, and biofouling are an important part of nuclear facility maintenance plans, as Dave Malak explains.

In the past, inspection of buried piping was difficult, and plants had concerns about:

Hibbard Inshore has worked with nuclear facilities to solve these challenges by providing a suite of remotely operated vehicles (ROVs) of different sizes and capabilities. They have worked with clients such as Duke Energy, FirstEnergy, TVA and EDF to customise robotic inspection solutions for their piping and tunnels. Options include large ROVs with the ability to travel to over 20km from a single access point and small ROVs that can navigate through many bends in smaller diameter piping. Inspection of large diameter discharge piping and tunnels can be performed with some amount of flow velocity. This can allow the water for a unit to continue discharging while inspection occurs. Leakage can now also be detected in flooded pipelines and tunnels by using a Willowstick WILD electrical sensor attached to the Hibbard Inshore ROV. The sensor and ROV can determine where leakage is escaping the line even if the line is not under significant head pressure. Further visual inspection can be performed in those areas to show the nature of the leakage by showing corrosion or damage present

Duke Energy approached Hibbard about providing an internal inspection for a buried intake line at its McGuire nuclear plant. The pipe had a 30” diameter and five significant bends. During the inspection, it was imperative that nothing interfered with the operation of the pipeline, as it was the first line of defence in case of an overheating issue. Due to the critical nature of this cooling water pipeline, dewatering was not an option. The length, diameter, and many bends in the pipeline represented a definite safety risk in using a dive team. Hibbard Inshore was able to provide a small LBV600-6 vehicle that could fit into the pipeline, carry both video and sonar, navigate the distance of the line, and perhaps most importantly could navigate the many bends with very low friction. This reduced the risk of retrieving the vehicle.

Duke Energy first needed proof that the solution would work safely and that the ROV would navigate the bends in the pipe without risk of being stuck before allowing it to inspect in the actual facility. Because of this, Hibbard Inshore worked to fabricate a pipeline of the same size with precisely the same bends at the actual facility. Once the test pipe was fabricated, Hibbard Inshore and Duke presided over testing where the test pipe was flooded, and the ROV provided a test inspection. During the test, the force to haul back the vehicle was measured at strategic locations throughout the pipe. Hibbard Inshore demonstrated the ROV’s ability to safely manoeuvre the bends in the mock pipeline, and Duke determined that the risk would be low enough to use this method of inspection in the actual line at the facility.

During the official inspection, Hibbard Inshore’s pilots successfully navigated all the bends, travelling 1851ft (564m) of the pipeline and profiling the interior surface in its entirety. 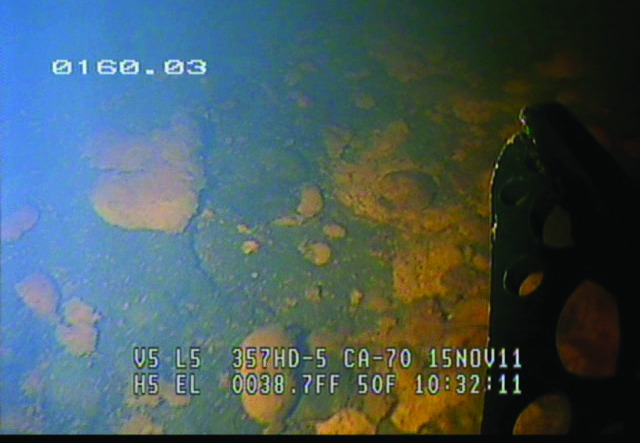