Westinghouse has taken a key step forward in the development of its 225 MW Small Modular Reactor (SMR), completing the design, fabrication and start of testing on the first fuel assemblies.

The fuel design for the Westinghouse SMR is based on proven materials and designs, and uses currently licensed methodology as much as possible. This should reduce the Nuclear Regulatory Commission (NRC) review of the Design Control Document by many years. For example, an advanced alloy, licensed by the NRC, will be used in the fuel rod to ensure the appropriate fuel rod operating margin is achieved. Development and licensing of a new alloy can take 10-20 years as in-reactor experience is mandatory as part of the licensing process.

Initial core sizing was performed in 2010, and development of mechanical fuel design started in the summer of 2011. The fuel design is based upon proven Westinghouse Robust Fuel Assembly (RFA) technology. To date more than 18,000 RFAs have been delivered to customers around the world, providing extensive in-core operational experience. RFA also is the technology that will be used for AP1000® nuclear power plants.

SMR core size limitations, power requirements (800 MWt) and fuel cycle length will result in a core consisting of 89 fuel assemblies with a radial reflector. The core has an eight-foot active fuel stack based on customer requirements for an economic two-year cycle and the size requirements of a rail-shippable reactor pressure vessel (outside diameter 3.5m, height 24.7m).

The components of the fuel assembly design were chosen from the RFA product line due to its vast operating experience. The RFA products have been used on 12-foot cores with intermediate flow mixer grids and 14-foot cores such as the AP1000 PWR fuel design. The thimble tube is a thick tube design introduced to eliminate incomplete rod insertion (IRI). Use of RFA fuel has eliminated IRI in plants where it had occurred. The Westinghouse fuel design supports the burn-up limits currently licensed for the rest of the Westinghouse PWR fleet in the US (62 GWD/T lead rod average). The SMR fuel burn-up will be within this limit.

For the fuel rod cladding, Westinghouse had two proven, licensed alloys that have been used in the RFA fuel designs. These are ZIRLO® cladding, which is used in the AP1000 PWR fuel design, and Optimized ZIRLO™ cladding. One of these alloys will be selected for the SMR fuel assembly, based on the operating conditions and operating strategy of the plant. If design calculations indicate that more corrosion margin is needed in the fuel rod design than ZIRLO provides, the Optimized ZIRLO cladding will be chosen.

The major failure mechanism for PWR fuel over the past several decades is fretting wear. This is the primary unknown with respect to the SMR fuel assembly. Since the new SMR fuel design has different axial height and grid locations as compared to other current RFA fuel, the fuel rod vibration characteristics are unique. Therefore, Westinghouse is performing a wear test to ensure the SMR design has acceptable fuel rod fretting wear performance.

The long-term hydraulic test is performed in the VIPER test loop at the Westinghouse Columbia Fuel Fabrication Facility in Columbia, South Carolina. The VIPER test loop is designed to hold two full-scale, PWR test assemblies that are placed side-by-side. The maximum operating temperature is 400°F (204°C), the maximum pressure is 350 psig (238 MPa), and the peak flow rate is 7000 gpm (442 L/s).

The manufacturing and assembly of two SMR nuclear fuel test assemblies was completed at the Westinghouse Columbia Fuel Fabrication Facility in June. The test assemblies went through the same manufacturing processes as do actual fuel assemblies, with the exception that natural uranium was used in the fuel pellets (enriched uranium pellets are not allowed in a hydraulic test because of criticality concerns of placing the fuel assembly in a moderator). Since the SMR fuel is shorter than typical fuel, there were some automated processes that would not work, so special steps were taken to get these two assemblies through the manufacturing system. When future production takes place, changes and updates to the manufacturing process will be performed to improve the efficiency of producing SMR fuel assemblies.

After hydraulic testing is complete and the initial SMR fuel design is shown to meet design and operational requirements, the initial phase of the fuel development will end. Then the DCD will be submitted, after which detailed fuel design work will begin. The fuel design will be validated and confirmed relative to the changes in inputs during the overall reactor development. 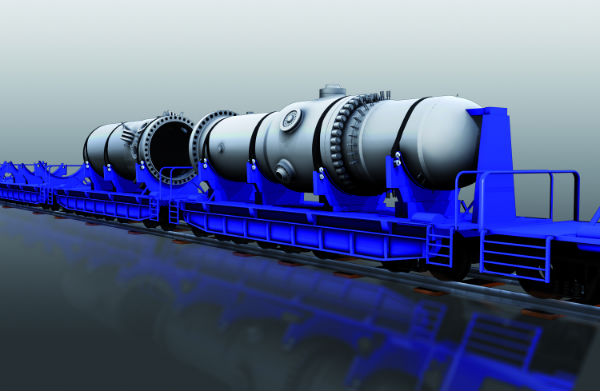