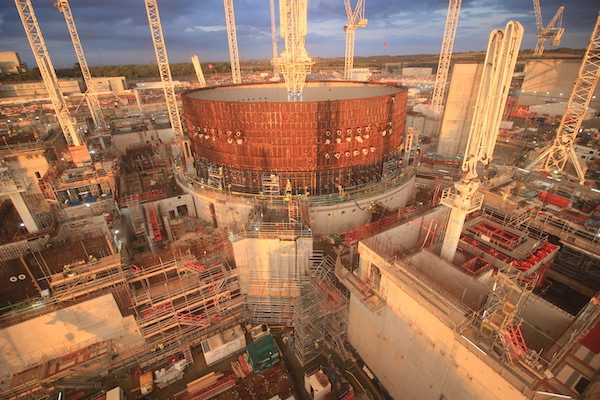 Next year will see the reactor pressure vessel for Hinkley Point C (HPC) arrive on site, according to Humphrey Cadoux-Hudson, chief executive of Sizewell C, the planned follow-up plant to HPC

Speaking at the Westminster Energy, Environment & Transport Forum policy conference ‘Next steps for developing the UK nuclear sector and delivering new build projects’, Cadoux-Hudson was keen to highlight the importance of reducing the construction cost and risk of new nuclear by “making a copy”. He illustrated that by reference to the two units at HPC, saying that, for example, at the second unit 45% more steel had been installed in a comparable time frame, and the time required to install a unit 2 cooling system had been half that at the first unit. He added that “right first time by experienced people” also resulted in better quality.

Cadoux-Hudson had no more news on how negotiations with the government on a ‘regulated asset base’ (RAB) funding model could be used for Sizewell C, beyond saying that the company was having “very good discussions with government”. And although a detailed policy document on the RAB model has been expected for months, Anne-Marie Trevelyan, government minister for Energy, Clean Growth and Climate Change, in an address to the World Nuclear Association (WNA) annual symposium, said only that negotiations “had been taking place”.

Exploring the figures behind the RAB option, Cadoux-Hudson said that of HPC’s £92.50/MWh price, only £12-13 was the cash cost of construction. Operation and waste management represented another £25 “and the rest is the cost of finance”. Of that, half would be the cost of capital allowed for a regulated asset and “the other half is the risk of attracting private finance. If we can reduce that the cost of capital should come down”.

But comments by Darryl Murphy, Head of Infrastructure ­— Real Assets, at Aviva Investors, suggested that might not be reduced as much as had been hoped. Saying that appetite from private investors had so far been “minimal”, he noted that the character of the Sizewell C project was very different from that of other RAB projects, which are generally networks. In addition the scale was very different: the Thames Tideway Tunnel, often mentioned as a comparator, was less than £5 billion. Sizewell C was nearer the scale of the recently-announced UK Infrastructure Bank which would be capitalised at £22 billion. The project “needs a range of debt and equity investors,” Murphy said and that required a “very delicate” balance of risk between government, consumers and investors. Potential investors would want to see political commitment to nuclear beyond a single plant – and SMRs, he noted “feel a long way away”.

Murphy said the ESG case “is critical if the large scale capital required is to be mobilised” and that point was discussed in detail by Fiona Reilly, managing director of FiRe Energy, at the WNA annual meeting. She said that “A lot of green money has gone into climate finance and you [nuclear] need to be able to access it”. To do that it was necessary to make nuclear an ‘investable asset class’ and it had to solve the ‘ESG problem’ – ie meeting ‘environmental, social and governance’ levels. She said ESG investing was a data collection, metrics and reporting issue for financiers who need to report against those metrics, she said.

She warned that the metrics used were not currently consistent or standardised. Nevertheless, nuclear should be able to report against ESG as with any energy project, because “all energy projects have an impact that needs to be assessed”. Such metrics would allow financiers and industry “ to show nuclear as an asset class to its board or its investment committee”. With metrics in place “the obligation is on you” as a nuclear industry to report well against them, she said. Murphy agreed that without an ESG case, much else about the investment “will be irrelevant”.

Also speaking at WNA, Nick Stansbury, head of climate solutions at investment managers LGIM, had a direct challenge for the nuclear industry. Giving his view, he offered ten ‘truths’ as seen by the investment industry, staring by laying out the climate issue: climate change is a ‘big deal’ for finance markets and in the near term; fixing it is hard because energy, the ‘engine of the world economy’ had to be rebuilt in 30 years; each year’s delay could add a trillion dollars to the bill; nuclear should and can play a ‘very meaningful role’. Other ‘truths’ were that nuclear is safe; it is reliable; it is cheap – but only in some jurisdictions and ‘no-one can explain why the cost structure in developed economies has been allowed to rise so dramatically’; and credible sources say that without nuclear solving the climate crisis will be very expensive.

However, his final truths were that on average across the globe three fifths of people oppose nuclear, and that “investors can’t fix these problems and there is no evidence that the nuclear industry is particularly galvanised to do anything about it”.

Insisting that “the problem is not one of financing” (although he said there were “complicated questions” around that), he said “what are you [the industry] doing about it?” He mentioned funding for research, convincing NGOs and other initiatives. But fundamentally he said the industry had to inspire confidence and that suggestions that the only way to find plant was to transfer all construction risk to governments and consumers “does not fill me with great confidence”. The industry had to be able to deliver plant on time and on budget: “are you willing to put your own money at risk and your CEO bonus?”

Janet Wood is an expert author on energy issues

The regulated asset base (RAB) funding model is under consideration for future nuclear plants, including Sizewell C (Photo credit: EDF Energy)
Post to: