Where next for Nexia? 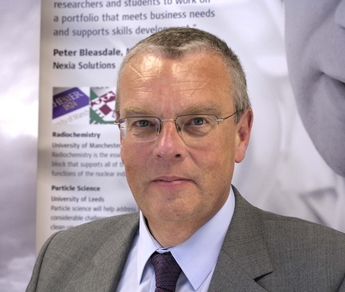 Now that BNFL has been given the go-ahead to sell British Nuclear Group (BNG), and with the contract to sell Westinghouse signed, all that remains of the former nuclear giant are its share in Urenco and nuclear technology business Nexia Solutions. As BNFL continues on its mission to confine itself to history, Nexia managing director Peter Bleasdale spoke to NEI about the outlook for his company.

Representing essentially all that now remains of the once considerable body of R&D expertise in the UK, Nexia comprises a workforce of around 750 based at technology centres in Sellafield (including the former AEA Technology facility at Windscale) and Springfields, sites which are owned by and leased from the UK’s Nuclear Decommissioning Authority (NDA).

But with the major restructuring taking place in BNFL, and the UK’s nuclear industry as a whole, “we need a new home,” according to Bleasdale. “When Westinghouse is gone and if and when BNG goes, then essentially there’ll be Nexia Solutions and the Urenco shareholding left. And I think that really isn’t the reason for maintaining BNFL.”

BNFL has said it expects the sales process of BNG to be completed by autumn 2007, perhaps earlier if possible. What’s left of BNFL’s corporate centre will be closed down after the sale – which doesn’t leave much time to decide on the future of Nexia.

Bleasdale said his company’s preference is that Nexia remains in government ownership – an outcome that is “not a foregone conclusion,” but certainly very possible. Bleasdale noted that in 2003, when the then secretary of state for trade and industry Patricia Hewitt announced the creation of the NDA and the restructuring of the UK’s nuclear industry, she said that what is now Nexia Solutions should be retained in government ownership in order to maintain the skills base. Since then, the organisation has been considering its future and is currently discussing its future options with the government.

“So where we’ve got to at the moment,” continued Bleasdale, is whether the UK needs a national lab. The form such a national lab might take could be similar to that of the National Physical Laboratory at Teddington, he said, where there is “a group of people that are principally engaged on government work. In order to reduce the cost to government they do work for third parties, but not in a way that detracts from their essential requirement for government.”

Bleasdale does not think that the concept of a national nuclear lab is controversial, but what does need to be resolved is the form it would take. “We believe government ownership is the answer,” he said, pointing to the skills drainage in the UK over the past 20 years or so. “I think that the market failure is an issue that is of concern. We need to take into account how to preserve these skills to underpin the safe and efficient operation of the industry in the UK.”

Bleasdale thinks it is crucial that the nuclear skills capability is maintained. “Maintenance of capability is an important thing for us,” he said, citing the fact that, until recently, there was no radiochemistry department at any UK university. “So what we did was to set up four alliances with universities” – one each at Leeds, Sheffield, the University of Manchester Institute of Science and Technology (UMIST) and at the University of Manchester (with the last two combining). “And we’ve built up groups in each of those alliances of about 35 people. So we’ve created 140 jobs, mainly post-docs, in order to make sure we can get the right raw material from the universities into our business. And we think that those relationships with the universities should also be a core part of the national lab.”

With nearly all the UK’s nuclear technology expertise within the company, Bleasdale believes that Nexia is a unique resource that must be preserved. Though the exact number is not clear, he estimates that two decades ago there were of the order of 9000 people involved in nuclear technology. “And essentially what’s happened is that technology capability is contracted so now it rests almost solely within Nexia,” he said. The company “is the only organisation that can give us cradle-to-grave advice on reactor designs through to cleanup.”

Even in its brief history, Nexia itself has also been through a process of consolidation. In 1996, the company began to streamline its research and development activities in order to remove any duplication within the company. Over about eight years, the company has gone from a peak of around 1700 employees to 750 today. The process of “right sizing” has been a response to “the downturn in work coming from customers because of the way that the industry’s set up now and the concentration on short-term work,” said Bleasdale, “so we’ve had to respond to change in revenue from customers.”

But now the company has demonstrated that it can survive in a competitive market, according to Bleasdale. With an approximate annual turnover of £85 million, “we’ve had a successful year and we’re going to exceed our financial targets.”

Before the NDA was set up, Nexia could rely on its privileged status as preferred contractor for its sister companies. Back then, “people didn’t go out to competition, they just gave us the work and we did it,” said Bleasdale. “And we didn’t make any profit. We didn’t actually have a great desire to reduce costs – money came automatically.

“What the NDA’s done, which I think is good for the taxpayer, is to say, ‘focus on getting costs down; get the research from the best place that you want to’, and we are one of the bidders into that, so we don’t have anything as a right.”

While Nexia has some facilities that are “pretty special,” Bleasdale said that now, “if there were packages of work that others can do then the site licence companies would be competing them.” Despite the major change for Nexia, he said the company has won the contracts it has wanted and been able to meet its targets.

One of the “pretty special” facilities is the new Sellafield Technology Centre (STC), which is still in its commissioning phase. The STC was “designed in a previous era,” said Bleasdale, but since then, there’s been a downturn in work that was originally expected. “That building isn’t fully operational yet but it’s coming on stream as the business demands it.” Also at the neighbouring Windscale site are some highly active cells acquired from AEA Technology, which are used for post-irradiation examination work on behalf of British Energy, as well as work for the Ministry of Defence’s submarine propulsion programme. There are also going to be more highly active cells (plutonium capable gloveboxes) within STC, as well as a large rig hall.

Bleasdale continued: “The only thing that we don’t lease from the NDA is a facility at Workington,” which is used for non-active work. “Then we’ve got a facility that was opened in the late 1990s, which is a uranium capable facility. And we have people based at Risley and a few people at Harwell, that came out of AEA Technology, and a few people at Berkeley who came out of their technology and engineering laboratories down there.” In order to reduce costs, the highly active cells at Berkeley were closed and the work transferred up to Windscale.

Bleasdale said the company is able to support the entire range of the UK industry, from operation through to cleanup. In addition, he would like the company to be in a position where it can give independent advice to the government. In the past, he said, the relationship with Westinghouse has made it difficult for the company to be viewed as unbiased on, for example, an appropriate reactor design for a possible new build programme. “We don’t do research at the moment into reactor designs,” he added, “but what we’ve got is a handful of people that essentially would form the core of an intelligent customer base for selecting the next reactor design going forward.”

Bleasdale stressed that the focus is now very much on the bottom line. “Customer focus is really what we’re about now rather than scientific elegance.” In the past, he said, “we were probably guilty of providing the Rolls Royce solution and now we’re saying every project doesn’t need to have a Nobel prize at the end of it. If you can do it with a shovel, then do it with a shovel.”

In the first six months of Nexia being set up, with an outlay of some £40 million, “we generated advice and solutions to problems for our customers that are worth half a billion,” he said. “So the gearing is then 10 or 12 to 1 for more money invested in us that we can give back to those organisations.” Of course it’s down to the customer as to whether it acts on Nexia’s recommendations.

Asked for examples, Bleasdale pointed to work on the disposal of radioactive sludges in Sellafield’s B241 sludge tanks. “You dispose of those sludges by mixing them with concrete and put the cement in drums. The cost of cleaning that up is directly related to the number of drums that you use.” Nexia carried out research in the cement chemistry to reduce the amount of water in the cement in order to get more solution into each drum. As a result, the number of waste drums needed for the waste was approximately halved. “And that’s about £80 million that we’ve saved as a result of not having to store those drums.”

A smaller-scale saving was achieved on a survey carried out on some trenches at Sellafield that were last used in the late 1950s. Although maps of the trenches exist, Nexia was asked to verify the maps. “Now, there was £6 million in the budget for this and they expected us to put boreholes down,” said Bleasdale. Instead, Nexia used ground penetrating radars to carry out the survey – an idea that Nexia “stole” from the popular archaeological TV series Time Team. “We not only found exactly where the trenches were, but we also could see the shapes of things inside.” The cost of the survey came to only £200,000. “So they got a heck of a lot more information – and a lot cheaper.”

Bleasdale added that there had been a long-standing rumour on the site that, following the Windscale fire in 1957, a fire engine had been put into the trenches and, during the survey, “we found the outline of a fire engine!”