Uranium – what are the dynamics between China and Kazakhstan? 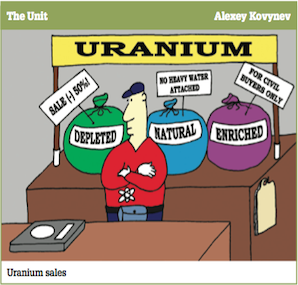 China has relied heavily on Kazahstan for uranium needs. However as the Chinese programme slows, it has become time for the world’s top uranium producer to look to other markets. By Steve Kidd

It is now common knowledge that Kazakhstan has become easily the world’s leading producer of uranium, with an incredible expansion since 2005 from around 5000t per annum to over 20,000t (out of a world total of around 60,000t) in each of the past few years. This has happened at a time when overall production in the remainder of the world has been static, with a decline in Australia offset by small increases elsewhere. Almost all of the 50% increase in world production since 2005 can be attributed to this one country.

This has happened at a time where the world demand for uranium, measured by reactor requirements, has remained stable at close to 60,000t per annum. Reductions in Germany and Japan have been matched by increases elsewhere, notably in China but also in other countries where reactor numbers are expanding.

To some extent, the world production expansion has offset a reduction in secondary supplies coming to the market. The HEU deal between Russia and the USA has ended, but there have been compensating increases in secondary supplies, particularly from the enrichment companies either “underfeeding” or “re-enriching” (almost magically creating additional uranium). So overall secondary supplies have only fallen by a few thousand tonnes each year.

The net effect has been a substantial increase in world uranium inventories of approximately 150,000 tonnes since 2005 (but concentrated very much in the second half of this period). There have been increases in the European Union, the USA and Japan (after the Fukushima accident in 2011) but easily the biggest explanation is the amazing level of Chinese buying.

Most people also know that China now has the world’s biggest nuclear building programme. It has 37 reactors in operation and 20 of the 58 units currently under construction. Its annual uranium requirements are therefore now rising very rapidly, from 2000t per annum in 2010, to around 7500t today and 11,000t in 2020. Yet China’s uranium purchasing has run well ahead of this. Trade statistics show that since 2010, China has imported 120,000t of natural uranium to add to domestic production of around 9000t over these seven years. Matching this with calculated reactor requirements indicates an inventory build-up of 90,000t in this short period.

We do not know much about the level of Chinese inventories before the heavy importing started in 2010, but a guesstimate is 10,000-20,000t. It could have been more. China therefore now has a strategic uranium inventory of at least 100,000t. Building this up has been a key element in China’s nuclear strategy. Relatively poor domestic uranium resources have long been the biggest fear within China about undertaking a large nuclear programme. Could it be excluded from the world uranium market by economic sanctions?

This may appear far-fetched today, when uranium producers from around the world are keen to do business in China. Lingering barriers to supplying directly from countries such as Australia and Canada have gradually been removed. But the world can change and China observed carefully how Indian reactors went short of fuel when that country fell outside the world market politically.

China’s uranium buying has been the mirror image of the Kazakh production boom, with 70% of China’s imports sourced from there. The remainder has been acquired from countries including Australia, Canada, Namibia and Uzbekistan. From another angle, Chinese imports account for just over half of Kazakh production since 2010.

This raises interesting questions. Will this level of Chinese buying persist or will it drop away at a target level of strategic inventory? Or will it increase further if China starts approving lots of new reactor projects again? What is the strategic target – five years of forward requirements in 2020, 2025 or 2030? How big will the Chinese nuclear programme be in the 2020s? Given that there are currently two uranium-buying entities in China (CNEIC and CGN-URC), to what extent is the uranium purchasing and inventory level coordinated and managed centrally? We know that there is a degree of competition between these organisations, but to what extent does the Chinese state force an optimum strategy? Can China possibly squeeze more production out of its domestic mines, as it clearly plans? Can it establish a major reprocessing plant by 2030, saving on fresh natural uranium – also part of its stated strategy? What will happen when Namibia’s new Husab uranium mine, effectively owned by CGN-URC, ramps up production to 6000t per annum? Is Kazakhstan’s production level threatened by this and by China contracting with more companies from different countries? Will China invest in further large overseas uranium mines? And, can the Chinese begin to dominate the world uranium market?

The question about China’s dependence on Kazakhstan has been brought into focus by the continued weakness in the uranium market, with prices stuck in the low US$20s per pound, plans for a 10% production cut in Kazakhstan this year and signs that Chinese nuclear expansion is slowing sharply.

China’s uranium import peaked in 2014 and so did sourcing from Kazakhstan. Imports from Kazakhstan were over 3000t lower in 2016 than in 2014. Hence Kazakhstan has been strengthening its uranium marketing in other countries. It has had some success in Russia, where ARMZ’s acquisition of Uranium One provides better direct access to Kazakh supply. But the Russian market is soft, as the reactor programme slows under technical and financial issues and reactor exports are slow to materialise. Russia also has abundant secondary supplies, with surplus enrichment capacity and re-enrichment of tails as important as in the West.

One suggestion is that China has over-cooked its uranium imports, having bought at a level appropriate for a much larger programme than will finally see the light of day. But what does China want in its strategic inventory? This is very opaque but certainly China has paid prices way above today’s spot price level. But most buyers went on a contracting spree in the years between the price peak in 2007 and the Fukushima accident in 2011. China will justify its buying in terms of security of supply, but does it need to enhance this still more?

Husab’s production is an interesting question. On the assumption that about two thirds of it will go to China (it may amount to more than this, given difficulties in selling incremental output at good prices in an oversupplied world market), an additional 4000t will soon be on its way there. It is reasonable to see this as eating further into China’s imports of material from other countries, and that must include Kazakhstan.

It is also reasonable, however, to believe that there will be no sudden uncoupling of the link between Chinese demand and Kazakh supply. Instead, that is likely to happen gradually over time. Given the good relationship, there will still likely be a strong flow of uranium from Kazakhstan to China in ten years’ time and beyond. More of it will be from Chinese joint ventures there. But China wants to have more control of its uranium supply via equity investments, and that will inevitably go far beyond Kazakhstan and eventually beyond Husab too.

Slowing sales to China are undoubtedly a major influence on the recent Kazakh production cut. The gradual uncoupling of the Chinese-Kazakh relationship and the need to sell much more in other markets explains national producer Kazatomprom’s new marketing focus and, in particular, to its plans for a trading subsidiary with an office in Switzerland. Some success has been achieved in recent years in selling more uranium in the USA, but progress in Europe has been limited. A soft market has not helped and winning a higher market share in such an environment is far from easy. But if Kazakhstan is to limit its reduction in overall uranium output to the announced 10%, Kazatomprom must certainly deliver on its intentions to sell more everywhere outside China. Even if Kazakh production falls to 22,000tU in 2017, it will still represent approximately a third of world demand.

Kazatomprom is likely to market an increasing share of national output, as it is generally expected that it will take back shareholdings from some of its joint venture partners in its operating mines. An agreement with Cameco at the Inkai mine may be replicated with other partners (particularly the Japanese who, in any case, have largely not taken up their entitlement to material since the Fukushima accident in 2011). Kazatomprom’s supply from Inkai is set eventually to rise to 60% of increased output of 4000t, as opposed to 40% of 2300t in 2016. The Chinese joint ventures may be an exception to this, as China’s international uranium strategy is clearly to take equity in its supplying mines and Sino-Kazakh cooperation throughout the overall fuel cycle is expanding.

Kazatomprom clearly feels it has missed out on sales opportunities in Europe and North America by lacking pricing flexibility and by being too slow and bureaucratic to respond to opportunities. It now intends to offer a much wider range of options to its customers in terms of the types of contracts that it signs with them. This will include relatively small spot market deals, but also new formats on longer term contracts, taking on board what the trading and financial community has achieved in recent years in increasing overall market liquidity.

One can see a new trading operation within the world’s largest producer as yet another attempt to reform the uranium market. Most uranium continues to be sold under opaque long- term contracts negotiated by uranium producers and nuclear power plant operators. Attempts to reform this over the years, for example by standardising contract formats or establishing a uranium futures market with NYMEX, have found little favour in a conservative industry.

Kazatomprom’s evident desire to maximise its uranium sales clearly also has important implications for the overall level of uranium prices. As a low-cost producer with a currency that has fallen sharply against the US dollar in recent years, it is in a good position to defend its overall market share (given the reduction in the Chinese business) and possibly expand it. Low prices are not welcome to any producer, but profit targets can be achieved by selling more in new markets.

This must provide further support for those who believe that uranium prices are set to remain in the US$20s per pound for a long period, maybe throughout the whole of the 2020s. This period would therefore be a re-run of the 1990s, when prices were stuck around the US$10 per pound level for over a decade. After the new mines at Cigar Lake in Canada and Husab in Namibia, no further major new mines may be necessary, as Kazakhstan can take up market slack.