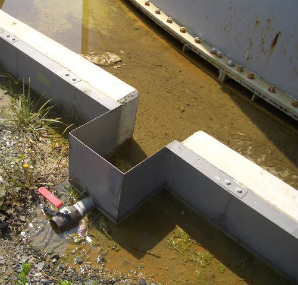 There are two types of leaks of contaminated water at Fukushima Daiichi: uphill and downhill. There have been recent news reports about both types, including a regulator's assessment of INES level 3 for the uphill leaks. But I think it is best to consider the two as completely separate.

The downhill leaks occurred around the reactor buildings and the seawall. These were mostly discovered early in the Fukushima emergency in 2011, and the high levels of radiation were suspected to come from the reactors, although the containment path was not clear. These leaks were serious partly because they were highly radioactive, partly because they were very close to the then-unprotected sea, and partly because they occurred in a context of great upheaval on the site as a whole; these were scary leaks because so much was unknown. The downhill leaks were essentially part of the emergency situation, and involved improvised emergency repairs. (In the meantime, much work has been carried out to isolate the station from the sea: water intakes have been closed with steel sheet, the inlet canal for units 1-4 (and 5&6) have been closed by silt fences; the inlet canals' seafloor has been concreted to prevent contaminated sand drifting out of the quay).

These are serious issues. However, there are three things to keep in mind. First, TEPCO has pointed out that contamination levels are occurring in a context of a declining trend. Second, offshore readings have not changed; this contamination seems to be contained on site, and is (so far) not reaching the open water. Third, a programme to wall off the reactors from the sea using sheet piles, which began in April, is now in progress and is due to finish in late 2014.

There has been much recent concern about leaks in another part of the Fukushima site, on high land to the west overlooking the reactors, where hundreds of underground and above-ground tanks have been built to store the contaminated water generated by cooling the damaged reactors. Although constructed on an accelerated schedule, these are brand-new structures built from standard factory-built kits. They are a long way from the sea, and include engineered barriers preventing the spread of contaminated water.
In August one of the 900-odd 11m-high cylindrical bolted tanks now storing radioactive water was found to have leaked. Further analysis determined that 300 cubic metres was missing. This was no doubt a big leak. But it was different only in extent from the many other site spills that have been occurring ever since TEPCO started to pump contaminated water on the site. The uphill part of Fukushima Daiichi now resembles a pet store with a bank of aquariums; an immensely complex network of pipes moves water of all types all around the site. A vast new water treatment plant has been built to treat the contaminated water for eventual release into the sea; another system diverts groundwater flowing downhill away from the reactors. Pumping water and mopping up contamination has become part of daily life on site.

So although we might enquire how such a large volume of water -- 300 tons, about the amount of a small public swimming pool -- was allowed to accumulate before it was noticed, and whether monitoring processes are sufficient, these queries are in a way beside the point. Unlike around the reactors, which remain something of a disaster zone, the uphill spaces are a new, artificial and controlled environment: a tank farm. Surely established processes exist in the petrochemical industry to manage and contain fluid flows and leaks. Come on, TEPCO; it shouldn't be that hard.

Will Dalrymple is editor of Nuclear Engineering International