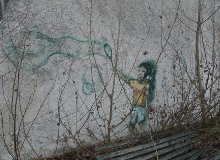 Twenty-six years after the incident, I visited the site on 27 November, on a press tour to the construction of the new shelter. Now, a generation after the explosion, the fear and the anger of the people that must have come in its aftermath, was long gone. In fact, the few people I talked to on my trip seemed proud of their country in spite of its troubles, and confident that Ukraine is on its way up.

I received a different message from the first stop on our tour, after the checkpoint, the nuclear ghost town Pripyat. As I roamed around freely (the rules were don't go in the buildings, and don't touch anything) I saw some modern graffiti that was whimsical, but sad. Near the abandoned May Day ferris wheel, with the tattered remains of a bumper car enclosure, there was a spray-painted picture of a boy making bubbles. Up high on a building near a set of stairs was a painting of a child running toward a door. Combined with the utter silence of the place, and the slow decay of the buildings and the streets, these murals gave me a terrible feeling of loneliness.

A totally different kind of weirdness hung around the new safe confinement building site, where I witnessed a hundred metres of graceful arching structural steel truss, hanging 20 metres in the air. Here, there is construction on an intergalactic scale, right next to the Chernobyl sarcophagus, as if nothing ever happened.

What I now realise I was seeing was not only a gigantic piece of metal, but also the process that created it, the gleam of the oiled machinery of European banks, construction contractors and elite engineers, a kind of steam engine of project management. It was an awesome sight.

The Shelter Implementation Project engine runs on the generosity of the 40-plus donor nations, who have made the project, halfway between Paris and Moscow, possible. Looking over the list of donors, two sorts stand out. First are the really big donors from nuclear countries in the tens of millions and above: the EC as a bloc, the USA, then the UK, France, Germany, Canada, Japan, Russia, Italy and Ukraine of course. But I am also struck by the multi-million-euro contributions from unexpected non-nuclear countries: Austria, for example, or Ireland, Kuwait, Norway and Denmark. Although the early stages of emergency response would have had to have been a Soviet problem, these donors have helped support the project after the dissolution of the Soviet Union.

After our site visit we headed over to the Chernobyl unit 1 administration building, outside of which is a memorial to the firefighters who lost their lives in the early days of the accident.

We filed in to a wood-panelled conference room, where key project leaders spoke. What sticks in my mind now is what the Chernobyl NPP director general, Igor Gromotkin, said. He compared the new safe confinement roof to the Eiffel Tower; its span is comparable to the height of the tower to its third viewing platform (257m vs 279m). And like the Eiffel tower, it is intended to be a temporary structure. But, he went on to say, more than 120 years after it was built, they still haven't taken down the Eiffel Tower; it has become an icon of Paris. This building, he said, will become an icon of the Ukrainian nuclear industry, and people will come from all over the world to see it.

At the time, that statement seemed to me to be of the usual sort of hackneyed promotional nonsense. But as I look back on the scale of the project, the beauty of the design, the high-calibre international management, the large budget, and the significance of the site, I am not so sure.