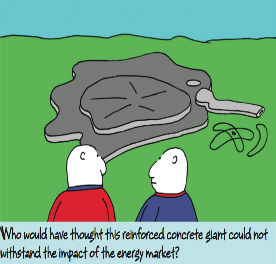 As the current nuclear fleet struggles to maintain its competitiveness in some markets, Jeremy Gordon suggests that expansion into heat or hydrogen production could help secure a profitable future.

Investing very heavily in renewables was a deliberate act by Germany to create the future it wanted — one of a renewable-powered circular economy. Whether that is achievable remains to be seen, but the country succeeded in mobilising huge funds, human resources and goodwill towards creating it. Simultaneously leading and responding to advances in renewable technology and Chinese manufacturing, the German desire to shape reality has succeeded — to an extent. Renewables have seen enormous reductions in cost, which in more and more cases make them the cheapest sources of electricity. If you want to push electrons down a wire, solar photovoltaic is now the easiest way to do it. And for those who prefer wind, the turbines have scaled up to titanic proportions and batteries have emerged to smooth out voltage and frequency fluctuations.

Of course, it takes a lot more than cheap sources of electricity to make a proper electrical system for a country, but the point I’m making is this: Germany set out to shape the future of electricity — and had a big influence on it. And now, whether they subscribe to Germany’s dream or not, every country is able to deploy renewables more cheaply thanks to its investment.

The same was true in nuclear once, when we saw a handful of pioneering countries, most especially the USA, create the foundation of the nuclear industry as it stands today. In those early moving countries, engineering-led industries buoyed by centralised spending and policies booted-up some decent technology and exported it to allies abroad (or at least tried to). Now only China and Russia remain in that kind of paternal role, while private sector startups from the USA, Canada and Western Europe have taken on the challenge of bringing the next generation of technology to bear. We therefore have two general tracks for new nuclear products to come to market — national initiatives, and the startup scene.

The big problem is one that’s very familiar — developing new nuclear technologies just takes too long. Even the actions we hope will speed things up, such as getting on top of construction costs, obtaining some clarity on global climate policy, harmonising regulation and standardising reactor designs, are all taking too long. With nuclear power’s rate of innovation, it is simply not possible for us to create our own future before somebody else creates it for us.

Two serious risks present themselves for the industry. The first is that without a certain amount of support and facilitation, today’s fleet of large light-water reactors might be allowed to decay substantially in the coming age of surging cheap renewable electricity. Before markets are revised in a way that values nuclear’s contribution to the grid, some other solution could emerge to fill the need. The other risk is that the nuclear industry will bring forth a right-size, flexible power unit that is safe enough to site anywhere — but only after the other sources and all their auxiliary systems have developed to the point that it is now a wrong-size too-late solution.

Worst of all is the scenario in which both of those things happen, nuclear operators lose the will to fight for today’s fleet and it lapses into early retirement at a time when there is no upgrade available from industry. Nuclear owners and operators are still minded to invest in it, should conditions allow, but when was the last time you heard about a totally non-nuclear energy company wanting to get involved? Once companies leave this sector, they don’t tend to come back.

Nuclear does not lack ambition for 2050, at which time the potential for its technology should stretch from small reactors supporting remote communities as far away as Mars to gigawatt-scale fusion plants supporting new Asian gigacities, with everything in between for heat and light. The public image of these future technologies is great, and a broad swathe of people in clean energy circles can envisage them playing a role. However, the industry’s ambition for the units that are the mainstay of the current fleet is simply to lose less money in malfunctioning markets. Perhaps it is no surprise that they are tolerated (at best) by other clean energy advocates.

In the present day, it is more important than ever that nuclear plants should get some incentive for their status as low-carbon generators and for being a huge net win in environmental terms, compared to the current mix.

There are calls for nuclear units to be rewarded for the stability they provide, and for their ability to deliver electricity on demand, in a way that variable renewable sources do not. However, the simplest way to find new sources of revenue is usually to diversify your product line. Perhaps nuclear plants need to be more than just giant electricity factories?

At a basic level nuclear reactors produce heat and this is usually used to boil water, spin a turbine and generate electricity. For people to see this giant kettle as part of the energy industry’s diverse, decentralised future the industry will have to invent some ways to make more use of that heat and electricity. If a large nuclear reactor is by its nature centralised, it could at least be diverse in its products. As well as electricity, nuclear plants must begin supplying other energy goods of use to the transition as part of an innovation agenda for the next 20 years of the current nuclear fleet.

This may be anathema to nuclear engineers, who are among the most risk-averse and precise of all professionals, because innovating nuclear power’s product line will result in some inefficient solutions that make them uncomfortable. It’s important to keep in mind, then, that the future electricity system is going to be anything but systematic and anything but efficient. It will see a dynamic ebb and flow of varying forms of demand and production, storage and usage, which will all have to balance somehow.

District heating from nuclear plants has been successful in several countries, and is on the agenda for the future, particularly thanks to excellent work by advocates like Rauli Partanen in Finland. Would it be impossible to find a partner in need of warm water, for, say, farming or aquaculture, and entice them to set up a joint venture near to an existing nuclear power plant?

I was privileged to host a workshop for young professionals recently in which an exercise produced ideas such as supporting an onsite vertical farm with warmth and electric light, that would have otherwise been curtailed for load following. As part of the NICE Future initiative, the concept of nuclear being integrated with renewables was the subject of the workshop, because that is the vision which leading members Canada, the USA and Japan think is needed to confirm nuclear power’s seat at the climate change table long term. As well as developing the idea of energy parks featuring multiple sources, delegates took it further. They want to build new relationships and coalitions between the nuclear energy community and others with the same values who are pursuing ecomodern ideas.

In early April, EDF set up a hydrogen production subsidiary called Hynamics. It is founded on a stake EDF took in McPhy, a hydrogen specialist that promises modular electrolysis systems that can scale up to accept inputs of 100MWe or more. The potential is there for EDF to quickly become one of the world’s largest hydrogen producers, simply by reducing its habitual load following and funnelling that unwanted electricity into hydrogen instead. Not only would that be making use of marginal cost electricity, it could, by locating a hydrogen plant alongside a nuclear facility, show the world that today’s nuclear power has a new and innovative role to play in the energy transition. As part of the overall system it would smooth the cooperation between renewables and nuclear, go some way to introducing seasonal storage of energy, and support another route to decarbonise transport and heating.

Despite hydrogen’s disadvantages, I’d argue we need to realise its potential because we don’t yet have enough good ways to decarbonise heat. Electricity cannot do everything.

Had such co-generation solutions been brought forward a few years ago, might we have been able to save the perfectly good units lost to failing markets in the US? Might attitudes in several European and Asian countries be a little more positive if nuclear had shown it was moving with the times? Or might more voices have spoken up in favour of our plants? Actually reader, please don’t answer. My purpose is not to convince you; I only want to note that diversification is emerging as a foundation of the future energy system.

In this enterprise, it will be no good waiting for the perfect business case before getting started. Multi-product nuclear producers of the future have to get started now, using currently available technology so they have time to refine their ideas and are ready to roll out in a big way when the business case presents itself. That means this is a game for nuclear owners with a mandate to think and invest for the future. There are not enough of those, but there are some. Which of them is going to make the investments that will propel today’s reactors into the future system?