The future of the nuclear sector – is innovation the answer? 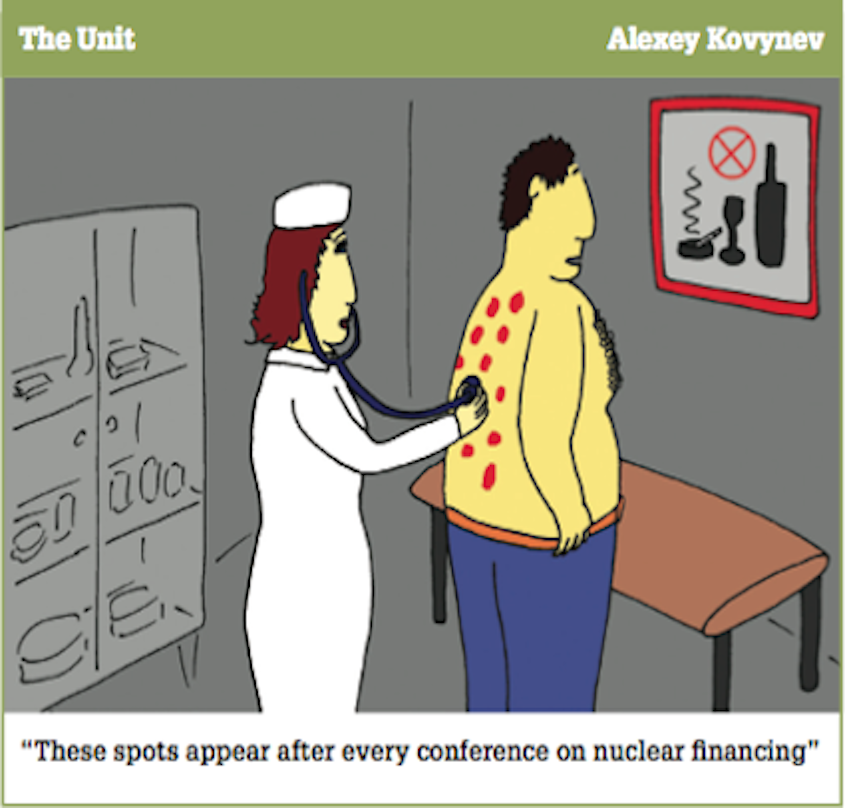 The recent buzz around small reactors and Generation IV designs has increased calls for a technology shift away from traditional large light-water reactors. But is it technological evolution or structural change that the industry needs?

Much recent media coverage of the nuclear industry claims that it is now in a state of deep crisis. This has been prompted by the news that the two vendors leading the charge towards Generation III reactors, Areva with the EPR and Toshiba- Westinghouse with the AP1000, have both effectively gone bankrupt. There also remain significant issues to be resolved at each of their construction sites in the USA, Europe and China.

Other recent news is not so good either. Japan has only opened three of its 42 shuttered nuclear reactors, six years after Fukushima, with rotten public acceptance the overwhelming reason rather than technical failings.

India is clearly not set to follow China into a rapid nuclear growth phase. Its targets announced for nuclear generation in the early 2030s look even more unachievable than before, and the Indian industry is becoming inward-looking once again. Its tie-up with Russia on reactors appears sound, but proposed cooperation with Areva, Westinghouse and GE now looks dead in the water after their recent financial disasters.

Vietnam, the poster child of prospective nuclear countries, has abandoned its planned programme.

Meanwhile, operating reactors in the USA face continued economic pressures. Estimates from the Nuclear Energy Institute (NEI) that 15-20 reactors are “at risk” is probably well short of the real number. For example, First Energy recently announced that it would close its four units unless they were offered some financial relief, including some that were not on most people’s “vulnerable” lists.

In reply, the industry is spinning that the number of reactors under construction around the world is higher than it has been
for many years and is noting (quietly, as it fears upsetting people) that the renewables sector is beginning to encounter significant negative issues in its quest to achieve environmental salvation in power generation. This has been picked up recently in the media, but it’s amazing that it has taken highly qualified journalists so long to get there, when many commentators, including myself, were pointing out these issues as long as five years ago (see February 2012, ’Renewable energy – what are the problems?’ and November 2012, ‘Renewables – is the honeymoon over’).

A big question is where the industry goes next, in terms of both structure and technology. I continue to insist that without a paradigm shift away from fear, these questions are irrelevant. The industry will surely die before any deep structural transformation and move to better reactor designs has taken place. Some rather radical suggestions were made last month, such as rechristening nuclear power as “fission power” and that the industry needs to globalise on the lines of the aircraft manufacturing sector (moving from the era of 15 manufacturers producing turboprops to a small number producing jets). In other words, to reach maturity after living in a 1950s/60s timewarp for decades. My suggested approach, namely an international programme on the lines of the Generation IV International Forum, to come up with maybe three simplified designs that can be standardised internationally, is certainly somewhat fanciful. The key requirement in any consolidation is for countries to stop being nationalistic in nuclear and let the international market do its job.

What has been most interesting in recent weeks is that the debate on these matters is not taking place within the nuclear industry but is being led by nuclear-friendly environmentalists in the USA. As has been pointed out in recent months, there is a nuclear ‘swamp’ in the sector, which seems bereft of new ideas, avoids debate and is essentially defeatist. It makes weak accommodations with renewable energy in fantasy energy scenarios, while continuing to pump out news items and information that serve to chronicle the industry’s likely demise. Delegates leave nuclear conferences buoyed by speeches from industry leaders, but return to depression as the real world hits home once again. And the bosses often get fired.

What is interesting is that there is now a split in the ‘ecomodernist’ camp – those who are still staunch environmentalists, but have realised that since the environmental mess was created by science and technology, utilising more sensible versions of the same is the obvious way to get out of it. In common with me, and others, they realised some time ago that renewables (as they stand today) cannot really cut it and cannot provide more than a limited share of power generation in an increasingly urbanised and industrialised world.

I have previously expressed scepticism about whether these new bedfellows should be taken seriously or not. This was based largely on their insistence that the current nuclear technology is not fit for purpose, so a major shift to a new generation of advanced reactors is required. My conclusion was that today’s technology is fine when done properly, but changes in power markets could eventually open up opportunities for new reactor designs (of which there is never a shortage). But getting from A to B is very problematical.

The split in the ecomodernist camp is now very much along these lines. Michael Shellenberger, whose TED video talk has achieved over a million hits, has recently produced some well-argued articles that assert that evolutionary light water reactors are still fine, provided that the industry consolidates and achieves the standardisation and scale that is necessary for sounder economics. He advocates a single western-world reactor supplier to compete with the Koreans, Chinese and Russians, something like the consolidation that created the Airbus Industrie company in aviation. On the other side are those, notably Ted Nordhaus and Jessica Lovering, who claim that power markets have changed fundamentally, with slower growth and the end of the large utility companies. This suggests that a technology shift away from today’s large LWRs is vital. The question is, “Shift to what?”. Those who claim that the industry’s salvation rests in fundamentally new designs have no far been wholly unpersuasive.

Good on paper, and in reality?

There are plenty of “paper reactors” out there. Small modular reactors (SMRs) are in much the same boat as thorium reactors and even Generation IV units. Admittedly the large reactors are expensive, but if their costs can be reduced from the current crazy levels (with help from the Chinese and Koreans) it should still be possible If the economic question (costs versus revenues) is answered correctly, the finance will come from the entrepreneurial banking sector. As I’ve argued for years, finance is an output, not an input, into a nuclear project.

The UK government has realised that the country is out of the large reactor construction game and is using a great deal of public money trying to find a way back. SMRs may have niche applications, but their economics are unproven and to succeed, they need the same regulatory revamp that the bigger units need. In other words, the shift from the “paradigm of fear”. Without that, they will get strangled by the regulator, just as the large LWRs have been. And nobody is going to want an SMR located down the road from them if they are still afraid of all things nuclear.

The Chinese and Koreans are far more likely to develop operable SMRs than the West. If you are building large reactors, profits are made to invest in the next generation. This is the way the world of business works, something the nuclear sector seemingly knows nothing about. In the West, SMRs and Generation IV all depend on public subsidies, which have a rotten record of bringing new technologies forward. Public funding for a specified objective such as ‘advanced reactors’ is almost certain to be a failure.

The Chinese High Temperature Gas Cooled Reactor (HTGR) – which apparently will come online in 2018 – is certainly not a paper reactor. But the Chinese do not see much scope for SMRs. Even though there are several 100MW units well ahead in development compared with the West, the Chinese only foresee using them for “niche applications”. Ditto the Koreans. The SMART SMR has been ready to go for a few years now, but utility KHNP is not interested in building it. It believes in the large-scale APR1400, as constructed both in Korea and the UAE.

The switch to Generation III plants (with the exception of the ABWR in Japan) has so far been a disaster for the industry. Europe and the USA might have suffered construction delays on new units with any reactor design (even a Generation II), owing to the long hiatus in building. But new designs interrupt the process of learning-by-doing and continuous improvement. Standardisation is especially important to nuclear because so many people and institutions – the designer, builder and many subcontractors plus the regulator – have to work in synchrony to do anything. Any single actor can slow the process down.

Standard designs, multiple reactors on one site and a vertically integrated builder have been the key to reasonable construction costs in France, China (up to the recent flirtation with Generation III) and Korea. Areva, Toshiba-Westinghouse and others claimed their new designs would be safer and thus, at least eventually, cheaper, but there were always strong reasons to doubt such claims.

What is proven to make nuclear plants safer is experience, not new designs. Human factors swamp design. And how do you make a technology that almost never harms anybody any safer than it already is? The claimed safety enhancements of Generation III plants are purely theoretical, for example in terms of estimated core damage frequency, whereas real safety improvements can most easily and cheaply be made by enhancing the human element.

The argument is about whether the industry has had too much or too little innovation. But if the industry’s structure is stuck in the 1950s and 1960s, why would one expect technology to move quickly forward? Clearly the major cause of the excessive recent construction costs has been delays. They cripple a project, bringing forward more component and labour costs, extra interest payments on the capital committed and, crucially, a delay in receiving revenue from selling the power. So maybe it doesn’t matter so much what you build, so long as it can be delivered on time.

Those who advocate the necessity of technology shift for nuclear should say what they would do in the UK. The government has created the space for large reactors in the policy mix, so what use are the conferences discussing innovative designs? And why should the UK be so special? Other countries will soon have ageing reactors that would best be replaced by new units. The way the UK has gone about the its new build programme (four separate vendors for about 15 units) is crazy in an economic sense, but the case for large grid-base power systems has not disappeared.