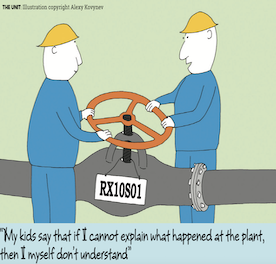 Jeremy Gordon says China’s slow response to questions about fuel leakage at Taishan raise concerns over its commitment to open information – and that should be a concern for the rest of the industry.

A DETAILED Q&A BY OFFICIALS at China’s National Nuclear Safety Authority (NNSA) clarified everything. It superseded bare- bones announcement by Framatome, issued more than 36 hours previously, which itself confirmed a little of what had been discussed unofficially on social media. Everyone had been looking to find a plausible explanation for a story published by CNN more than two days previously, which raised concerns with claims of an increase of radiation around Taishan and a supposed ‘leak’ that had been going on for at least a week.

In fact, the issue was leaky fuel elements, whose signature is a build-up of noble gases from the fission process. Although fuel suppliers have worked hard over the years to avoid such fuel damage it is still quite normal, with well-established tolerances and operational methods to manage the issue. NNSA said that five of Taishan 1’s 60,000 fuel elements were damaged and it had raised the permitted level of noble gases allowed in the primary loop. Importantly, NNSA clarified that this was happening inside the plant, and certainly not outside, where radiation levels remained normal.

Taishan 1 was the first EPR unit to enter operation in 2018 and remains fairly new, having been refuelled only once. It was natural for the operating consortium — CGN and Framatome — to collaborate with Framatome’s offices in France to diagnose, analyse and manage the issue. However, that required Framatome to transfer information of US origin to CGN, which required approval from the US state department. Such a transfer must be justified, with one permitted reason being cases of ‘imminent radiological release’. It was sight of that wording that had triggered the CNN item, in combination with a ‘build-up of gases’ and NNSA changing the rules on how much radioactivity is allowed.

The conditions that would turn an operational issue into an international panic had been set in place across three countries over many years. They sat waiting until 14 June 2021 to be triggered.

We can criticise CNN’s reporting and we can grumble that it did not put enough weight on the comments of experts
it contacted, but let’s be honest: from a lay person’s point of view none of the terminology above sounds good. Once it was in the public domain, the whole world demanded to know more. But there was no more.

Even those who could navigate to the CGN website and read Mandarin found no recognition of anything unusual going on. There was a media statement issued the day before the story broke saying that, after enquiries from the media (presumably CNN) and various institutions, CGN had decided to clarify the status of the plant: everything was fine. Given the apparent seriousness of CNN’s report this was simply not credible. The information vacuum remained and rumours continued to circulate and grow, all the time harming the reputation of the EPR, harming the reputation of Chinese nuclear and harming the reputation of nuclear in general.

They say an accident anywhere is an accident everywhere, therefore they must be prevented at all costs. The same
is virtually true of the rumour of an accident. The idea that EPR might be a faulty design was quickly used by campaigners and critics to hurt France’s chances of further new build next year. And the idea that CGN might not be a competent or truthful partner was used to throw shade on the UK’s plans to build at Sizewell C, where CGN remains a 20% partner. I think the industry can count itself lucky that these unfounded smears didn’t stick in the end.

Some observers pointed to China’s tight control of digital information within its borders, asking why it would respond to rumours in foreign media. But if the average Chinese citizen does not have access to cnn.com, that does not apply to everybody in China. Even if CNN was universally seen as an untrustworthy American source, biased against China, it is safe to say reports of an imminent nuclear accident would be noticed. Authorities in China’s Special Administrative Regions — Macau and Hong Kong — are still publicly answering questions from residents about Taishan and explaining their plans to respond to nuclear accidents. It is hard to tell from the outside what the discourse may have been within mainland China, but it is certain that CGN and NNSA’s phones were ringing for hours.

I was briefly in a situation like CGN’s when I served as press officer for the World Nuclear Association. Every day
I answered calls from journalists, usually helping them to understand more about nuclear and get them closer to an original source for their story. One afternoon I answered the phone to a reporter on an in-house publication sponsored by Greenpeace. “There has been a nuclear explosion in France,” they said, “What do you know?” That got my attention! I quickly confirmed that it was not a ‘nuclear explosion’, but an eruption of steam at a contaminated metal recycling facility. Nevertheless, this ‘explosion at a nuclear facility’ had killed a worker and the situation needed to be urgently clarified, which I did by relaying and contextualising official information as it became available.

Obviously, media culture in Guangdong province is not the same as it is in England, but I find it very alarming
that when CGN’s phones were ringing with rumours of a radiation leak it did not respond substantively. Framatome obviously felt the same way, making its own statement in an attempt to fill the gap. For substantial information from NNSA the world had to wait 44 hours.

This slow official response contrasts very sharply with the best practice operators and regulators are encouraged to aim for. After prioritising any duty to inform local officials and regulators, most nuclear operators practice making their first communication with the public within an hour of the need arising.

It is worth noting that the story broke on the last day of China’s Dragon Boat Festival. On a national holiday like that you would not expect full staffing levels or decisionmakers to be immediately available. But this is nuclear power we are talking about. Nuclear operators don’t really get to have a day off from their responsibilities. If something related to safety occurred, we would expect resources to be available. That makes it is hard not to question whether China is really committed to excellence when it comes to maintaining its social licence to operate nuclear.

One thing that does shine through in this is the value of independent nuclear commentators’ use of social media, especially Twitter. That platform is where announcements are made, news is discussed and journalists make sense of developments. With experts on hand to explain what fuel damage is and how it fits the CNN story, albeit unofficially, a lot of pressure was taken out of the media interest. It is good to see that the unofficial effort by volunteers called this right and took the heat out of it.

As I wrote in a previous issue of NEI, research from Xiamen University indicates Chinese authorities may be relying on wall-to-wall good news about the country’s nuclear programme to secure the support of public and officials, which seems to be working well enough in the short term. But leaving no space for negatives also means there is no space for realism in the discussion with the people that would be affected by an incident. The risk is that when something does go wrong, which is inevitable, either in a large or a small way, all the trust built on false premises will collapse, perhaps permanently. We saw this happen in Japan when its ‘nuclear safety myth’ collapsed in the face of the Fukushima accident.

It bears repeating that public protests have led to the cancellation of nuclear projects in China in the past. Its system of governance and control of information do not make it immune to fear of radiation.

Just as safety lapses and near-miss incidents are valuable signals to operators that they need to improve, so should be events like this. Having seen this minor incident play out we cannot help but wonder how Chinese authorities would communicate and what the knock-on effects for the rest of the nuclear sector would be in case of a genuine public emergency.