Shaping the future for operators 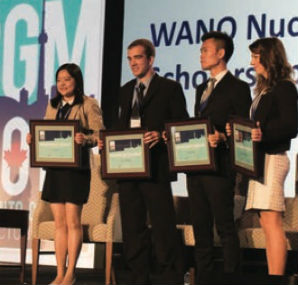 In October, over 500 delegates from members of the World Association of Nuclear Operators met in Toronto for the organisation's 13th Biennial General Meeting. From chief executives to chief nuclear officers, they gathered to consider how WANO should shape the future of the nuclear industry. Ken Ellis looks back at a successful event.

At the 2011 BGM in China WANO initiated 12 projects in response to the Fukushima Daiichi disaster. These projects were designed to help prevent or mitigate a similar occurrence in the future, and to close the gaps in WANO performance. This BGM gave me an opportunity to update our members on the progress of these projects, and to explain the direction for WANO over the next few years.

The post-Fukushima projects included the introduction of WANO Assessment; a plant receiving a peer review will now be given a rating on a scale from one to five capturing the overall nuclear safety risk. This assessment rating provides CEOs with independent feedback, and was included in peer reviews from September 2014.

We worked to increase the frequency with which we carry out peer reviews. These reviews help members compare themselves against standards of excellence through an in-depth review of their operations by an independent team from outside their organisation. We now carry out a peer review once every four years, with a follow-up at the two-year point. We are assessing the equivalency of Institute of Nuclear Power Operations (INPO) and Japan Nuclear Safety Institute (JANSI) reviews to WANO peer reviews to ensure these are carried out to equivalent processes and performance so that follow up reviews by these organisations can be considered as equivalent. We have introduced corporate peer reviews and are starting to implement design-informed peer reviews to look at the organisation as a whole, taking the management and design of a plant into account when reviewing our members.

We also assess ourselves to make sure we remain effective and efficient; an internal assessment of WANO happens every four years, with corrective actions suggested in the same way that they would be at a member utility.

We have also looked at how our members handle emergencies. The emergency preparedness project is a set of actions that allow a plant and parent nuclear operating organisation to respond safely and efficiently to an emergency. Our emergency support plan means our members can request knowledge and technical expertise from other WANO members, as well as in the future, from industry organisations such as the International Atomic Energy Agency and World Nuclear Association. When combined with our early event notifications, on-site fuel storage and severe accident management, our members are now more prepared than ever to cope with an emergency.

Finally, the visibility and transparency project has increased awareness of WANO, sharing information within our membership while retaining confidentiality.

We drew a line under the post-Fukushima projects at this year's BGM, and we have developed a fresh approach to the new challenges ahead. 'Compass' is our long-term plan for the period 2015-2019. It paves the way for us to become more effective in key areas such as new build and end-of-life plants as well as life-extensions and decommissioning.

The four focus areas of Compass are:

The second focus area of Compass concentrates on the change in the nuclear workforce population and countries starting a nuclear programme. We need to attract young talent while retaining knowledge in the nuclear industry, which can pose a challenge to WANO members.

At this BGM, we launched a new initiative to help our members in this transition: WANO Young Generation. Through this initiative we will work with existing industry young generation movements to help create future leaders for safe and reliable operations of nuclear power plants, by networking, professional development, and knowledge transfer.

We were pleased to present four WANO scholarships at this year's BGM. Essays on the importance of making safety their top priority were submitted by almost 100 nuclear power generation students aged 25 and under. They were judged by WANO's executive leadership team, and we awarded four students with £2500 towards their studies.

It wasn't just the young generation who were recognised - eight individuals were awarded the WANO Nuclear Excellence Award, for extraordinary contributions to excellence in the operation of nuclear power plants, to the infrastructure that supports the nuclear power enterprise, or through WANO.

As the nuclear industry changes, WANO will continue to adapt and evolve, and help to shape its future. The next BGM will be held in 2017 in Gyeongju, South Korea.