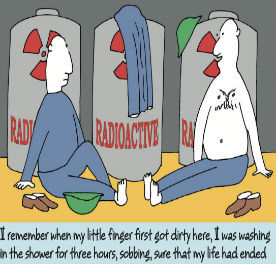 IT IS DIFFICULT TO IMAGINE anything more boring than a concrete block sitting in a warehouse. At more than two metres on each side, this one was huge and looked very heavy too. Those extremes made it impossible to imagine it moving or doing anything of note. I walked right up to it and took a photo near the smooth, high quality concrete, making sure to get the radioactivity warning sign in frame. That block contained solid bits and pieces of the dismantled core of the Windscale Advanced Gas-Cooled Reactor — the prototype that came before the UK’s AGR fleet — and touching it was my first direct experience with radioactive waste.

Human beings are sometimes referred to as ‘the storytelling animal’, in part because we each hold our own explanation of the world. We prefer it to be consistent and to make sense, at least to ourselves. When we experience something that does not fit with our pre-formed ideas, we become inquisitive: a surprising result must have some explanation. We search for information to fill our new knowledge gap, either by patching up our narrative or replacing it with a better one.

For me that kind of mental reconciliation was one process in play as I revised my expectations of nuclear to something based on reality instead of the thick cloud of mythology we have all been brought up in. In other words, that is how I changed my mind. As a new journalist starting to cover the industry without any previous experience of nuclear, this simple first-hand experience enabled me to think about radioactive waste very rationally.

Reflecting on my own example recently, I decided to ask other people to share their stories. How had they changed their minds about nuclear? I was rewarded with a rundown of the most effective kinds of conversation taking place right now.

Some people claimed to have an innately questioning attitude that had never been captured by the fear, uncertainty and doubt that usually surrounds nuclear, and some others said they were old enough to remember the previous imagery of a positive and abundant future the technology promised. But many cited the same kind of direct experience as I had, when apprenticeships, first jobs and plant tours brought new information that just didn’t fit with cultural expectations. There is certainly no substitute for first-hand experience, especially given that many of these people retained their insight into the true nature of nuclear even though they went on to work elsewhere. I think there is no better long-term investment a nuclear operator can make than a visitors centre and the resources to keep it busy every day.

Another kind of direct experience proved to be important: accidents, incidents and shutdowns. One person had grown up near the Zion plant in Illinois and held a negative attitude towards it, so they were glad when it shut down. But then they found themselves living in a town with an unbalanced budget, in a home in which it had always been difficult to afford electricity. This brought home to them how important a facility like this is and the many ways its operation provides much that is needed people’s lives. This is not to say there are not other ways to achieve the same ends, but nuclear delivers for the grid and for communities.

While safety related incidents will never be public relations successes, the sudden and dramatic appearance of nuclear energy on the news does spur some people to go looking for answers to questions that TV fails to provide. A classic example was a person in Germany who had never thought about nuclear until the Fukushima accident. Researching radiation to ascertain the safety of family members visiting Japan, they found the supposed disaster resulted in radiation levels less than background levels in their hometown. That person quickly became an energetic advocate for using a lot more nuclear, not less.

Nuclear is usually a ‘back of mind’ issue — until it is not. When people’s interest is aroused they benefit enormously from accessible information and experts to help them reach a real understanding that is more complete and satisfying than the mythology it replaces.

Credibility is key to the authority of commentators from the industry, of which there are an increasing number comfortable to discuss the sector on social media. I’m glad to see a growing number of responsible named accounts of nuclear professionals who are open about their work and motivations on social media and provide a warm and helpful environment that can change people’s minds from anti-nuclear to pro. Nuclear is portrayed by its opponents as a monolithic and faceless industry of huge companies, therefore any representation of humanity by the people involved can challenge that very effectively.

On top of these users come really effective and powerful third party advocates, such as Michael Shellenberger. He campaigns hard with direct language, robust research and physical events to set his own agenda and was cited by many people as instrumental in changing their minds.

Whoever is speaking publicly about nuclear, whether they are from the industry or an independent advocate, must rely heavily on the decades of trustworthy facts and figures produced by the sector. The public knowledge base provided by organisations like the International Atomic Energy Agency, and OECD Nuclear Energy Agency, the US Energy Information Administration and well as the World Nuclear Association, where I used to work, creates a platform of credibility for independent voices to make a case for nuclear. The numbers and charts rarely change minds on their own, but they are ready made to fill knowledge gaps and become incredibly powerful when put into context by relatable human beings.

That kind of advocacy brings to light some parts of the nuclear offer that are not well known outside the industry — reprocessing, used fuel casks, small reactors, submarines, icebreakers, space probes, radiotherapy and even thorium— which flip the script on the assumption that any difficulty of nuclear energy is automatically an unsolvable riddle.

Several people told me their view of nuclear had been reversed by data on the fatality rates of different energy sources, especially when presented independently by a respected arbiter like Our World In Data. Another favourite was electricityMap, which simply displays the current energy mix in countries around the world. Any impartial observer would conclude in five minutes that levels of nuclear and hydropower tend to be the deciding factor in each nation’s carbon intensity.

The ability to double check what anti-nuclear advocates are putting forward is another useful feature of fact-heavy communication on nuclear and on energy in general. After socialising with some Greenpeace members, one person went home and was able to verify that what they had been telling him about the power and pollution situation in Poland was nonsense. I didn’t hear what happened the next time they met.

Furthermore, public data enables a certain kind of person to run the numbers on climate change themselves. Their home-made models usually come to the same conclusion as the ones that support reports of the Intergovernmental Panel Climate Change: that decarbonising without nuclear is virtually impossible, and insisting it is optional is a frightening waste of the short time we have available. By investigating many have actually converted themselves to a pro-nuclear stance.

One person told me they had been anti-nuclear, but simply had not been able to find evidence to back up their position: “The damn nuclear advocates kept kicking my ass. Over and over.” Another commented that scientists including James Hansen and James Lovelock highlight that fossil fuel is changing the climate and killing millions of people right now, while “it’s all talk against nuclear.”

“Now I spend my free time advocating nuclear power because there is an actual death rate attached to my former idiocy on the topic,” they told me. “It’s the least I can do for the people who died because I embraced comforting stupidity over facts, science and data.”