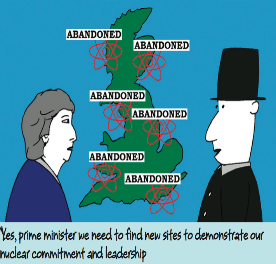 Increased public and political interest in the use of nuclear power as a response to climate is undeniable. But can this translate into a new wave of construction? Jeremy Gordon examines the issue.

As a rebirth of nuclear power, the last ten years have been quite true to form. The nuclear renaissance promised big, but delivered only about one tenth of what it was supposed to. As it draws to a close we can celebrate the success of China and Russia who stuck to the script and rolled out new standardised designs supported by domestic supply chains and thousands of young workers. The Western portion of the renaissance has been stunted at best, and it is an ironic twist that the first AP1000s and EPRs are operating in China.

As the first of the pioneer countries to face the need for replacement build, the UK set about it with pragmatism. “We have to talk about nuclear power again,” said then prime minister Tony Blair in 2006, leading a national conversation to a positive conclusion. Gas from the North Sea was running out and the nuclear plants that provided 20% of electricity would be gone early in the 2020s. Carbon budgets were set. Great Britain decided to make itself the best place in the world to do nuclear business. But the loss of NuGen’s Moorside and January’s announcement by Hitachi that it would mothball Horizon Nuclear Power and its Wylfa Newydd plant marked the end of that road.

We can hardly blame Hitachi for being nervous, having seen Toshiba taken down by Westinghouse’s nuclear build projects, and Areva’s story. Hitachi’s former nuclear partner GE seems to have all but left new build. But what are we to conclude when a huge multinational corporation, with a site, a guaranteed power price, one-third government equity, and 100% government loans is not prepared to build a power plant of its own proven design? And what about the fact that China is the only one ready to step in?

Over the last decade, even as the need for nuclear has become increasingly accepted and the industry has grown overall, we have seen private utilities withdraw from investment, then from joint ventures. The vendors were told they had to share the risk if they wanted to prove their designs. Soon, the vendors had to sponsor entire projects, and later governments were asked to join. The progression was slow, but in retrospect not surprising at all. For governments the buck stops here. The reality is that, like it or not, today’s large nuclear plant designs are not going to be built except with the full backing of governments – the only entities with the mandate to execute far-sighted investments like nuclear power, which are far beyond the business cycles of the market.

It is disheartening to see that so many governments that have benefitted hugely from running nuclear plants over many decades have apparently forgotten that they even exist. Of course renewable sources are more fashionable now, but the fact that nuclear power can be taken for granted is testament to its reliability, its energy security and its resource efficiency. The sector would not be so easily forgotten if it had been in the news more often, if its fuel supply had been an issue from time to time, or even if the plants were more visible from the road. Perhaps nuclear plants, once they are up and running, make the job of powering a country somewhat too easy.

But governments know the fundamental contribution that always-on clean power plants make. They offer all three things that matter in the energy system: affordability, environmental acceptability and security.

In France nuclear has been a political football since President Francois Hollande made a deal to get Green Party support for his successful campaign. But how likely is current President Emmanuel Macron to close 14 good reactors and put electricity prices up, while the gilets jaunes protests, sparked by petrol prices, continue week after week? He has already shifted the date for nuclear to reach 50% share back by ten years.

In South Korea national newspapers run editorials embarrassing President Moon Jae-in over his nonsensical plans to close the domestic nuclear industry and replace it with imported gas. This is thinly veiled as a pro-renewables policy, but even Moon’s advisors have admitted the result might be dependence on a pipeline bringing gas from Russia through North Korea.

In Belgium also the government’s half-baked idea to switch off nuclear is to switch on gas, which has made a lot of people think twice about it. Even in Germany Peter Altmaier said he would hate to rely on imported ‘cheap’ nuclear power from abroad, while simultaneously setting the weak goal of getting off coal only by 2038.

The fact is that although nuclear power is not very popular, it works rather well and policymakers of the world are quite well aware of this fact. But why make a fuss while the plants still have ten years to run? Leave it for the next president to deal with.

We’re entering a closing situation, and not just for the operational lives of Generation-II nuclear power plants. Consider the growing appreciation of the environmental hell we are falling into. We’ve known about global warming for decades, learning that its effects are varied enough for the term climate change to be more descriptive. Recently we realised that CO2 is acidifying seawater and will do for the coral reefs and the tiny creatures at the base of the food chain. Oh and by the way insect populations are collapsing and we have only just noticed.

This is why, after last IPCC report on limiting warming to 1.5°C, people latched on to the idea that ‘we have 12 years to sort this out’. We are getting close to the edge and our environmental vertigo is a powerful motivator to stop, and go in the opposite direction.

We see people furious about plastic waste. We see the mainstreaming of vegetarianism and veganism. We see Greta Thunberg and the Extinction Rebellion declare the time for politeness is over, and they are right. It may soon be time for the international community to stop being so polite around German nuke-o-phobia. Germany’s attempt at energy utopia, Energiewende, has featured some big embarrassments. Despite spending billions it has hardly reduced energy related carbon dioxide emissions in recent years, while Germany has bulldozed villages and forests in a commitment to use coal until 2038. But before Germany’s renewable-only narrative can be thrown out, the other countries need an alternative.

Nuclear is the only thing that provides an alternative for all or part of the job, but it is now perfectly clear that serious nuclear build will not happen unless governments decide they want it and roll up their sleeves to make it so. In fact, if France doesn’t make its mind up soon, its capacity to build nuclear in future will be seriously at risk. And if France lost that ability, then so would Europe, and the Western capability would be left hanging by a thread.

This apocalyptic scenario can and should be averted both by national commitments and by winning the international debate on the trajectory of global climate change efforts. There is leadership from some countries, notably the USA, Canada and Japan, who last year set up a research track on nuclear power as part of the Clean Energy Ministerial series of meetings. The meetings had barely breathed the word ‘nuclear’ since being inaugurated by President Barack Obama’s Secretary of Energy Stephen Chu in 2010, but that changed in May last year with the launch of the Nuclear Innovation Clean Energy (NICE) Future initiative.

The NICE Future programme has been developing without much fanfare since then, while nations such as Argentina, Poland, Romania, Russia, the UAE and the UK have joined. More will surely join. The initiative should reveal itself more fully this May when the CEM meeting is held in Vancouver, Canada. Alongside it the International Energy Agency is to release a report on “nuclear power in clean energy transitions,” because, as agency head Fatih Birol said, “our aim is to bring nuclear power back to the clean energy debate.” Presumably it will point out what is already known to policy teams: clean energy roll-out at the pace achieved by Sweden, France and the UAE is what we need across the world – and we need it right now.

Both of these initiatives are the result of leading countries starting to finally use their influence in favour of nuclear as a valid response to climate change – and winning arguments against people saying the opposite. Pro-nuclear countries have equal rights to set the agenda and they can’t be ignored. The time for keeping quiet while Germany exports its Energiewende is over.

The governments of Russia, China and India will surely keep pushing nuclear at home and abroad in their own ways. There are now some grounds to hope that the Western governments are getting ready to put their weight towards a Nuclear Renaissance 2.0, in which the hard- learned lessons of the last decade are put into practice.