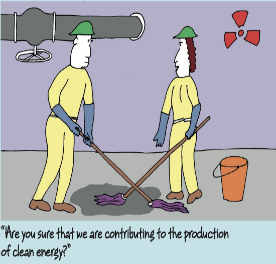 Is the nuclear industry resilient? The true test will be seeing whether they build better business plans, not simply more resilient power plants, says Jeremy Gordon.

OUR INDUSTRY TAKES A LOT of pride in its resilience, the ability of its power plants and operations teams to keep generating through adverse conditions that might take down lesser energy sources. The extreme cold of a polar vortex and the unique social disruption of the current coronavirus pandemic both make that case well. Nuclear power plants and their management are able to absorb and adapt to these stresses through their physical robustness and their management’s extensive planning. And if they do shut down, nuclear plants are sometimes among the first to restart once sufficient load is available. In terms of the energy system nuclear is resilient indeed and it feels right that governments and energy market authorities should be placing more value and monetary reward on that contribution.

Concepts of resilience have their root in Crawford Stanley Holling’s 1973 analysis of ecosystems, where the word was first used to describe an ecosystem’s ability to return to a steady state after a shock, and this is the meaning usually used in engineering. A broader definition of resilience is the ability of an entity to reorganise while enduring a disturbance and to rebalance in a form that is still recognisable. This allows for a world of interrelating ecosystems which find balance together.

So, resilience in a broad sense is not only to maintain your current place during extreme conditions, but to continue to maintain it under ‘new normal’ conditions as yet unimagined. Fundamental to this is a recognition that we will always be ignorant about the future and that we have to retain some scope to accommodate the unexpected. For the nuclear industry, resilience beyond its engineering systems means being flexible enough to make a whole new business plan when the previous one fails for an unexpected reason.

A good example of the difference is the Fukushima accident. Most Japanese nuclear power plants affected by the earthquake and tsunami were physically resilient, and the Onagawa plant was even used as a refuge by local people. However, one plant in particular was not resilient. Its planners and managers had never really asked the question, “And what would happen if the water were to come over the tsunami wall?” They did not know that the chain of events that would follow involved the plant failing in spectacular fashion and sending shockwaves that would break the entire Japanese nuclear sector.

In the months that followed, other parts of the Japanese energy system were able to adapt. Electricity use overall began to trend downwards and the gap left by nuclear was mainly filled by gas. Over some years Japan became the world’s largest importer of LNG, using newly built terminals, and recommitted to coal and made plans for new units. These energy sources were able to take advantage.

The nuclear industry in Japan, however, remains stuck in limbo. Political support still exists at the highest level, but trust is now lacking among the public and among the local elected officials who must approve restarts. This extra-legal requirement was always an unusual artefact of Japanese nuclear governance and it went from a courtesy to a stumbling block overnight. With the same technologies, the same plants, the same sites, and the same people as before, the Japanese nuclear sector has not been able to deliver an effective adaptive response to its new normal — even where fossil divisions of the same companies have responded. Both the government and industry seem to be hoping the situation will somehow revert to how it was a decade ago.

A deeper example was the collective decision of utilities during the 1990s that stable market conditions would probably continue and the only thing they wanted from nuclear vendors was larger and safer standardised light water reactors for baseload operation. Utilities codified this through the European Utility Requirements (EUR) organisation, which decided from the start that sticking with LWRs would limit technological risks in terms of licensing and obsolescence.

But the risk of over-specialisation was enormous. The result of convergence on large LWRs has been a range of power plant designs with no discernible differences in performance. They are all large, they are all LWRs, they are all safe, they all run 95% of the time, they all last 60 years, they all run on the same kind of fuel. And they all have massive overnight costs and they are different enough that they have separate undernourished supply chains. Which one you choose depends more on engineering preferences and the level of support from the vendor’s country than anything else.

On the vendors’ side, agreeing that bulk electricity supply through a single technology will be the only commercial function of nuclear fission was an act of almost suicidal specialisation. Considering the long lead times of nuclear technology, that decision made adaptation and innovation much more difficult, if not impossible. Despite the Western industry’s 20-year struggle to sell and then deliver affordable standardised LWRs, they are still specified under EUR requirements, which also give no guidance on small or advanced reactors.

Part of resilience is an organisation’s ability to make a new plan when the one it has fails. Yet in the US and Europe we have seen large light water reactors close, because markets could not provide enough income. Their owners complained and campaigned for better markets but did not manage to create alternative income streams from new sales mechanisms, ownership structures or other energy services, even though the whole world is crying out for clean energy. Power plants have been closed, or been stuck on the wrong side of national politics, because their owners did not develop any allies that would speak up for them.

Key resilience qualities such as multi-functionality, redundancy, reversibility and incremental learning are all present in nuclear technology, but not in nuclear business practices. It seems there was no defence in depth for anyone’s business plan.

The nuclear industry has got used to the world changing faster than it can react. I cannot recall a time that another energy source ran into trouble and nuclear was able to benefit from it, or any unexpected shock put nuclear ahead of its competitors for long enough for a contract to be signed.

Now there is a sense that finally the moment is right for nuclear to take a role in the context of COVID-19 — ‘rebuilding better’ and the opportunity to reduce emissions.

Renewables have had enough time for their limitations to become well understood, but nuclear needs to present solutions. That is not only reducing carbon emissions and providing bulk power generation. It must embed itself deeper in the energy system, with entrepreneurial offers that link it to new investors, electric vehicles, process heat, hydrogen and aviation fuels. These are all benefits of nuclear we have been talking about for years, but they need to be contracted, demonstrated and made real by the industry itself. We can’t expect anyone else to make an approach.

The nuclear industry needs to stop saying that its misfortunes are all the fault of anti-nuclear campaigners or overly stringent regulation and recognise that while nuclear power plants may be resilient, the nuclear industry itself has long been extremely fragile.