Radiation awareness - why must this be tackled? 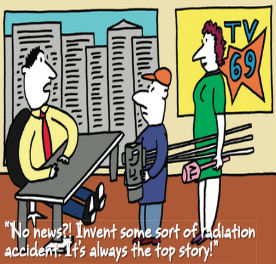 LAST MONTH’S ARTICLE CONCLUDED THAT there is still a space for nuclear power this century, but that there is a significant risk that it will become no more than a footnote in history.

A major theme of these columns in recent years has been that unless nuclear power overcomes what I call the fear paradigm, it has no chance of reaching its potential in providing reliable, clean and secure power for the world. Many reasons are adduced for nuclear power failing, such as poor public perception, timid politicians with short time-horizons, poor economics or specific issues such as safety, waste management, nuclear proliferation and nuclear security. These are all important issues, but there is a single underlying factor which dominates the whole picture, and that is fear. People are simply afraid of nuclear and a paradigm of fear has blighted the entire history of nuclear power since the 1950s. This is the real root of most of the arguments used against the industry.

This fear is based on fear of radiation. Something that cannot be detected by any of the five human senses, and has almost a perfect set of the characteristics psychologists say have “fright potential”. Its impact is involuntary, randomly distributed, difficult to avoid, unfamiliar to most people, man-made (if the nuclear sector is the source), could cause hidden and irreversible damage to health, and small children, pregnant women or more generally future generations are alleged to be particularly vulnerable. And finally, despite huge scientific investigation, apparently well-qualified experts seem unable to agree about it.

If people are afraid of nuclear, the onus is on the regulators to insist on enhancing plant design to cover every conceivable risk. The best then becomes the enemy of the good. The enhanced safety that Generation III plant designs offer is purely theoretical. The concept of core damage frequency estimates should surely have been junked after Fukushima, as the human dimension of safety is much more relevant.

The public has been informed since birth that nuclear is dangerous, so fear is entirely rational and is unlikely to be overcome by more facts. Images are much more powerful than facts in determining human beliefs, which once developed are not easily changed. The images the general public has seen start with the mushroom cloud, because nuclear power failed to distinguish itself from military applications. Popular culture, in the shape of science fiction novels and movies, has also been powerful in creating attitudes and beliefs about nuclear power and radiation. The facts never get in the way of a good story. Whenever dramatic effect is called for, nuclear can be wheeled in and the baddies seen to be misusing it. Nuclear and radiation have also become an easy story for journalists and death and destruction are good selling points, with stories about, for example, thefts of nuclear materials and possible “dirty bombs”.

At best, the industry is seen to be managing “doomsday machines” as safely as it can, while we find safer ways of generating electricity. Wind and solar power are the current favourite answers to this, but given their inherent weaknesses, are unlikely to be the last we’ll see.

It is radiation that essentially makes nuclear special. Although the industry does all it can to prevent any incremental exposure, it is impossible to avoid some additional releases with a minor degree of human exposure (even without accidents). This frightens people, and this feeling is unfortunately justified by a perverse international radiological protection regime.

Ultimately the industry needs to rebut the so-called linear no threshold (LNT) theory of radiation exposure. It is agreed that very high exposures to radiation (such as that experienced by atomic bomb victims in Japan in 1945 and some of the workers who tackled the Chernobyl accident) lead to Acute Radiation Syndrome and likely death. From these very high radiation exposures, a linear extrapolation to zero gives the probability of death for any lower doses and it is alleged that no threshold exists below which there would be no health effects. Any additional radiation exposure is asserted to be potentially dangerous and must therefore be minimised. Since the 1950s, official international advice on nuclear radiation (from UNSCEAR – the United Nations Scientific Committee on the Effects of Atomic Radiation and ICRP - the International Commission for Radiological Protection) has recommended that As Low As Reasonably Achievable - ALARA dose levels should be considered safe.

The nuclear industry has been largely content to go along with these principles, even though the risks to human health at low levels of exposure are purely theoretical and cannot be demonstrated. Vastly expensive efforts have been made to limit radiation exposure at operating facilities and to minimise the chance of major accidents.

The evidence suggests, however, that the LNT hypothesis is invalid when taken to low levels of radiation and that releasing additional radiation, within specified limits, should be acceptable. Some scientists go even further, arguing that low levels of radiation are actually beneficial to health, the so-called “hormesis” effect. This is arguably going too far. The industry only needs to convince people that the low levels associated with nuclear power are acceptable, and that it is not worthwhile spending huge sums of money in reducing exposures any further. If people are really concerned about human health, they would do far better devoting equivalent resources to other areas where there are obvious very negative impacts on human health. For example, reducing the number of people who smoke cigarettes, or improving road safety.

The experience of the Chernobyl and Fukushima accidents should have encouraged the industry. In both cases, the authorities evacuated regions where contamination was arguably far below any level of risk. It was evacuation that caused severe stress in the population, such as deaths among the elderly, or alcoholism and family break-up amongst those young. In the case of Fukushima, it is alleged that up to a thousand extra deaths unrelated to radiation have occurred. Today the authorities are still engaged in a ridiculous exercise to handle - at great expense - masses of waste water at the Fukushima site with levels of radiation so low that they have zero possible negative impact on human health. The important question today is “how do we protect people not so much from radiation but from the effects of the established radiological protection regime?”

There has been a complete failure to communicate the facts about radiation and its impacts to the general public and to politicians and decision-makers who set standards.

When passengers board commercial airliners, if they ask the pilot, “Is it safe to come on this flight” he will answer, “Of course it is”. A few may have some fear of flying and others will readily recognise that there will be a very small chance that the plane will crash with significant loss of life. But everyone is assured that as much as possible has been done to minimise the risk, which is definitely ALARA.

Contrast this with the position in the nuclear sector. Important lessons have been learned from Chernobyl and Fukushima, but not about radiation. If there was another accident tomorrow with some degree of offsite release of radiation, the same degree of confusion would ensue. There would be difficulties about everything, from the units of measurement used, to the safety (or otherwise) of remaining at home near the stricken plant. The Collective Dose Hypothesis will get wheeled about again, claiming thousands of additional deaths due to alleged very small increments of cancer risk within a large population of millions.

Clearly a major contributor to the damage caused by any industrial accident like Fukushima is the potential for irrational response from governments and institutions, a factor frequently overlooked in safety studies. We consider the possibility of operator error, but we do not consider the potential idiocies of regulators and politicians. It is certainly not better to try to preserve the lives of persons by being conservative in the level of radiation exposure – there is no place for a precautionary principle. Rather than the industry having to show that there is no impact from low radiation doses, the onus should be to prove some degree of harm at some given dose. The question is, at what point do we acknowledge that “conservative” means killing people - real people, not mere statistics? This is what happened as a result of the excessive evacuation orders by the Japanese government in the wake of Fukushima. In short, how do you contrast real, demonstrable casualties today with theoretical ones tomorrow, when the theoretical casualties are based on a statistical projection without supporting evidence?

The task of ensuring a better understanding of radiation and a more sympathetic regulatory regime is a huge one, but there are some forms of radiation that are already treated rather more sensibly by society. Ultra violet (UV) radiation is present in sunshine and its danger is well known to the general public. Education has concentrated on the need to cover up exposed skin by wearing appropriate clothing and on using sunscreen at appropriate ratings for skin types and expected degree of exposure. One difference is that exposure to sunshine is voluntary. People can choose not to go on holiday to sunny countries, and can cover up or use sun cream if they are to be exposed. Radiation from nuclear facilities, in contrast, is involuntary and there are few ways, apart from moving well away from the source, of taking personal action.

The industry is therefore facing a huge challenge in the area of communication about radiation. It has not realised the size of the challenge, nor devoted sufficient resources to facing it. A more aggressive approach is warranted and should be based on the principle that education and communication are cheaper and more effective than searching for technical silver bullets. The industry has spent decades and billions of dollars on the latter and still stands at an awkward crossroads.

One idea is to seek allies. For example, there is increasing concern about the possible dangers of exposure from nuclear medicine, and there are significant commercial interests which may be increasingly threatened. The public deserves to be able to understand the real truth. There may be some opposition to associating with the nuclear power sector, but surely the interests of both are similar.