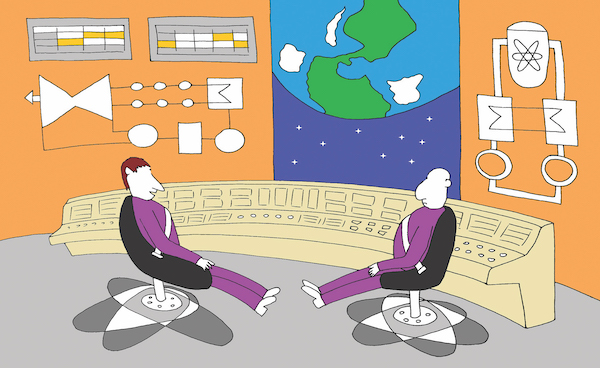 For the last two hundred years our species has used natural resources very freely. The general mode of development has been to proceed apace until the negative impacts on air, water, wildlife and so on become apparent to policy-making elites through lost profits or grievous injury to innocent people. At that point we have tended to slow down a bit and think about changing to other methods — but we have not normally changed our goals.

[Cartoon caption: “They did not tell me that the shift turnover at this plant is once per six months!” Cartoon by Alexy Kovynev]

The result is a familiar one. The cumulative impact has amassed to the point that scientists inform us we are causing a mass extinction and gradually warming up the Earth with all sorts of unpredictable, but mainly very bad, consequences. Even while we make progress to undo some of the damage and see, for example, a recovery of wildlife in industrialised Western Europe, some major indicators — like the amount of CO2 we emit — continue at record highs.

We haven’t even levelled off the CO2 line yet, let alone bent it towards the net zero level we talk about hitting in just 29 years’ time. (By that time, NEI’s youngest readers will surely be leading a nuclear industry far larger than today’s.)

For these reasons it is generally accepted that ‘business as usual’ is the wrong approach, and that incremental change will neither be fast enough nor eliminate the underlying attitudes in governance and culture that caused the crisis. So what are the other options?

One approach with a lot of intuitive support is to constrain our resource use and limit ourselves to the so-called ‘planetary boundaries’ so that we stop compounding our impact. While most of the world’s population will continue to increase consumption and their standard of living, developed countries would have to hold steady. They would have to adapt to making less impact, which might mean actually doing less and consuming less than they do now. Most of us are already doing this somewhat in our personal lives, but it is obvious that the world’s most powerful countries are not going to accept standing still and letting their advantage disappear. Nor will they somehow be able to recognise the ‘next big thing’ that increases resource use and stop someone from inventing it. (Bitcoin, anyone?)

A more positive vision is one where technology develops at such a pace that it allows us to replace problematic technologies with alternatives that are so much better that they let us sidestep what were imagined to be planetary limits. This is sometimes called the ‘Star Trek future’. With truly minimal-impact technologies we could enjoy many times more resource use and still leave plenty of space for ecosystems to recover. It would need energy technology and manufacturing to go through something like the Green Revolution, which changed food production by rolling out the most effective farming practices, seeds and fertilizers to produce a lot more food on the same amount of land. It is thanks to this that we can feed the eight billion people currently alive on Earth. It means a comprehensive levelling up from current infrastructure to new versions that tread more lightly on the Earth, while yielding more for us.

Sadly, even some of the human race’s greatest achievements like this have activist opponents. For example, Vandana Shiva, who advised the Sri Lankan prime minister Mahinda Rajapaska to ban fertilizer and mandate fully organic food production on the island. It took just a few months for production to collapse and a food crisis to begin.

Similarly, an increase in carbon intensity will come immediately when Belgium closes its nuclear power plants and replaces them with imported gas, as it is determined to do in 2025.

But technological visions have their evangelists, too, including some who really take it to the ‘Star Trek’ extremes, as Jeff Bezos did recently by saying it is “inevitable” that we will put all the world’s polluting heavy industry into orbit. Fantasy, perhaps, but there are technologies on Earth that are already sidestepping previous limits and opening possibilities we hadn’t imagined before.

There is an ore deposit called Baimskaya in a remote region of Russia’s eastern Arctic. It is one of the world’s largest, with 2510 million tonnes of mineral resources including copper, gold, silver and molybdenum. The only problem is that there is no infrastructure anywhere near it — no power, no roads, no airports, no seaports. To access the resources means building all of that virtually from scratch, which is why it has never happened.

I think you know what I am going to say: nuclear can do it. In fact, nuclear is already doing it. Rosatom’s subsidiary for icebreakers and floating plants, AtomFlot, signed a preliminary agreement at the start of September to supply two floating power plants, each with two 106MWe RITM-200N units. The first two should be online by 2027, in time to power the completely new port that will be constructed at Cape Nagloynyn that will ship out the ore coming from Baimskaya on a dedicated 428km road.

Cape Nagloynyn is about 68km across an Arctic bay from Pevek, where the first floating plant, the Akademik Lomonosov, is already operating and supplying power to the advance teams at the Baimskaya site using a specially constructed transmission line. During construction of the mine the Akademik Lomonosov will provide up to 20MWe. Once in operation Baimskaya will demand more than 300MWe, all of which will be supplied by the Cape Nagloynyn floating plants. This daring mega-development is nuclear powered all the way.

Rosatom’s statements put the price of delivered electricity at RUB 6 per kWh, which works out at about $82.48 per MWh. Incredibly, this is at least one-third less than UK power consumers will be paying for electricity from Hinkley Point C, which goes to show it is not the economics of atomic fission itself that are questionable but rather the economic circumstances we have chosen to put around it. More to the point, this project shows that nuclear technology can make possible what was impossible before. Not for the first time Russia is going to be a pioneer in the use of nuclear, but other rich resource fields exist, notably in Canada, that are waiting to be unlocked.

What a conflicting situation for proponents of the vision of constrained consumption. They will hardly be advocates for huge Arctic mining projects, yet the energy-efficient electric vehicles, battery storage and wind and solar generators they demand will need a lot of copper. Baimskaya’s 9.9 million tonnes of copper will be among the world’s lowest CO2 options, having been mined and transported almost exclusively using nuclear electricity. It is a huge source of clean copper coming available at just the time the world needs it.

The fact is no single vision of development on Earth will ever dominate. I started by saying our society had liberally used resources to their limits, but that is only really true of the most rapacious countries and cultures of the 20th Century. Plenty of cultures, especially indigenous ones, were able to live in much more harmonious ways. Perhaps it is ironic that the developments powered by small reactors that completely leapfrog fossil fuels and unlock huge resource fields will take place in remote areas where indigenous people have lived for centuries more or less within the resources offered by the land.

There will always be conflict between popular visions of the future, but when development is clean there can be plenty of space on Earth for multiple visions to be pursued simultaneously. They can even be complementary.