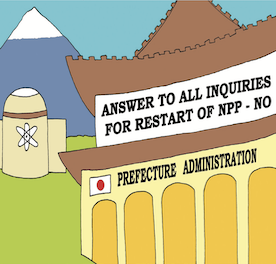 Japanese leaders insist that nuclear must have a role in the country’s energy future, but their declarations of support can’t do much to convince key communities. By Jeremy Gordon

NUCLEAR POWER IS ‘INDISPENSABLE’ for Japan to reach its net-zero goal in 2050, energy minister Hiroshi Kajiyama told the Financial Times. As well as facing geographical challenges to scaling up renewables, Japan faces difficulties in securing LNG supplies from global markets. After LNG prices spiked to record levels during a cold snap in January, Masakazu Toyoda, the CEO and chairman of the Institute of Energy Economics (IEEJ), said the case for nuclear power was stronger than ever. These words follow a message from Eiji Hashimoto, chairman of the Japan Iron and Steel Federation, who called on government to find a solution to high power prices and to restart nuclear plants. Hashimoto even called for nuclear power to be expanded. And of course the nuclear industry itself wants to get back to full operation. The Japan Atomic Industrial Forum’s president Shiro Arai said, “To achieve carbon neutrality and improve energy self-sufficiency, Japan will have to restart the remaining idle nuclear reactors as soon as possible, and endeavour to replace older plants and build additional new ones.”

Toyoda summarised the main reasons why nuclear plants have not restarted in an article for the World Nuclear Association’s World Nuclear News. Two of the reasons relate to engineering and licensing: slow progress meeting regulatory demands; and the difficulty of building certain anti-terror facilities. The other two relate to public trust: injunctions by local courts which have forced reactors back to shutdown; and those local governments that are unlikely to consent to restarts.

Unfortunately, public declarations of the need for nuclear can do little to build support for restarts.

Before 2011, I learned as a reporter there was a courtesy in Japan for utilities to ask the local government’s permission before restarting a reactor – a uniquely Japanese process of deferral and respect which was essentially a formality. In practice, the elected officials would always grant permission and operations would continue according to schedule. But all this changed the moment that control was lost at Fukushima Daiichi.

Sometimes it is forgotten that it was the will of local officials that forced a gradual shutdown of the Japanese nuclear fleet after the accident of March 2011. One by one the reactors closed for refuelling, but the courtesy of asking to restart had become a matter of grave importance and most utilities did not even ask, because they knew the answer would be ‘no’.

It was not until September 2012 that the Nuclear Regulatory Authority was created, and its new regulations did not take effect until July 2013. Despite efforts to ensure regulations were all-encompassing and the personnel were fully independent, it did not replace the need for local permission to operate. What is more, local courts have the power to order a shutdown if a judge can be convinced that procedures were not followed properly.

The result has been a situation where it is unclear who really makes decisions on matters of nuclear safety. This is unsatisfactory for everyone involved and has strengthened the image of nuclear energy as an industry whose legitimacy is contested.

The sight of big industry publicly fighting the will of a community can only deepen trust issues.

In theory a sufficiently independent and expert regulator would command enough trust from all sides to avoid too much second-guessing. If there was a chance to achieve such a predictable system in Japan it was missed, and the national government does not indicate it wants to try again. We have to accept that in practice the Japanese system gives precedence to the ‘social licences’ issued by local governments over the operating licences issued by the regulator. This is why the decade-long collapse of public trust remains the real barrier to a successful post- Fukushima nuclear industry in Japan.

Frustrated at the slow pace of restarts, the strategy from Tokyo now is apparently for the government and various technical and industry authorities to reiterate the importance of nuclear. But if they hope to influence senior local leaders into softening their positions, I think they will be disappointed. Top-down declarations are of very limited benefit in building support and may even be counterproductive.

Consider the results of a Pew Research Center survey on public trust in science, published in September last year. It revealed that only 5% of Japanese people have ‘a lot’ of trust in the national government to do the right thing, the second lowest of the 20 countries polled. Only 4% have ‘a lot’ of trust in business leaders to do the right thing. There is little hope that statements by a government minister or the nuclear power industry will have any influence.

The regulator and independent scientific bodies might have more of a chance. Pew found that 23% of Japanese people have ‘a lot’ of trust in scientists to do what is right. While this is significantly better than government or business, it is still one of the lowest national results and does not compare very well with the median of 36% across other countries.

I suspect that many local leaders are convinced of nuclear’s benefits for the region and the country as a whole, but citizens understandably feel vulnerable to potential nuclear accidents. And when people feel vulnerable they will not support officials (who they do not trust) to act on their behalf with big business (who they trust even less). Given the Japanese public’s scepticism about nuclear power, science and elected officials we should expect them to use their votes accordingly.

This is exacerbated in a country where nuclear has not operated for ten years. Industry is asking people to go from a status of zero risk to a status of some level of risk, however uncertain.

This kind of step into the unknown puts the focus absolutely on trust.

Trust is a difficult thing to define, but in his 1979 book Trust and Power the sociologist Niklas Luhman concluded that to trust an institution it must hold a mix of good intentions. To be trusted, a company must be competent and must take into account the interests and vulnerabilities of people. Unfortunately, not much of this can be demonstrated by speeches, op-eds or public letters about economics. The risk of a top-down approach would be to neglect the interpersonal level while giving the microphone to elites that the public trust the least.

When people feel vulnerable they usually want to be recognised and to be heard. In the context of nuclear power this means setting up appropriate conversations in which they can explain all the reasons they are sceptical and ask all the questions they want.

This is exactly what Japanese utilities have been doing successfully in the areas near their power plants. In many cases meeting someone from the nuclear sector who has taken time to listen will bring some humanity to the industry and cast new light on the information someone already has.

The problem for industry is that populations near the plants are very small compared to the capital cities of the prefectures, where people have no close connections to nuclear and are not interested in talking. City populations hold the bulk of democratic power, yet efforts to reach them have fallen between the bottom-up and the top- down approaches.

Despite this huge challenge facing Japan, I believe there is potential for the Japanese public to take a different view on nuclear power.

Even though the Pew survey showed 68% of Japanese people oppose expanding nuclear, 24% support expansion. Pew also found that 70% of people say climate change is a ‘very serious problem’ and 75% say air pollution is a ‘very serious problem’. It found that 56% of people say the government is doing ‘too little’ to reduce the effects of climate change.

The challenge for Japan, even more than meeting the high bar of regulation, is to find a range of advocates to connect those facts in a way that makes city populations listen.