Nuclear’s environmental impact – is it trivial? 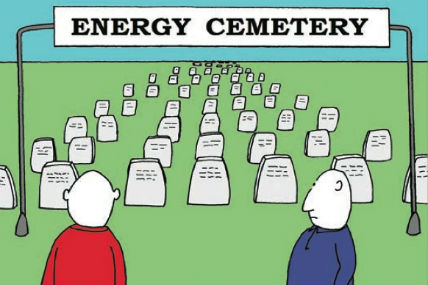 The costs of building large numbers of nuclear power plants are now under question, particularly as fossil fuels have become cheaper and renewable energy solutions are achieving cost reductions. At least some of the deteriorating economics of nuclear can be put down to regulatory impositions because we have failed to communicate that the technology is essentially safe and free of other so-called external costs. Nuclear cannot offer perfect security of supply if plants are subject to either temporary or permanent closures because of these fears.

If the strong credentials of nuclear on health, safety and environment can be established, the complaint that it faces discriminatory treatment by governments and indeed by society as a whole becomes more powerful. As discussed in last month's article (November 2015, 'The level playing field - what about the auto industry') other industrial sectors have had a comparatively easy ride. Their products are now under a much higher degree of scrutiny. Nuclear was arguably one of the first industries to experience this heightened evaluation. Now it must convince people that it has passed with flying colours.

It is climate change which has risen to become the prime challenge. Nuclear power's credentials here are very good, but it has achieved very little recognition. Claims that the nuclear fuel cycle and power stations contribute substantial amounts of greenhouse gases have been largely dismissed.

But nuclear advocates have unwisely concentrated too much on climate change (see January 2015, 'Is climate change the worst argument for nuclear?'). Other environmental concerns such as air and water pollution and the wider impact of industrial activities (such as in the oil and gas, chemical and steel industries) are arguably more important in today's world and are having substantial impact on people's lives. Even the agricultural, fishery and forestry sectors have a huge and potentially negative impact, as seen by the current concern over the mass burning of forests in Indonesia.

The health, safety and environment impacts of urbanization around the world have to be carefully considered. This is gradually happening as measures of human wellbeing, other than the usual gross domestic product (GDP), are being seriously considered. This includes trying to put a value on the world's "natural capital", in other words the natural assets, whether renewable (like fish and forests) or non-renewable (like oil and minerals).

In relation to these huge issues, the nuclear sector looks inconsequential. Building and then operating 400 or so large nuclear reactors, fuelling them with a fuel cycle starting with only 60,000 tonnes of natural uranium a year and then managing a relatively small amount of radioactive waste does not appear very significant in scale. To the extent that there is any additional exposure to radiation, it is localised and, even in most accident situations, arguably inconsequential. Waste management and decommissioning activities are also highly localised and have little impact on the lives of even the people living close to the relevant facilities.

Serious studies back up this conclusion. ExternE, a major European study of the external costs of various fuel cycles for generating electricity, was released in 2001. The European Commission launched the project in 1991 and it "put plausible financial figures against damage resulting from different forms of electricity production for the entire EU". The external costs are defined as those incurred in relation to health and the environment, and quantifiable but not built into the cost of the electricity to the consumer and therefore are borne by society at large.

They include the effects of air pollution on human health, crop yields and buildings, as well as occupational disease and accidents. The methodology measured emissions, dispersion pathways and their ultimate impact. Exposure-response models led to evaluating the physical impacts in monetary terms. For nuclear energy the risk of accidents is factored in, along with estimates of radiological impacts from mine tailings and carbon-14 emissions from reprocessing (waste management and decommissioning being already within the cost to the consumer).

The report showed that in clear cash terms nuclear energy incurs about one tenth of the costs of coal. Nuclear energy averages under 0.4 euro cents per kWh (0.2-0.7), less than hydro. Coal is over 4 cents (2-10 cent averages in different countries), gas ranges from 1-4 cents and only wind shows up better than nuclear, at 0.05-0.25 cents per kWh.

Economists would argue that these external costs should be incorporated in the electricity price paid by consumers or else there is a misallocation of resources. This could be achieved by imposing appropriate taxes to reflect the external costs, with the revenues sufficient to compensate society. This would considerably alter the mix of electricity generating capacity in favour of those with low external costs - nuclear, large hydro and the renewables. However, there are substantial political barriers to this being achieved, as society has always subsidised fossil fuel use, by ignoring its pollution costs.

The report proposed two ways of incorporating external costs: taxing the costs or subsidising alternatives. Taxes are difficult, so subsidies have been favoured and renewable energy has certainly received plenty of these. Yet these have not extended to nuclear power, despite the comparable external costs avoided.

External costing suggests that the public health benefits associated with reducing emissions from fossil fuel burning could still be the strongest reason for pursuing closure, in addition to climate change concerns. Thousands of deaths could be avoided in urban areas each year by reducing fossil fuel combustion in line with greenhouse gas abatement targets. The World Health Organisation (WHO) in 1997 presented estimates, of 2.7 or 3 million deaths occurring each year as a result of air pollution. In the latter estimate, 2.8 million deaths were due to indoor exposures and 200,000 to outdoor exposure. The lower estimate comprised 1.85 million deaths from rural indoor pollution, 363,000 from urban indoor pollution and 511,000 from urban ambient pollution. The WHO report points out that these totals are about 6% of all deaths. Moving to cleaner energy has huge benefits to the world.

One interesting area is that of accidents related to energy production. A November 1998 study from the Paul Scherrer Institute in Switzerland drew on data from 4290 energy-related accidents, 1943 of them classified as severe, and compared different energy sources. It considered over 15,000 fatalities related to oil, over 8000 related to coal and 5000 from hydro.

Considering only deaths and comparing them per terawatt-year, coal has 342, hydro 883, gas 85 and nuclear power only eight. Given that nuclear power annually delivers some 2500TWh per year to the world, these eight deaths would be at an average 2.3 deaths a year. Coal produces more than double nuclear's share of world electricity and works out at 216 deaths per year. In terms of number of immediate deaths per event from 1969 to 1996, perhaps surprisingly hydro stands out with about 550 compared with coal at around 40.

The studies show that nuclear power is certainly not a bad citizen. It is very safe to work in and has very limited impacts on the environment. The battle to achieve acceptance of these important facts is a very slow and hard one, and it is one that the industry is only slowly winning.

The key area is clearly to convince people that even if there are small incremental releases of radiation, the impacts will be highly localised and of no severe consequences. If this can be achieved, the issues on other key areas can much more easily be addressed. The "big three" here are the consequences of major nuclear accidents, nuclear waste management and the fear of nuclear proliferation and terrorist thefts of nuclear materials.

It is widely agreed that the nuclear industry can no longer maintain that accidents will never happen and it must argue that if they do happen, the consequences will be controllable and relatively minor. This is difficult after the Fukushima accident, which was very badly handled by all concerned. Until the radiation dragon is slain, one cannot have much confidence that future accidents will be handled any better. The fear that has affected the entire history of nuclear power must be overcome and radiation is the key (see September and October 2015, 'Overcoming the paradigm of fear, Parts 1 and Part 2').

The waste issue is often cited as nuclear's "achilles heel" but in reality, it should be a strength. Unlike the generation of electricity from fossil fuels) all the nuclear wastes are identified and contained. Even in a worst case scenario where there is a release of radiation from a waste facility, any impact is likely to be highly localised and of little consequence to humans. Of greater difficulty is the issue of how long the waste will remain dangerous, and the multigenerational aspects of geological repositories need careful handling. Under natural capital principles, it is impossible to impose a huge burden on future generations by activities today, so the industry must be able to convince critics that what is passed on is easily manageable. Multinational repositories are one answer here, lessening the potential burden on countries with only a small number of operating reactors.

The proliferation and nuclear security issues are also closely related to the understanding of radiation, but need careful handling nevertheless. The fear of nuclear war has undoubtedly diminished as the world has learned to live with nuclear weapons, but is still too easily linked with the civil nuclear sector. If more countries in the Middle East employ nuclear power (after Iran and the UAE), these concerns are likely to remain active rather than simply fade away, but they must be kept in proportion.

This article was first published in the December issue of Nuclear Engineering International. Download a PDF of the article now.