Nuclear slowdown – why did it happen? 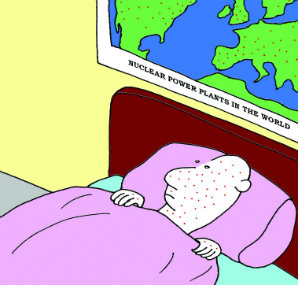 I often show in my presentations a map of the world demonstrating the location of all the operating nuclear power stations as red dots. Anti-nukes in audiences have sometimes referred to it as the "smallpox map", which is only slightly funny. The map shows that nuclear power is currently heavily concentrated in just three regions of the world: the eastern side of North America (in both the United States and Canada), Western Europe (with relatively fewer plants as one moves eastwards from France and Germany) and finally East Asia (currently concentrated in Japan and South Korea but with some of the Chinese nuclear bases becoming more prominent). One thing that is striking is that there are hardly any plants in the southern hemisphere - just two reactors in each of Argentina, Brazil and South Africa. To some extent, this reflects world economic progress, with the South lying a long way behind the North, but there are significant populations in many of the countries south of the equator needing access to reliable and affordable power as much as those further north.

Another slide I usually show breaks down the age structure of the operating units around the world and makes the point that many are now 20-40 years old, dating from the period of rapid growth for nuclear power in the 1970s and 1980s, with dramatically fewer reactors coming on-line in the 1990s and the first decade of the 21st century. There has of course been much talk in recent years of a "nuclear renaissance" but in terms of global reactor start-ups, it clearly hasn't happened yet. The annual number is still in the low single figures, rather than in the high teens and 20s of the boom years. Once the Chinese programme begins to mature, it should be commissioning 5-7 new reactors a year, and the rest of the world may conceivably contribute another 5-7, but a return to the boom years is still some way off.

[Cartoon: The Unit by Alexey Kovynev "And remember -- no nuclear power plants for at least two weeks!" ]

The reactors in the southern hemisphere are fairly typical of the general pattern, with five of the six dating from the growth spurt in the 1970s and 1980s. Angra 2 in Brazil wasn't commissioned until 2000 but is arguably a delayed relic of the previous era rather than any sign of a 21st century revival. Although there are a number of common features in the history of nuclear in each of Argentina, Brazil and South Africa, there are also some important individual features. This also applies to the prospects for new nuclear build in each. There are now genuine prospects for further units in all three, but the circumstances are rather different. Brazil and South Africa have been included in the group of countries known as the BRICS, the large and rapidly developing countries of the world, while Argentina is regarded as a rather smaller (in population terms if not in geography) economic laggard.

We can therefore usefully cover the history and prospects for nuclear in each of these countries in articles over the next three few months, but it is useful to reflect further now on the more general picture.

An important point to make about nuclear is that although the technology in widespread use today is very mature, the industry itself is not. Assuming that the period of rapid growth does eventually return (if not in the years to 2020 but in the decades beyond that) the years from the late 1980s until now will seem like a historical curiosity. The generally upward trajectory of nuclear from the early days of commercial nuclear power in the 1970s somehow got cut off for a pause of about 25 years before picking up once again. But what caused this "pause for breath"?

Although there are reasons specific to individual countries, the overall explanation is a subtle mixture of national economic performance, nuclear economics, public acceptance and developments in other energy markets. Some commentators are prone to generalise by blaming everything on, for example, the accidents at Three Mile Island and Chernobyl, or on the economic consequences of delays to reactor construction schedules, but the complete picture is much more complex and depends on many factors influencing each other. Once these are considered, the general picture becomes clearer.

Irrespective of what was happening within the nuclear sector itself, most countries where reactor programmes became established in the 1970s and early 1980s suffered poor economic performance in the period afterwards. For one reason or another, electricity demand growth slowed as countries struggled to make economic progress. In many, high inflation rates combined with rising unemployment (the dreaded "stagflation"). The most promising developing countries, such as Brazil and South Africa, shared in this general malaise; China and India hadn't yet started on their current rise, South Korea was an honourable exception.

Political difficulties can be seen as having played a role as well in many countries. We know that nuclear programmes need the steady support of governments, but many existing and prospective nuclear countries went through turbulent times during this period as democracy was gradually established. Argentina and Brazil moved away from rule by military juntas, while South Africa was going through the end of the apartheid regime and the transformation to black majority rule. The fall of the Soviet Union in 1989 undoubtedly had a major impact on the nuclear programmes there and in Eastern Europe. In this era, many industries failed to meet the growth rates of the previous period. But the slowdown in nuclear was particularly dramatic, so there were clearly other important forces involved.
Nuclear economics provides another important explanation. In the United States and the United Kingdom, reactor construction schedules were extended and reactor costs began to escalate sharply. The regulatory scrutiny of the industry definitely increased following the two significant accidents but this cannot provide the whole explanation, as with nuclear technology maturing, the experience of other industries would suggest that costs should have come down.

Looking back, by not consolidating around a small number of standardised reactor designs, the nuclear industry failed to achieve the scale economies in construction that other industries achieved. Although there was some consolidation of vendors, nationalism (and the UK is a particularly bad example of this) led to inefficiencies that added to overall reactor costs, making them less attractive propositions when compared with alternative generating options. When power markets began to liberalise from the late 1980s onwards, it became even more difficult to justify going for expensive assets that took a long time to pay back the initial capital. The operating performance of reactors was also relatively poor in the late 1980s and 1990s, certainly compared with today. If the expensive assets had run at 85% or 90% of capacity, the economics would have looked more favourable, but it has taken time to cut down the number of unexpected reactor shutdowns ("scrams") and get outage lengths to lower levels.

Public acceptance of nuclear also became an important factor and undoubtedly had some direct and indirect influences. The direct influence came through the political process which turned some countries away from nuclear power, particularly after the Chernobyl accident in 1986. This was particularly important in Europe where the accident strengthened anti-nuclear sentiment. In the United States, the role of the Three Mile Island in 1979 has been rather overstated in explaining the nuclear slowdown. Although the "no nukes" movement had some impact in the political process, many new plant orders had been cancelled prior to the accident owing to the slowing economy and cost escalation. Arguably the bigger impact of both accidents came more indirectly through the stiffening of the regulatory regime, which in turn imposed additional costs in constructing reactors. In the United States, the regulatory regime at the time granted only a construction license, which then had to be followed up with an operating license once the plant was completed. Regulators frequently insisted on changes to plants at this stage, delaying start-ups and adding to costs.

Finally, nuclear is not isolated from trends in rival generating modes and in the general energy markets. The trend to market liberalisation has already been mentioned but there are other relevant developments. A lot of countries decided to start significant nuclear programmes as a result of the turbulence in the world oil market in the 1970s for energy security reasons. France and Japan were notable here, but slowing economies and the discovery of additional oil reserves after the sharp price rises in the 1970s meant that the late 1980s and 1990s became a much less turbulent period in world energy markets. Gas also became an important element in power generation at this time, as rising reserves prompted the use of gas in power stations as well as for space heating. We know that the economics of gas generation depend almost completely on the gas price but the relatively low costs of building gas units became an additional persuasive factor in competitive power markets.

So nuclear somehow lost its way in world electricity supply. Its share had risen to 17% by the late 1980s and then managed to remain constant through the 1990s, despite the slowdown in new reactors coming online. This is explained by the achievement of rising capacity factors, but this could only help for so long, as limits became reached in many countries and the growth of electricity demand (spurred on my China, India and other developing countries) surged upwards again in the 2000s. The share of nuclear in world electricity has now fallen back to 14% and it will now struggle to maintain this level unless the level of commissioning new plants does in fact rise sharply.

The final chapter in the story is the rise of environmental awareness and of renewable energy technologies. This is as important in the Southern Hemisphere as in the North, and provides both opportunities and challenges for nuclear. The general consensus today is (particularly with the economic recession in much of the developed world) nuclear's "clean" credentials are unlikely to be sufficient alone to spark a revival and that better economics and public acceptance are more important. The environmental factor could benefit nuclear economics via carbon taxes or emissions trading, but it has to be seen as a nice bonus for the industry, rather than a right or expectation. The industry has to look at itself more closely and find ways to build plants more cheaply and win public acceptance through its own efforts. It cannot depend too much upon direct help from governments or on movements in the prices of oil and gas, over which it has no influence.

Steve Kidd is now working independently with East Cliff Consulting after nearly 18 years in senior positions with the World Nuclear Association and its predecessor organisation, the Uranium Institute.