Nuclear security - is it a big issue? 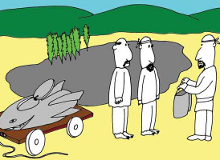 Those opposed to significant growth in nuclear power, to satisfy rising electricity demand, national energy security of supply objectives and the global need to curb greenhouse gas emissions, employ a number of arguments to make their case.

[Cartoon: "The plan has changed; now we have decided to use a dirty bomb. So you have two hours to make one." -By Alexey Kovynev]

The majority of these can easily be shown to rest on faulty understanding of the real situation or just plain bad analysis - for example the claim that the uranium will soon run out or, even more ridiculously, that the move to lower-grade mines, requiring heavy energy inputs to process the ore, may actually result in nuclear power consuming more energy that it produces. The anti-nuclear movement's intention is mainly to muddy the waters by bombarding the public with as many arguments against nuclear as they can, on the basis either that one or two may stick, or that the sheer weight of arguments will wear the public down, so they opt, seemingly reasonably, for a new gas plant or some wind turbines.

The more respectable arguments employed against nuclear largely come down to the assessment of very low-probability but potentially high-consequence risks. Human beings are notoriously bad at this and frequently reach what seem to be illogical conclusions. There are essentially three issues to address here, the so-called 'three Ss' -- namely the need for safety, security and safeguards. It is somewhat unfortunate that they get linked together, particularly by the IAEA in Vienna, which has the impact (from a public-acceptance perspective) of yet again worrying the average observer by the sheer complexity and number of issues involved. Some more clarity and distinctions would clearly help.

Safety relates to operating nuclear facilities without significant release of radioactive materials through a good safety culture and operating standards. It's what we've been reading about ad nauseum since the Fukushima accident, with discussion of the IAEA safety standards, their application by the responsible national regulators, the various stress tests with their subsequent requirements for plant improvements, and the expanding role of WANO as a useful operator's club to help secure the highest standards.

Security, on the other hand, relates to prevention and detection of (and response to) theft, sabotage, unauthorized access and illegal transfer or other malicious acts involving nuclear material and other radioactive substances and their associated facilities. So it's essentially preventing nuclear materials getting into the wrong hands (that is, potential nuclear terrorists) either through incursions into nuclear facilities, interception of nuclear transports or other trafficking of sensitive materials. Which is surely quite distinct from safety, about which the only thing it has in common is the need for guidelines for handling nuclear materials in the same way that IAEA has developed extensive safety standards. As with safety, these are consistent with and complement international conventions (for example the Convention on the Physical Protection of Nuclear Material) and codes (for example the Code of Conduct on the Safety and Security of Radioactive Sources). This is all pretty clear, but at the IAEA, safety and security are all in one department headed by a deputy director general (DDG).

The third 'S', safeguards, is covered by a separate IAEA department, again headed by a DDG, and is by far the largest in Vienna. This covers the threat of nuclear proliferation, in other words the risk of nuclear weapons spreading to more countries, effectively by civil nuclear materials getting into the military sector. Although some fantasists believe a terrorist organisation could develop a weapon from trafficking nuclear materials (hence a link with security), the real concern here is with State actors 'doing a North Korea' (or 'an Iran,' if one believes that Iranian intentions are bad) and developing a clandestine military nuclear programme. The 1970 Treaty on the Non-Proliferation of Weapons (NPT) is key here and is backed up by all the Safeguards Agreements (policed by IAEA), and by the Nuclear Suppliers Group provisions on export controls.

Having cleared up the distinctions (which is important as there are important lobbying influences who are intent on avoiding this) it is obvious that nuclear safety is hugely important and is rightly much discussed. Non-proliferation is also an important and significant subject, and will be discussed in next month's article. But is all the attention paid now to nuclear security really justified? On the face of it, the answer must be "yes". There have been two large international Nuclear Security Summits (Washington in 2010 and Seoul in 2012) with a third to follow in The Hague in 2014, with many national presidents and prime ministers in attendance. So someone seems to be taking it seriously, while there are bodies such as the Nuclear Threat Initiative (NTI) and the World Institute for Nuclear Security (WINS) working away in the background. Yet the Seoul summit earlier this year amply demonstrated that the ground is rather weak - to be frank, if such a collection of worthies is to get together every two years, there are far bigger world problems to discuss. The risk is that such summits will become no more than a charade, as the climate-change meetings have become.

Is all the attention paid now to nuclear security really justified? On the face of it, the answer must be "yes"

The other point to make about Seoul (and Washington) is that the people going there often don't themselves understand the distinctions between the 'Ss' made above. Indeed, some languages make no distinction between nuclear safety and nuclear security, so it's not surprising! Although summit summaries make some of the right noises, for example "consolidating the global nuclear security architecture through universal adherence to international instruments and a rigorous review mechanism" and "curbing terrorism financing", a lot of it gets into what are really non-proliferation areas: "asserting more stringent control over fissile materials". Many of the presentations at Seoul were also heavy on nuclear safety themes.

Even if nuclear security is not in itself a big issue, there is clearly a risk that holding international summits gives the opposite impression and will be picked up by industry critics. On the other hand, advocates assert that such high-level events make it quite clear to any potential nuclear terrorists that everyone is taking the issue hugely seriously and they will find misbehaving extremely difficult.

One problem is that nuclear security (and non-proliferation) have powerful lobby groups behind them. Although most claim to not be anti-nuclear, in fact their position often amounts to no more than scaremongering. It is, however, understandable that concerns over the security of civil nuclear facilities and transport of materials have multiplied since the 9/11 terrorist attacks in New York in 2001. The possibility of attacks on nuclear plants has naturally now been raised, whether aircraft crashes or terrorist incursions into plants to acquire materials for weapons or to create an explosion or a major radioactive release.

Probably the greatest weakness of this argument is that it hasn't happened yet, despite the fact that there were considerably slacker arrangements in the past compared to today. When the former Soviet Union fell apart in 1989, there were a huge number of underprotected nuclear weapons, and many research reactors around the world were using highly enriched uranium without taking much care about security. While there is no room for complacency and further strengthening of arrangements may be warranted, the real risk of death and destruction is surely remote. The task of the atomic terrorist is fortunately far from simple. Isn't it interesting that terrorist incidents (with the possible exception of the sarin gas attack on the Tokyo subway in 1995) usually involve 'low tech' methods, such as people attaching bombs to themselves or taking over commercial airlines armed with box cutters and then flying them into tall, prominent buildings? There may not be, in reality, any substantive black market in nuclear materials, despite the stories we regularly hear of nuclear trafficking. The IAEA monitors this in some detail (and reports on it on its website) but the sum total is basically two halves of almost nothing. The comparison sometimes made with narcotic drugs is not reasonable: although drug seizures are known to be the tip of a very large iceberg with huge quantities escaping through the system, controls on the production, trade and transport of nuclear materials are much stiffer, and potential buyers are very limited in number. If a terrorist organisation could really do something big with what could be trafficked, the market would no doubt be larger. At most, they could create a 'dirty bomb' to contaminate an area, but there are easier ways to cause death and destruction, if that is what they want.

Security concerns have been addressed in recent years by deploying additional armed personnel, and other protection measures, while new nuclear plants are designed with the possibility of an aircraft impact in mind. Although such events are clearly not impossible, the entire 50-year history of civil nuclear power contains nothing to suggest that the risks are other than very remote. Little more can be done and the small risks should certainly not be allowed to dominate the assessment of potential future nuclear power programmes. Indeed, critics of nuclear power are very bad at keeping things in perspective, and fail to apply the same level of scrutiny elsewhere. For example, should football stadiums not be made completely safe for each of 80,000 fans, considering that a direct aircraft strike during a game could conceivably kill many thousands? Should the walls of the stadium have to be several metres thick?

Nuclear transport is an area where provisions have also been strengthened. Radiation detectors, tracking and tamper-proof devices have been introduced. About 20 million consignments of radioactive material (which may be either a single package or a number of packages sent from one location to another at the same time) take place around the world each year. Only about 5% of the consignments are fuel-cycle related, as radioactive materials are also used extensively in medicine, agriculture, research, manufacturing, non-destructive testing and minerals exploration.

The international regulations for the transport of radioactive material have been published by the International Atomic Energy Agency since 1961 and rightly aim to ensure the protection of the public and the environment from the effects of radiation during routine operations and when accidents occur. The fundamental principle applied in radioactive material transport is that the protection comes from the design of the package, regardless of the means of conveyance. However, security provisions are now rising in importance too.

WINS was established to provide an international forum where organizations and individuals who are accountable for nuclear security can learn, share and promote the implementation of best security practices -- in other words, rather like WANO in the nuclear safety area. Its main activity has been developing a variety of best practice guides on important topics relevant to security, such as developing security culture, performance metrics and security equipment maintenance. So its role is certainly a useful one, provided that the overall issue is kept in perspective.