Nuclear power - can it avoid oblivion? 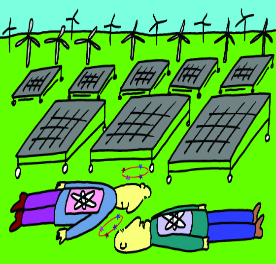 MANY OF MY ARTICLES SEEM to start with the statement that “nuclear power stands at the crossroads”. This has been the case for the 14 years that I’ve been writing for this magazine and remains true today. It may still constitute an appropriate summary of the state of the industry 20 years from now. My feeling, however, is the next few years will determine the fate of nuclear power, one way or another.

In terms of nuclear power generation and annual uranium consumption, the position today is not so different from when I joined the industry in 1995. New reactors have started up to replace those going offline. But power demand has grown, so nuclear’s share of world electricity supply has fallen sharply. The share may stabilise over the next few years as reactor start-ups should more than offset those shutting down. But from the 2020s onwards that is in question, as the marked slowdown in the Chinese reactor approval process is beginning to affect the number of units under construction.

We may propose three scenarios for the period to 2050. Firstly, a continuation of the “muddling through” we have seen since the 1990s, whereby some countries build new reactors while others shut them down. Secondly, something resembling the World Nuclear Association’s ‘Harmony’ programme, whereby there is a rapid expansion of nuclear construction (to satisfy environmental requirements) so that there are perhaps five times as many reactors in operation in 2050 as today. Finally, there is a slow, lingering death scenario, where the number of new reactors fails to keep pace with those closing down and nuclear power gradually disappears from the world energy picture.

Although it is tempting to opt for the middle scenario, I find this the least likely. I don’t believe that analysts will be writing “nuclear power stands at the crossroads” ten years from now. Nuclear will either be on a strong upward turn or a rapid descent. It is possible to overstate the degree of real change happening in the energy world at present (the share of fossil fuels remains incredibly resilient) but the big questions on climate change, costs, security of supply and access are now actively discussed by the general public. Some form of energy transition is going to happen but, unlike in the past, will happen with a degree of active debate. Nuclear power is unlikely to stand still in this type of environment.

I consider oblivion for nuclear is far more likely than rapid growth. This is not because the opportunity for expansion has disappeared. Far from it. It’s very much still there, but the industry has wasted the opportunities that have opened up for it since the Fukushima accident seven years ago. It has failed to confront and overcome the main negative issue that confronts it, got stuck in a structure more in keeping with the 1950s than today and run poor, over-defensive public communications strategies with very little impact.

Nuclear still gets excluded from energy debates following pressure from anti-nuclear forces. But I think the exclusions are fully justified, as the general public is entitled to view nuclear power as dangerous and to be afraid of its expansion. The industry accepts this by embracing today’s perverse radiological protection regime, which says that any incremental doses of radiation are potentially hazardous to human health. If there is an accident with even a minor release of radiation outside the plant, the general public is, according to the industry, in danger of severe health consequences and faces probable evacuation. This is not acceptable for any energy technology in the 21st century. Harm to the public through either additional cancers or the negative psychological impacts of human evacuations has to be eliminated. Nuclear has to become “normal” if it is to have any chance of success.

I’m retiring from writing these columns in December and will spend this and the following three outlining how nuclear may still achieve growth rather than a slow death.

We must first be certain that there is a viable space for nuclear in the energy mix and it has not already been snatched away. The good news is that world power demand is set to carry on growing rapidly, as outlined in successive editions of the International Energy Agency (IEA) World Energy Outlook. So at least nuclear is positioned in a growth market, where energy is increasingly delivered to the customer via electricity. The clear trend towards electrification of the transport system is highly favourable. There remain doubts as to how quickly and deeply this will spread, but if the electricity is supplied by fossil fuels there is little emissions benefit. Other good news is that more of the world’s population is living in major urban areas, and this trend is set to continue strongly.

This suggests that there will be a significant and increasing requirement for large scale power generation.

This is one reason why coal-fired generation retains a significant role in the IEA’s scenarios to 2040 and beyond, despite the competition from renewable power sources. Renewables’ diffuse (and often intermittent) nature makes it difficult to satisfy huge continuous requirements for base load power in one place. A lot hangs on developing of battery storage, but it would not be impossible for renewable power to take up 75% or even 100% of power generation in major urban areas. However, the financial costs of doing so look prohibitive, while the threat to security of supply is obvious. For at least the next 50 years, there will be a substantial need for large scale concentrated power generation to gradually replace fossil fuels.

Another important factor in the future of world electricity is the switch in demand growth to the developing world. This is neither good nor bad for nuclear. That demand will grow slowly or not at all in many countries where nuclear power is well established is not so favourable. In Western Europe and North America, nuclear power’s prospects are constrained by lower electricity demand, as it seeks to take a greater share.

Elsewhere in the world, rapid electricity demand growth certainly offers many opportunities. In developing countries, however, it will be difficult to establish nuclear programmes because of the nature of demand, the available alternatives and the challenges of establishing sound regulatory regimes. The 50 or so fast-growing African economies cannot be regarded as a serious market for nuclear power, at least until its future has become better established elsewhere.

It must not be forgotten that electricity is rather easy to produce. Schoolchildren manage it in their science lessons, so nuclear is in a very competitive market. The substantial investments in energy technology, including storage and saving, suggest that the nuclear sector must watch its back.

Power market liberalisation and distributed generation make things much more difficult for nuclear. As power markets are liberalised (and sometimes privatised) it becomes increasingly difficult to invest in any technology which has high capital costs but stable annual returns over the longer term. The arrival of large quantities of intermittent renewable power on the grid, either wind or solar, naturally poses significant problems for the traditional large-scale generation modes. Wholesale power prices become more volatile and once the renewables share rises above 20% there are likely to be periods in which even nuclear stations are required to load follow. This is far from the ideal.

There is plenty of discussion today about the transition to renewables. Some commentators regard it as a certainty but the world has never before transitioned to new forms of energy that are less reliable, arguably more expensive and yet still have a large environmental footprint (for example the problems of disposing of toxic metals in redundant solar panels). It is my belief that the case for large scale centralised power generation will eventually be recast. It may take 20-30 years, but disadvantages of renewable power sources will mean that they will be rejected as a valid energy solution. Wind and solar will likely retain an important position in power generation, particularly in developing countries. Elsewhere, they may be increasingly regarded as providing no more than fuel-saving for natural gas stations, when the wind blows and sun shines.

Nuclear’s unique selling proposition has always been that it can provide huge quantities of power from a very small initial fuel input, securely and with little environmental impact. In recent times, its low-carbon characteristic has been somewhat overplayed by advocates. There are plenty of strategies for avoiding carbon emissions, from energy-saving to alternative low-emissions technologies, but nuclear will only succeed where large quantities of concentrated power are required.

Promoting a technology mainly on what it doesn’t do is frankly absurd.

In fact, urbanisation is absolutely crucial to the future. If coal is ruled out for environmental reasons, gas not available everywhere cheaply and hydro unavailable for geographical reasons, the future still points to nuclear. More major demand nodes suggest that there will still be a significant place for it within the power systems of the future. Its low carbon characteristic is an additional recommendation but not the driving force. The perception that the customer must pay a much higher electricity bill because more nuclear power is needed to avert global warming is a looming PR disaster for the industry. This is unfortunately where the UK nuclear programme seems to be heading.

There is still a space for nuclear power within energy systems of this century but it risks becoming a technology mainly of the 20th. Next month’s article will explain the paradigm shift needed to escape the fear that has blighted nuclear power since the 1950s. Overcoming this remains the vital challenge facing nuclear power today.