Nuclear new build – where does it stand today? 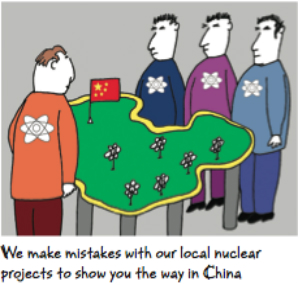 Countries around the world are embracing new reactor construction, but as Steve Kidd explains more is needed if nuclear power is to play a role in meeting future energy needs.

Last month’s article looked at 2017 and summarised nuclear power’s trajectory in an era where environmental concerns have come sharply to the fore. For nuclear to achieve its part in meeting this century’s energy needs, reactors currently in service must achieve long extensions to their operating lives. Substantial new build programmes are also needed. If nuclear is to reach 1000 or 2000 large units in service (compared with today’s 400 or so), it is clear that new build is the most important element.

On the face of it, things are better than they were 10-15 years ago. The World Nuclear Association records 57 reactors as being under construction around the world, compared with only half of this at that time. Some of these are long delayed and may struggle ever to be completed, but the general trend is clear. It may not be the “nuclear renaissance”, but at least it is a sign that some countries are embracing new build. China, with 20 units under construction, is the most important, but Russia with seven and India with six are other huge nations with growth plans. The hope for the industry is that these three programmes get bigger and the trend spreads to many more countries.

Given average construction times of 6-8 years, around eight reactors per year will be commissioned over the next few years, but this needs to rise to 20-30 per year if nuclear is to be a serious player in the world’s energy future.

The problem is that many things seem to be moving in the opposite direction. Further new build has mostly disappeared in important nuclear countries such as the USA and South Korea. In others with smaller programmes, such as Brazil and South Africa, previously ambitious plans have stalled. There are also now clear signs of a slowdown in construction plans in China, Russia and India. Apart from a few countries where Russian and Chinese vendors are active, the number of emerging nuclear countries remains very limited. Finally, the financial problems experienced by reactor vendors Westinghouse and Areva suggest major problems in the business models adopted.

Problems from USA and BRICS

The USA has naturally provided a focus for much of the comment on the prospects for nuclear new build. The bankruptcy of Westinghouse in March 2017 was largely caused by its decision to assume full control of two AP1000 projects in South Carolina and Georgia. It took over its project partner, CB&I Stone & Webster, to rescue the over-budget and behind-schedule projects. Westinghouse’s parent company Toshiba faced severe financial problems and has not surprisingly backed away from new nuclear projects completely, including the NuGen project at Moorside in the United Kingdom. The investors in the VC Summer project in South Carolina have dropped the project entirely, but the Vogtle project in Georgia is still going ahead, fortified by further subsidies from the federal government and local ratepayers.

Although rotten project management has undoubtedly been a significant factor behind Westinghouse’s problems, the wider issue in the USA is cheap natural gas. Switching from coal generation to gas will do less to avert carbon emissions than would a switch to nuclear, but the better economics of gas plants is obvious. Other US developers have been dropping their nuclear projects: all that remains are options, for if and when the economic case for nuclear power improves.
The problem for new-build in South Korea is political. Responding to widespread public concerns after Fukushima, and a 2013 nuclear safety scandal, the new government has decided to phase out nuclear. It will be costly, as switching to a combination of renewables and gas will be more expensive than continuing with nuclear new build. The three units under construction will be completed, but they will be the last, unless something fundamental changes.

Among countries with smaller nuclear programmes, only Argentina seems set to expand. Atucha 3 is under construction, and there is a good chance of more units in partnership with China National Nuclear Corporation (CNNC) of China. Elsewhere, for example, Brazil, the Czech Republic, Romania and South Africa, there has been a lot of talk but little action. A mixture of adverse political factors and the difficulties of financing large and risky projects provide the explanation.

The clue that there is a problem with the Chinese nuclear programme is that Beijing has not granted final approvals to any new nuclear projects since the end of 2015. It may just be a pause, as planners wait to see how the long-delayed AP1000 project at Sanmen and the first EPR at Taishan operate, but the delay in approving inland nuclear plants, until 2020 at the earliest, is also significant. At best, China’s long-term nuclear capacity expansion plans are uncertain (see NEI August 2017, pp. 10-11, ‘Nuclear in China – why the slowdown?’).

In Russia, the government has halved the number of new plants planned by 2030, from 22 reactors (totalling 26GWe) to just 11 (totalling 12GWe). This has been a result of readjusted demand projections, but another factor is the cost. With pressure on oil prices, Moscow’s coffers are limited, and there is a pressing need to finance the planned foreign new-build programme.

India too has pared back its nuclear growth plans in favour of concentrating on its domestic technology. In theory plans for a switch to light water reactors in collaboration with foreign vendors remain in place, but only the collaboration with Rosatom of Russia for further VVER units can be regarded as active. The other international projects face challenges in cost, financing and local nuclear liability laws, as well as competition from renewable and fossil generation.

UK: standing out from the crowd

The United Kingdom stands out as a country with active nuclear new build. It can be seen as a special case but one in which nuclear advocates see some hope for the future. As all but one of the UK’s current 15 operating reactors are likely to be shut down by the early 2030s, it is necessary to replace them with new capacity if the nuclear share of electricity generated (about 20%) is to be maintained, or increased. This is the government’s intention, and it makes more sense than Germany’s attempt to achieve environmental satisfaction via renewables alone. The UK has hit on a market structure that seems to guarantee operational profits sufficient to encourage utilities and other nuclear developers to take on new build construction risk. The EDF’s EPR project at Hinkley Point C has inched forward, acquiring a Chinese strategic equity partner along the way, but there remain doubts whether companies with smaller market capitalisation, such as Japan’s Hitachi, will be able to take advantage of the UK’s innovative market structure. Partnerships with state-owned enterprises will probably be the answer.

The problem with countries hoping to launch their first nuclear power programmes is that they lack a mature legal, political and regulatory infrastructure tailored to the needs of nuclear developers. Unless foreign countries pay for the entire project, it is more and more difficult to see a realistic path towards reactors in poorer and less developed countries. Russian projects in Belarus and Bangladesh and probably Egypt are following this national vendor-financed model (and so are Chinese reactors in Pakistan). Lots of countries in Africa, Southeast Asia and Latin America have signed memoranda of understanding with Chinese and Russian vendors and hosted International Atomic Energy Agency peer reviews to help build a nuclear infrastructure, but they are far from launching projects. Vietnam got close, but in November 2016 it axed its new build plans. Power demand projections were found to be too high, and natural gas and renewables were more attractive than nuclear power.

The most notable shift in nuclear new build over recent years has been the dominance of state-owned utilities and reactor manufacturers in Russia and China. With both governments eager and ready to use their domestic nuclear power industries as an arm of foreign policy, reactor projects will be driven by geopolitical strategy. This is better than nothing, as far as the global nuclear industry is concerned, but other expansion models seem almost dead.

The corollary to the emerging dominance of Russian and Chinese vendors is the collapse of long-established reactor vendors in the West and East Asia. Areva and Westinghouse suffered from committing to turnkey contracts. Hitachi and Mitsubishi Heavy Industries (MHI) are still active in the utility-vendor model for nuclear new build, but it is a struggle. Hitachi is using its own finance for the ABWR at Wylfa Newydd in Wales in the hopes of attracting a big equity stake. MHI is doing the same thing with the Sinop project in Turkey.

Other historical vendors are on the sidelines. GE-Hitachi has refused to take on any risk, first-of-a-kind or otherwise, in its efforts to sell its Economic Simplified Boiling Water Reactor (ESBWR). Canada’s SNC-Lavalin, which several years ago purchased Candu Energy (formerly AECL) is basically now a technology subcontractor. Vendors seek to restrict their scope in new build to supplying reactor technology and procuring nuclear island components.

It is not, however, all plain sailing in the state-owned sector. Chinese companies have found themselves competing with each other for foreign contracts and are being encouraged to merge. Korea Electric Power Corporation (Kepco) will undoubtedly face headwinds in its desire to become an international vendor. With a slow nuclear phase-out, it will have the problem that undermines Japanese, French and US reactor vendors: struggling to sell reactors abroad that they are not able to build domestically.

About the author: Steve Kidd is an Independent nuclear consultant and economist with East Cliff Consulting