Nuclear in China - now back on track? 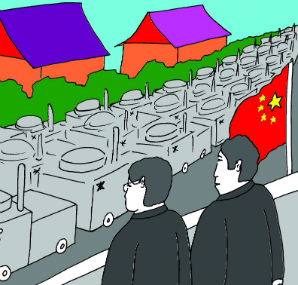 In the immediate aftermath of the Fukushima accident in March 2011, there was a huge amount of uncertainty about the Chinese reaction. In the few years leading up to Fukushima, China's reactor programme had expanded dramatically; 27 units were under construction by 2011. Forecasts of the amount of Chinese nuclear generating capacity by 2020 were as high as 86 GWe, a fantastic rate of growth given an installed base of only 10 GWe at the time of Fukushima. The immediate response of the Chinese authorities was essentially twofold: to order "stress tests" on those units operating and under construction, and to impose a moratorium on issuing new construction permits.

[Cartoon: The Unit by Alexey Kovynev]

The stress tests gave the 13 reactors in operation and those under construction essentially a clean bill of health, subject to some necessary actions. They have carried on operating normally while construction has continued very much on schedule at the other 27 units. Indeed, three of these (Ling Ao 4, Qinshan 2-4 and Ningde 1) have entered commercial operation in the period since Fukushima, bringing Chinese nuclear capacity up to

13 GWe from 16 reactors. The moratorium on new approvals, however, lasted rather longer than many people expected and was only removed in November 2012. In order to understand what this means for the future of nuclear in China going forward, it is important to understand some important background issues.

First, it is only comparatively recently that nuclear has had the support of the Chinese central government in Beijing, represented by the State Council (effectively the Chinese cabinet). In successive national energy plans up to 2005, nuclear lost out to hydroelectricity projects (and the rapid expansion of coal-fired generation). Nuclear was regarded as essentially a niche, rather than mass, generation technology, mainly applicable in a few coastal locations where economic development was already occurring. Chinese economic plans seek to spread development to the much poorer inland provinces and hydro was regarded as much more suitable for this, given the location of the available sites. Several of the previous generation of Chinese leaders were also hydro engineers, hence the instigation of huge projects such as the Three Gorges dam, with 18 GWe of generating capacity alone.

Another important point to note is that political power in China is not as firmly centralised as is often thought. Although it is by no means a federal system, the provinces are quite powerful and certainly have a degree of autonomy from Beijing. It is apparent that by 2005 many of them had noticed the economic development surrounding nuclear projects and become somewhat envious; they had also begun to appreciate some of the other advantages of nuclear, including its environmental benefits. Within the confines of a one-party state, this was made known in Beijing through the National People's Congress and through other means. Nuclear power was also increasingly favoured by central state planners, who by then had become concerned by the dirty air in China's cities and also by the difficulties of huge hydro projects (for example, the logistics of having to displace large numbers of people, and the wider environmental issues).

The answer was to go for big nuclear and renewable energy programmes in order to begin to temper the rise in coal-fired generation, the source of much of the environmental problems at the time. (The dramatic rise in the number of vehicles on the road is now just as problematic.) It is notable that the pro-nuclear and renewables policy was not targeted specifically at curbing carbon emissions, but rather to help meet cities' clean air targets. From the Chinese standpoint, man-made climate change has been caused by the developed countries, so the OECD countries must take prime responsibility.

Plans were therefore hatched to build reactors on a large number of sites in China beyond the established nuclear bases at Daya Bay in Guangdong site and Qinshan in Zhejiang, and then construction began at several of these. The main Chinese nuclear companies, the Chinese National Nuclear Corporation (CNNC) and the Chinese Guangdong Nuclear group (CGN) developed rapidly, gaining experience of further overseas reactor technologies whilst simultaneously developing their own design abilities. They were joined by the State Nuclear Power Technology Corporation (SNPTC). Initially, it was the key technology transfer organisation for the Westinghouse AP1000 design, but ultimately it is likely to become the most important Chinese reactor vendor, with its own evolutionary designs. In addition, more Chinese power companies, such as Datang and Huaneng, became investors in nuclear plants, joining the China Power Investment Corporation (CPI), which already had minority stakes in operating reactors. The reactor supply chain also developed rapidly to achieve a higher level of local content with any future reactors.

Things were therefore developing very rapidly at the time of the Fukushima accident; perhaps too rapidly. Some concerns were becoming quite openly expressed about the sheer pace of the expansion, whether it be about the ability of the regulators to keep up standards, the possible seismic risks at some of the inland sites, or the requirement to train huge numbers of young people to run the programme. The official reaction to the accident has obviated much of these concerns. That such a major accident could happen in a technologically-advanced country like Japan clearly frightened the authorities in Beijing greatly. Their considered reaction has definitely provided the opportunity for a notable and welcome "pause for breath" in China's nuclear programme. It can also be seen as an attempt by the central planners to assert their authority over the Chinese provinces, many of whom were pushing hard for projects in their locality (with more diversified economic development clearly in mind). In particular, projects at inland sites will not be authorised for some time (owing to the alleged seismic risks), while only reactors which meet Generation III standards will now be allowed.

The limitation to coastal sites will have some impact on the future AP1000 programme in China, as the next three sites for this (beyond Sanmen and Haiyang) were all inland, and had already reached an advanced stage of preliminary work. They will no doubt get approval eventually - the current situation should be seen as merely a postponement. Indeed, the seismic risk could be seen as little more than an excuse for slowing things down. With regard to reactor technology, most of the reactors currently under construction are CPR1000s, the Chinese development of the first-generation PWRs installed throughout France in the 1970s and 1980s. This is regarded as a Generation II+ model and somewhat below Generation III standards. However, CGN are now working on an ACPR1000 which will arguably reach the required standard for future approvals, while CNNC has its own ACP1000 model, which should also fit the bill. The Chinese will therefore not be dependent on foreign reactor models such as the EPR, AP1000 or the Russian VVER (with their relatively high percentage of foreign content). SNPTC is also rapidly developing a CAP1400 based on the AP1000 (for which it will have intellectual property rights) and is already planning initial units in China and looking at the export possibilities.

Despite the prolonged approval moratorium, there is a huge amount happening in nuclear in China, even though the likely nuclear capacity level for 2020 is now "only" about 58 GWe. Four additional units (Fuqing 4, Shidaowan 1, Tianwan 3 and Yangjiang 4) have been approved for construction since it was lifted, meaning that there are now 29 units under construction. This is out of a world total of 68, so the Chinese programme remains huge in world terms. Reaching 58 GWe by 2020 implies that all the units now under construction will be online by 2017 (adding 30 GWe to today's 13 GWe), that further approvals at the rate of five per year will occur by end-2015, and that they should be operating by 2020. This still may be an ambitious target, but is reasonable given recent Chinese construction experience. It is likely that the initial AP1000s and the twin EPRs under construction at Taishan may be subject to some delays relative to the announced start-up dates, but these are not regarded as substantial.

Within the fuel cycle, China is developing its uranium resources as best it can, but these are neither extensive nor high-grade. Hence annual production will likely only rise slowly from the current level of about 1300 tU per annum. China will, however, need more than 10,000 tU per annum to fuel its reactors by 2020, and has already built up substantial inventories of uranium by buying under long-term contracts and in the spot market over recent years. It is now supplementing this inventory by beginning to invest in uranium projects around the world; CGN's acquisition of Extract Resources and its Husab project in Namibia is no doubt the first of many. Much less is known of China's plans for conversion and enrichment, but it is generally assumed that local capacity will be gradually expanded to meet local requirements. This will need supplementing with imports (particularly from Russia) in the shorter term. And in fuel fabrication, local capacity is being expanded to produce fuel for all the reactor types to be operated in China.

Given the high dependence on imported uranium, the Chinese are attracted to a reprocessing strategy to extract as much value as they can from what they must buy overseas, and are centralising used fuel storage at a site in remote Gansu Province in western China with this in mind. They also have an agreement with AREVA to look into establishing a large reprocessing plant, but its timescale may not lead to commissioning until the mid-2020s.

Finally, China is also looking to the future by investing in advanced reactors. It has had a small High Temperature Gas Cooled Reactor (HTGR) operating for several years. It now has a 210 MW prototype unit under construction at Shidaowan, partly financed by Huaneng. With the abandonment of the PBMR project in South Africa, China can now be regarded as the world leader in this area. It is also involved in fast neutron reactor development and has a 65MWt unit in operation, and has plans for larger units with both local and Russian technology.

To conclude, China is clearly now the centre of nuclear development throughout the world, not just in terms of its reactor programme but also in supply chain investments and in technical development. The more optimistic forecasts for 2020 were always somewhat questionable, so the removal of the 'froth' in the programme is very welcome. What happens post-2020 is still open to debate -- if the current established programme is regarded as hugely successful, it could accelerate from about five reactors a year to ten or beyond. The huge Chinese renewables programme does not provide the intensive power source that the growing cities really need and the local planners are not unaware of this. Given the size of China, with individual provinces of populations in excess of the largest European countries, accommodating several hundred reactors should not necessarily be a problem, and the environmental arguments for doing so are unlikely to go away.

Steve Kidd is an independent nuclear consultant and economist, following 17 years of work in senior positions at the World Nuclear Association and its predecessor organisation, the Uranium Institute.