Nuclear and its role in climate change 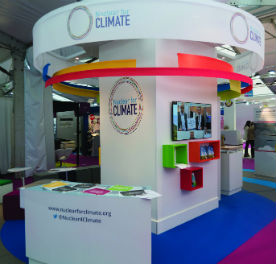 My impression of what COP 21 means, both for the global environment and for nuclear energy is at odds with last month's opinion piece "After COP-21- where does nuclear stand?"

I was at the Paris meeting for the whole 13 days of the conference, with access to the restricted "Blue Zone" where the negotiations took place. I've been following the COP negotiations for more than 15 years and this has let me see the progression of the meetings, both in terms of how nuclear energy is treated and how the political debate on climate change has evolved.

What has been achieved with nuclear energy can be seen by contrasting the Paris meeting of 2015 with the last major climate change agreement, the Kyoto Protocol. Under the Kyoto Protocol, nuclear energy was singled out as being excluded from the Kyoto Mechanisms, the only mitigation technology to be treated that way. The COP 6 meeting that introduced the exclusion was full of anti-nuclear protestors. At times it seemed more like an anti-nuclear rally than a climate change conference.

Fast forward to 2015; the Paris Agreement makes one brief reference to renewables but otherwise does not specify particular technologies. At COP 21 countries decided what the maximum temperature increase due to climate change should be. How they are going to deliver the emissions reductions needed to meet those targets is down to their own national policies.

Nuclear energy was among a wide range of low carbon technologies that will receive support under two new initiatives launched at the start COP 21. The first, Mission Innovation, is a commitment by 20 governments, which together are responsible for more than 75% of the world's carbon dioxide emissions from electricity, to double the amount of R&D investment in clean energy over the next five years.

The second initiative, the Breakthrough Energy Coalition, has been set up by a group of more than twenty billionaires to provide private sector funds for clean energy research. The Coalition is led by Bill Gates, who has already made significant investments in advanced nuclear technologies.

At COP 21 more than 160 national nuclear societies joined together under the banner of Nuclear for Climate to make our case. I took my turn at the Nuclear for Climate stand and was surprised at the high level of interest shown by delegates. Many, not familiar with nuclear energy, wanted to know more.

There were also a number of high profile speeches and press conferences. For example, former NASA head James Hansen led a quartet of climatologists in making the case for nuclear energy as a leading part of a future low-carbon energy system.

For sure, there were also some notable absent supportive voices as well as antagonists. The French hosts, for example, appeared to forget that they had the low carbon electricity generation mix other nations were supposed to be striving for, thanks largely to nuclear energy. Like celebrities doing charity work, it seems many governments like to use nuclear energy, but don't want to talk about it.

But it is misleading to say that nearly all of the INDC submissions exclude nuclear energy from their plans to reduce carbon emissions. They may not specifically mention nuclear energy, but neither do they list other technologies. Take the three key players mentioned in the original opinion piece - China, the USA and the European Union. China lists the contribution of nuclear energy alongside wind, solar and hydro. The US and the EU, on the other hand, don't mention any specific form of electricity generation. That they don't mention renewables either doesn't mean that they have been excluded.

A significant role for nuclear energy is also set out in scenarios devised by organisations such as the International Energy Agency. Those scenarios project a more than doubling of global nuclear capacity to over 900GWe by 2050. That would see nuclear generate around 17% of the world's electricity. We are not on track to achieve this, and I'd agree that the regulatory regime is one issue that needs to be addressed, but it is only part of what would need to be done.

Debate may continue on linear no threshold (LNT) theory, but to say that nuclear energy's "brand image" depends on consigning it to history is a mistake. The risks associated with nuclear energy - radiological or otherwise - are much smaller than other forms of power generation, even if one takes LNT at face value. Whatever concerns some people have about nuclear energy, whatever causes governments and experts have to perceive that promotion of renewables is more attractive than nuclear power plants, do not arise from a rational assessment of the minuscule risk estimated by LNT for most people's exposure.

Whether or not LNT is disproved by the mainstream, opponents of nuclear energy will find ghosts in the data to feed any uncertainty people may have. A new safety paradigm is needed where the safety of nuclear energy is understood in the context of other forms of generation and other elements of our day-to-day life.

Regulatory reform is needed, but it must face the reality that, even with assumptions of LNT, the regulatory requirements for nuclear energy are far more onerous than those in place for other forms of generation, or other industries. If such reforms are predicated on establishing a consensus against LNT then we will wait decades for the debate to conclude. A more rational regulatory regime is needed now, and can be further refined should more evidence on low level radiation emerge in the future.

The third requirement for nuclear energy to deliver on its potential is action to allow nuclear to compete fairly in deregulated electricity markets. Currently nuclear has to compete with some forms of generation whose environmental impacts are not being costed and other forms of generation that are being selectively subsidised. In some countries it also has to deal with politically motivated taxes that are little more than a stealth phase-out policy. There should also be recognition of the consistency of nuclear generation, and the low systems costs required to ensure reliable supplies.

Nuclear energy's future will not depend on just a debate of LNT, neither will it depend solely on recognition of its low carbon benefits, there must be a much broader approach. But it is without doubt that unless nuclear energy can play its full role the international agreement reached in Paris will be far harder to achieve.