Needs must when the devil drives 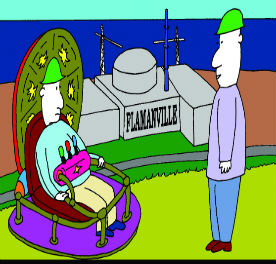 IT SAYS A LOT ABOUT today’s nuclear debate that stating the technology’s main benefits caused former US Energy Secretary Rick Perry to be called ‘messianic’ in the media.

Nuclear power helps “vulnerable nations take control of their destinies,” he said at the EU-US High-Level Forum on small modular reactors in October, pointing out that “energy security also bolsters national security”. He added that countries with nuclear power, “can’t be controlled by other countries wielding energy as a geopolitical weapon” although, of course, a country would need quite a lot of nuclear power before that was really true.

He pointed out that many of the 126 nuclear reactors in the European Union will continue to operate and make a significant contribution for decades to come. It is, after all, the bloc’s biggest domestic source of energy — and counted as domestic because the security of its fuel supply is so good. “Given the global public pressure to reduce emissions,” he said, “It is therefore time to bring small modular reactors under the spotlight.” Cautious support for nuclear from an EU grandee!

Perry, however, imagined nuclear not as something you might need only if you get really desperate, but as something he’d like to see “delivering power everywhere, bringing light to even the smallest villages and faraway hamlets dotting the globe.” Okay, so perhaps journalists did have a point in calling him messianic. It’s pretty unlikely that nuclear could outpace drop-in solar and storage units for African villages, but if you head out into the tundra and try setting up an airport and mining operation Perry begins to have a point.

If desperate times call for desperate measures, it seems that it is not only Can~ete who feels things may be headed that way. In parallel with the upsurge in grassroots climate activism (Fridays for Future and Extinction Rebellion, to name just two major newcomers among many), the last year or so has seen a remarkable turnaround in public opinion in some European countries, as one by one they remember why they built nuclear power plants in the first place.

A year ago, aided by visits from the environmentalist and nuclear advocate Michael Shellenberger and TV comedian Arjen Lubach’s brilliant argument in its favour, opinion polls in the Netherlands showed a 53% majority in favour of nuclear energy. This liberated more politicians to speak objectively about it and the most recent poll, in October, was stunning. It returned a whopping 89% agreement that the country cannot fight climate change without nuclear power, while an incredible 91% said the Netherlands should consider building a fleet of new reactors above and beyond the single unit at Borssele.

Next door in Belgium the folly is sinking in of a phaseout policy that would see seven reactors close in 2025 that today provide half the country’s electricity. Three years ago the International Energy Agency (IEA) pointed out to the Belgian government that its phaseout policy “does not help Belgium meet any of its energy policy goals”, which is quite a sick burn. For a long time 2025 probably sounded like a date in the distant future, but we are nearly at the end of 2019 and it cannot be hidden any longer that replacing nuclear means going large on gas — and subsidising it too, because even fossil-happy companies know their days are numbered.

Now the public are figuring this out. In October a poll found that 83% of Belgians support operation of their nuclear plants and 46% support keeping them after 2025. The latter figure rises to 70% in the context of keeping emissions low. It’s an amazing change, given that only 30% supported operation after 2025 two years ago. The way is opening for the phase-out to be scrapped.

Last — but not least — of the good news in this trend has to be the beginnings of a turn-around in French policy. While nothing is decided, it surely counts for a lot that environment minister Elisabeth Borne and finance minister Bruno Le Maire told EDF chairman Jean Bernard Le´vy to prepare to build six new reactors at three sites.

The French government wants to decide in 2022 whether to go ahead with the new fleet, based on a situational assessment finalised in the middle of 2021. It wants EDF to provide a set of action plans for the industry to reach the required level to execute the mission by March 2020.

This is going back to what President Nicolas Sarkozy intended — starting work on new EPR at Penly quickly after the start-up of Flamanville 3 — except delayed by 10 years.

Is it going to be different this time around? It had better be, because it is hard to imagine the industry getting another chance.

Like geologic time, a decade is the blink of an eye in the nuclear industry. Yet it has been enough to identify where things went wrong the first time around.

The vendors have to ensure plant designs are complete before starting construction, and we now have two EPRs up and running as well as four under construction. Western governments have to get over their phobia of financially supporting construction — the 9% rate of return required for EDF and CGN to take on the risks of building Hinkley Point C cannot be repeated — so I’m glad to see the Regulated Asset Base model has been well received by industry economists. And a great kicker for value is to build multiple units on the same site. In the UK at least, multiple units at a small number of established sites is the only possible way to go.

After years of uncertainty, delays, disappointment and some lost projects in the UK, there is now an encouraging feeling coming from EDF Energy executives that they are going to get it right. I’m told that lessons learned at Hinkley Point C really are being transferred to Sizewell C — along with the actual people and their experience. Sizewell should not see the tricky ground conditions that slowed down the early work on Hinkley, but from the ground up the two plants are going to be exact copies, maximising learning and the efficient use of teams, and equipment.

This is great. We are going to need a production line of these things. Recent reports on the UK’s legally binding goal of reaching net-zero greenhouse gas emissions by 2050 indicate the country will need some 60-100GWe of new nuclear capacity. The scale of that ambition means starting work on a new reactor every year until that 2050 deadline, leaving only a couple of years for the government and the public to get their heads around that fact and prepare to get going.

Pressure is building for increasingly radical action. Industry has the chance to offer something proven to work. And there is just about enough time to get it done.

The grassroots campaigns of XR and Greta Thunberg are accused of being apocalyptic. After years of media outlets working to raise awareness, a lot of people now genuinely fear that ‘climate breakdown’ will take place in their lifetimes, or their children’s. Some people are beginning to freak out. But when you feel as though you are facing war, hunger, pestilence and death, perhaps the measures currently seen as messianic will soon be thought of as merely methodical.

Cartoon by Alexey Koveynev: “If you don’t correct the mistakes from ten years ago we will never startup this plant!”