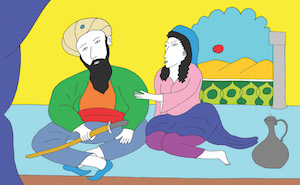 Countries looking to invest heavily in new nuclear capacity – especially those in Europe — also need to consider how they will manage used nuclear fuel. Jeremy Gordon asks whether it should be managed by industry or government

The importance of nuclear energy is as clear as ever, as is the urgent need for new build. But nuclear’s return has reinvigorated the need for disposal of used nuclear fuel, and that situation is still muddled.

["And what Sultan did with the spent nuclear fuel...  I will tell you the next night"  Illustration copyright Alexy Kovynev]

Like most other things concerning nuclear this is more urgent in Europe which, outside of Russia, is feeling a collective need to catch up. Having secured scientific recognition that nuclear power is sustainable, as well as the political acceptance of that fact at the EU level in the Taxonomy, European countries are now concerned with the strings that Brussels attached to sustainable finance. You guessed it — used fuel disposal. This process would more likely be sped up by governments letting go of control than by them making new rules.

The Taxonomy draft released at the end of last year said that pro-nuclear countries in the EU that want to leverage nuclear’s sustainable status for investments will have to show either a plan to have a repository in operation by 2050 or substantial progress towards that goal. That second part is vague. What constitutes substantial progress? Is it enough to have a designated site, or a defined process to select a site? How about having a licence application in progress? The US Yucca Mountain project shows that a repository can have regulatory approval, yet still not be built.

The question may be urgent for countries in Eastern and central Europe, which are looking to invest in a big way. The head of Czech utility CEZ, Daniel Beneš, was buoyed by the Taxonomy and said the company is looking to expand its new-build programme from just one new unit at Dukovany. He wants to add a pair of units at Temelin and then another new unit at Dukovany. With all that done and the older Dukovany units retired, Czech capacity in 2050 could be about 50% greater than today’s and it could be providing around half of the country’s electricity.

With so much at investment at stake it is natural for the Czech industry to be wondering whether it can satisfy the 2050 repository criteria. While the waste disposal agency SURAO thinks it could accelerate site selection to meet its interpretation of the Taxonomy rule, the environment minister Anna Hubackova laughed that off as “a fiction”.

On the other hand, perhaps SURAO’s current status of having four candidate sites and being in the middle of a process to select between them is enough now? Or maybe it will be enough soon, given some political leverage in Brussels?

Nobody wants these matters to be decided on a case-by-case basis with Austria challenging every decision in court.

Whichever way you look at it there is still a lot for the pro- and anti-nuclear sides to play for as countries make their comments to secure a final, final, final version of the Taxonomy.

While I am glad to see used fuel disposal getting some impetus, the arbitrary nature of the 2050 date troubles me. It is not a great idea to pick an arbitrary date in the future to put pressure on a complex social and technical task like used fuel disposal. It is widely acknowledged that best practice is to proceed at the pace that the local communities need.

What role should governments have in radioactive waste disposal?

A second concern is that this reinforces the role of governments in setting the disposal agenda. As I have noted in previous columns, it is the waste disposal programmes managed by industry, not by governments, that are leading the pack.

The prime example is Posiva of Finland — or more correctly Posiva, as funded by Finland’s nuclear operators and left alone to get on with it by Finland. It has secured the support of a community, found a suitable site, excavated a repository and submitted an application to operate the facility from 2024.

Over in Switzerland, the waste disposal organisation Nagra is a cooperative of nuclear utilities as well as the Zwilag interim storage facility and the government. It has just announced that the projected cost of its used fuel disposal has come down slightly, while it prepares to submit a licence application this year. The progress being made by these industry-driven disposal organisations completely flips the script of nuclear waste as a never-ending problem.

As if to prove that it all goes wrong once politicians are involved, Sweden’s successful used fuel management programme is managed by SKB on behalf of the waste owners in industry. However, SKB hit problems when political approval was needed to expand its CLAB interim storage facility. Without some extra space at CLAB there was not going to be a route for discharged used fuel and this impasse dragged on long enough that it threatened to affect power generation, potentially shortening the lives of reactors at the Forsmark nuclear power plant.

Forcing a 2050 timeframe on the issue is also unfair to small countries which are supposed to match the waste disposal responsibilities of larger ones that have more than 100 times more used fuel. Perhaps a positive benefit of this will be increased cooperation between these nations to share technology and even to share a repository system.

Lessons from the USA

The US gives us the ultimate example of top-down specification backfiring. The imposition of a 1998 deadline to operate a federal disposal facility meant paying for all the utility management costs when that was missed. It made the cost management less efficient and more expensive by spreading it out across all kinds of sites and jurisdictions. Then the unilateral selection of Yucca Mountain cemented political opposition which eventually overturned the whole programme.

Starting again, the USA’s disposal programme is to be revitalised, with the Department of Energy’s call for information about interim storage sites for all the waste held at power plant sites in dry casks. The goal is to set up one or more interim storage sites where all these casks can be taken and kept under federal control. There is no arbitrary deadline, thankfully.

Obviously nobody except consultants have been happy about US used fuel being stored at so many sites. It is not what the nuclear industry would call a long-term solution, because it would only be okay for a century or two. But given that the used fuel is being managed by licensed specialists and it is safe and secure, any moves to mess with the system have to be well justified.

The benefits of putting all the country’s used fuel in the hands of the federal government at a central facility are debatable in terms of security and safety. The moral aspect too is debatable. It would be perfectly reasonable and fair for the people who profited from using the fuel to be responsible for its disposal, especially now that the world knows that non-political industry-driven organisations can discharge this duty better than governments. It is a shame that engineering giants and used fuel specialists of the US are not allowed to simply create their own repository projects. Think what good exports those technologies and services would make and how much more quickly the world as a whole would get the job done.

Both the EU and the US would have done better to make the waste producers responsible for disposal and ring fence funding in a single-purpose independent body to execute the programme. They could ensure the right of governments to resume control if it became necessary. Of course, politicians don’t often legislate to have less power, but if they use their power to force the disposal issue to an arbitrary deadline it brings a risk of backfire through political fighting. That would mean further postponement of the disposal route we all would like to see in place.