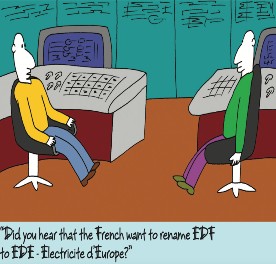 France remains committed to reducing its nuclear share, but for President Emmanuel Macron the strategic importance of the technology is reaching a new high, writes Jeremy Gordon

THERE WERE A LOT OF very welcome soundbites in French President Emmanuel Macron’s speech to the workers of Framatome’s Le Cruesot forge on 8 December and a bullish and proud recognition of the advantages France enjoys, thanks to its previous commitments to nuclear.

Macron began by outlining three convictions he holds about the sector. The first was, “Our energy and ecological future depends on nuclear.” This stamp of approval was highlighted in official announcements and broadly reported, as was Macron’s explanation that the Intergovernmental Panel on Climate Change considers that nuclear produces 4 grammes of CO2 per kWh, whereas coal produces up to 1000g/kWh. It is a sad state of affairs that this needs to be constantly underlined in France, where a significant number of people think nuclear has been causing climate change all this time.

Notwithstanding that the Energy Transition law mandates that nuclear energy be cut, from a historic peak of about 75% to supply 50% of electricity by 2035, and that he has already overseen closures at Fessenheim, Macron continued to stand up for nuclear’s benefits.

His second conviction was the positive economic and industrial impact of the nuclear industry, which in France employs around 3000 companies and 220,000 people. “Rare are the sectors which are anchored everywhere on the territory, with know-how that is exported all over the world and a trade surplus of €7 billion per year,” he proclaimed. Instead of paying to import billions of tonnes of fossil fuels, France exports high value nuclear know- how and technology. “Rare are the sectors which are thus at the forefront with such a flagship export capability,” he continued.

Lastly, he said, “Rare are the sectors that offer so many perspectives to our youth,” referring to 5000 new jobs that will be created during 2021, despite the economic impact of COVID-19.

But if the sector is set to be cut by a third, can it really offer that many opportunities? There would have been layoffs if construction work at Hinkley Point in the UK had not been secured.

The opportunities could come from new build, for which Macron seemed to be preparing the public. While he agreed that France should not be too dependent on any one source of energy, it is not clear that a system depending on high levels of intermittent renewables would be a good thing either. A study to clarify this has been commissioned from the International Energy Agency and will be presented early next year. At the same time Macron is expecting to receive a study on the construction of new reactors within months. “Based on this document, which will be shared with all French people,” he said, France can choose “knowingly and in perfect transparency” whether to build new reactors.

I cannot say I have heard much confidence around this decision in industry circles. However, the impression Macron gave was of a man who wants to say yes and is preparing the ground to do so if industry can give him good enough reasons. He said that his deadline for a decision was 2023, when Flamanville 3 enters service, and surely he will not want it to end up as an issue in the run up to the next presidential election in 2022.

Interest has been surging in hydrogen and Macron was keen to link nuclear to France’s goals there. Powered by nuclear, a hydrogen production plant can make ‘green hydrogen’, which even the European Commission has acknowledged would be ‘low carbon’, alongside that produced from wind and solar electricity. The added advantage for France is that its whole grid is low carbon, which means hydrogen plants can be sited near to demand, eliminating the cost and difficulty of transport. I’ve argued before that nuclear urgently needs to diversify its products away from electricity alone and low carbon hydrogen is surely an open goal for France.

Another strand in the speech which did not fit with an ambition to scale back the industry was its inclusion in the France Relance plan to recover from COVID-19. The network of 3000 French nuclear companies is an “economic force” that has to be consolidated. It will receive €100 million “to help the more fragile actors regroup” plus €70 million for modernisation and to boost competitiveness. Part of this will be a university of nuclear for those with the ability to reach the highest levels in nuclear science and technology, to enable learning and training throughout life. “It is important that the young people who today come out of training clearly hear the message that the sector hires engineers, technicians and researchers.” Again, not the kind of thing you do for a sector you are putting out to pasture.

Macron went as far as to pin a flag on the SMR development project led by EDF, calling it “le projet SMR Franc¸ais”. Small reactors are “full of promise” he said, mentioning the budget of €50 million over two years allocated to it. This is not new money and frankly is not enough to do very much, but Macron hinted that his real ambitions could be a lot larger. “We must quickly catch up and consider all possible partnership options,” he said. Perhaps France’s real plan is not really to bring forward a technology of its own but to select an existing one to ally with or to purchase?

The civil and military nuclear sectors are separate for good reasons, and nobody likes to cross the streams between the two. However, it is a fact that both have been effective routes to security and independence for France. Macron made his appreciation very clear to Le Creusot workers, who make parts for both civil and naval reactors.

Many nuclear advocates have been concerned about the future of nuclear in the European Union, especially now the UK has left. Brexit meant there would be one less voice in the EU to speak up for nuclear and France now stands alone as the only large nuclear power country left in the EU. France has rarely rocked the European boat to protect its nuclear sector, either with its own diplomatic voice or through the actions of its state controlled power giant EDF.

In large part thanks to French nuclear, Brexit has also gifted France a singular and foundational role in EU defence and foreign policy. Across the European Union’s 27 member states and its 448 million people France is now the major custodian of key nuclear skills and technologies. It is the EU’s only vendor of nuclear reactors, the only operator of nuclear-powered ships and submarines and the only country armed with nuclear weapons. By virtue of the latter capability it is also the EU’s only member state with a permanent seat on the UN Security Council.

Macron made clear that he sees these strategic aspects of nuclear as intertwined. Nuclear plants and naval nuclear reactors both rely on the skills and technologies mastered at Le Creusot. He told workers: “Our strategic future as a great power depends on you,” before announcing that nuclear propulsion was his choice for the aircraft carrier that will replace the Charles de Gaulle in 2038.

France’s nuclear power future must remain uncertain and risky as long as the Energy Transition bill is still law. As Belgium, Germany, Sweden and Taiwan show, anti-nuclear policies might soften and evolve but once a ‘phase out’ is on the books it never goes away. It is only a question of when and where the axe will fall.

For now the strategic value of all France’s nuclear capabilities is increasing tenfold and Macron surely knows that now is not the time to cut them, but to double down on them and drive home their advantage. “Everything that makes France an independent power, listened to, and respected, is based on the nuclear industry,” said Macron at Le Creusot. What the law requires him to close down, Macron seems minded to replace with something better.