Localisation of supply – how can it work? 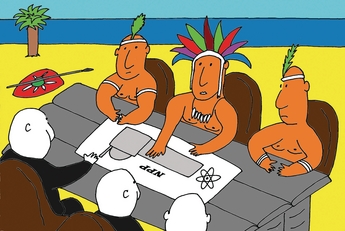 Despite the Fukushima accident, the international market for nuclear energy has continued to open up. According to the International Atomic Energy Agency, some 31 countries are considering, or making active preparations for, the introduction of a nuclear power programme to meet identified energy needs. Of these, between 10 and 25 are expected to have an NPP in operation by 2030. Turkey and the United Arab Emirates have contracted to build NPPs for the first time. Kazakhstan and Lithuania (which shut down their NPPs) plan new nuclear build. The remaining likely new entrants to the nuclear market over this period include Belarus, Egypt, Malaysia, Poland, Saudi Arabia, Thailand and Vietnam.

At the same time, most of the new NPPs in the period to 2030 will be built in the existing nuclear countries, with heavy concentrations in China, India and Russia. With this anticipated level of new-nuclear build, the main vendors and their attendant reactor supply chains are expected to undergo a significant number of changes with a general trend towards internationalisation.

Although nuclear energy is a relatively mature industry, it can be argued that it has not been exposed to international competition to the same extent as some other high-technology sectors. As a result of restructuring there are now a smaller number of internationally recognised reactor models on the market, but the process of vendor consolidation and specialization could go further to leave perhaps a core of around four to six vendors by 2030. Each of these is expected to have a highly-specialised reactor supply chain behind them, hopefully along the lines of the aircraft manufacturing sector today. This is seen as essential for economic reasons. There are a huge number of components within a nuclear reactor and a higher degree of standardization of reactor designs together with cheaper component supply is necessary, in order to bring the capital investment costs of new nuclear projects down to fully competitive levels.

The World Nuclear Association has recently released a new report “The World Nuclear Supply Chain Outlook 2030” as a companion to its biennial reports on the nuclear fuel market. One obvious contrast is that the front end of the nuclear fuel market (that is, uranium mining to fuel fabrication before loading into the reactor) is already a highly-competitive international business. The nuclear supply chain for reactor construction, on the other hand, is still rather more nationally-based and the report describes this and future likely developments in some detail.

The foundation of a competitive global nuclear power market is, nevertheless, clearly under way with the entry of new suppliers and new customers. The availability of nuclear technology is now much less constrained than was the case historically. National barriers to entry have come down in several advanced industrial countries, although there remain some regulatory and technical constraints applying to reactor supply. NPP vendors are traditionally strong in their home countries, so preference for a domestic supplier clearly plays a role in many cases. There are obvious technology barriers to firms that might seek to offer NPPs and the exceptional performance required from suppliers makes it expensive for any company to enter the components market. Nevertheless a competitive international market is emerging with sufficient technology vendors to assure genuine competition and, through the localisation of component manufacture, to develop new specialist suppliers.

From a supply-side perspective the challenge in emerging economies which are candidates for a first reactor (where the demand for power is rising strongly to meet the needs of industry and expanding urban communities) involves finding an appropriate mix of local and international suppliers and the development of the technical capability to manage and finance a programme effectively. The challenge in the mature industrialised economies (where in many cases the focus is on replacing generating capacity with a low carbon alternative) is how to capture the benefits of economies of scale and standardisation. The WNA report suggests that the solution lies in developing an international supply chain that delivers high-quality, reliable and cost-competitive components.

There is no single approach to securing the efficiency and cost benefits that are potentially available; the challenges are complex and inter-related. There are, however a number of key issues which are clearly important. Firstly, there needs to be investment in manufacturing and engineering capacity to minimise bottlenecks and assure availability of nuclear-grade components. Secondly, investment is necessary in business and technical processes that enable companies and organisations to adopt good practice and integrate their activities. Thirdly, we need certification of suppliers to international standards for quality control of manufacturing and construction processes. And finally, the institutional framework between government and industry should be strengthened so that national technical regulation and licensing facilitates international trade and technical exchange.

One important issue that always comes up is the desire of new nuclear countries to achieve a high level of local content in reactor projects. Indeed, this is not just an issue in the new entrants – because of the industrial development and jobs involved, it is also a big concern in countries like the United Kingdom that are now considering new nuclear build (but with a long heritage in the nuclear sector). Reactor design and engineering cannot be procured from local suppliers, but localisation of the supply chain is always an important objective. Yet there is a potential problem with this; localisation could be seen as getting in the way of the need to internationalise the supply chain for economic reasons. Local may mean more expensive and, at the margin, conceivably render a particular project uneconomical.

Credit: The Unit by Alexey Kovynev
"Okay, we'll buy your nuclear power plant, but only if the local content of equipment is at least 75%"Â

We have to recognise that encouraging a high local content in the nuclear supply chain is a potentially important tool for economic development in any country. Nuclear projects are huge investments, even in the developed world, and localisation supports the transfer of technology, and should eventually raise productivity in the host country. It creates employment, especially in professional and skilled occupations, directly and indirectly, as local companies develop their capabilities and relationships with global companies.

Nevertheless, even in mature industrial countries like the France, the UK and the Czech Republic, the proportion of local content in reactor projects is expected to be not more than 50 to 70 percent. British industry now faces a major challenge in upgrading its manufacturing systems to achieve nuclear grade performance, as the lack of new-build since the last NPP was completed in 1995 has significantly eroded capabilities. So it is not just an issue in the new emerging markets.

We know, however, that localisation is far from being a ‘silver bullet’. Those countries that have pursued localisation most vigorously have done so in order to foster self-reliance in design, build and operation. In an increasingly interdependent and international economy there is little economic advantage in locating every possible industry on a national territory. In a global market, as long as there are a number of competing suppliers, there is assurance of security of supply. The existence of competitive pressures internationally also means that prices will be keener. In the 1960s governments in several countries encouraged the formation of competing consortia to provide NPPs, but the collapse in new plant orders resulted in restructuring and consolidation both nationally and internationally. In the USA for example, Westinghouse closed its East Pittsburg electrical equipment works in 1988 (established by George Westinghouse in 1894) and now “buys where we build”. The USA can no longer source all components for an NPP from factories within the country and must import several key components including heavy forgings from abroad.

Specialisation in areas of competitive advantage can be a better business strategy in many markets than trying to be a full-scope supplier. The size of the potential market for each component is critical to obtaining economies of scale. The components and equipment necessary to a nuclear power plant’s conventional island are similar to the scope of requirements found in thermal power plants or other types of electricity generating plant. The vessels and heat exchangers manufactured for the reactor have parallels with those manufactured for the petrochemical industry. The exceptional performance specified in the nuclear industry is similar to that called for in the aerospace and defence industries. Modularisation provides an opportunity for localised assembly of sub-modules in-country. A localisation strategy should therefore be built around local companies, from the ‘bottom up’. In order for the localisation strategy to be sustainable over the long-term, each venture must have a viable business case that looks to sales in the wider marketplace. It is unlikely, however, that the proportion of local content could rise above 30 percent where a nuclear power programme involves only a small number of reactors. This will be the case, initially at least, in countries like the United Arab Emirates. Yet in Saudi Arabia, the nuclear programme may eventually reach 20 or so reactors, offering enhanced opportunities for local supply.

Good international practice in local economic development suggests that a localisation strategy should be built around two axes. Firstly there should be close collaboration between the EPC contractor and the relevant economic development agency and the plant operator on the procurement procedures to be followed. Realistic opportunities for increasing local content can be identified and then followed up by a joint task force, so that requirements can be announced well in advance of tendering, giving local companies the chance to pre-qualify and compete. Secondly, complementary measures are necessary by the economic development agency to promote capacity upgrading among local companies and to help them achieve the necessary certification.

A localisation programme will also require investment in human resources so that the skills and education necessary to support the development of nuclear power are available. The activities of the technology vendors and their contractors will be crucial to furthering the development of an international but integrated supply chain. The procurement policies for spare parts, supplies and maintenance by plant operators are another important factor. Eventually, local suppliers can even consider entering the export market once they are part of a reactor vendor’s approved list of suppliers.

As an example, South Korea has built up an internationally competitive indigenous nuclear power industry from a low base. (The local content of early plants, such as Kori 1-4 begun during the 1970s, ranged from 8% to 29% of equipment. By the early 2000s when Yonggwang 5&6 came online local content had reached 79%.)

Localisation has to be seen therefore in a positive light. If countries are too ambitious and try imposing inefficient local suppliers on a project, this will create severe problems. It is important to secure the cost advantages of international component supply until local industry can rise to the challenge. Then it may even be possible to extend local supply to the bigger reactor components and even consider exporting.