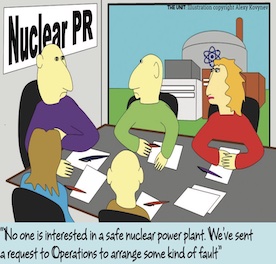 Nuclear has a key role to play in the clean energy transition but its presence at COP27 was surprisingly muted. Jeremy Gordon argues that it’s time nuclear power claimed its rightful place at the clean energy top table and became part of the conversation.

Nuclear has enjoyed the best representation yet during COP27 in Egypt’s Sharm El-Sheik, thanks to the efforts of international organisations, professionals, and advocates. The missing piece, which really should be in place for next year, is acknowledgement

of nuclear’s role by all of the countries actually using it. Building on last year, when Rafael Mariano Grossi put the International Atomic Energy Agency on the front foot for the first time, the agency teamed up with industry groups and some of their members to create the Atoms for Climate stand. Hosting discussions with experts, ministers and head of organisations from the UN system, they showed a face that was worldly, diverse, innovative, professional and dedicated, but above all one that was present and engaging.

All this comes in addition to the volunteers from the Young Generation Network and self-funded advocates from around the world who have been the industry’s sole representation on a shoestring budget for years.

COP always has a lot of critics, but the meetings are important and necessary. You can’t have a global effort to reduce emissions without agreed goals and a process towards them. You can’t have a process without reporting and discussion. You can’t have a legitimate discussion without involving every stakeholder. So, when every nation, community, interest group, and industry in the world has to be present to have their say the result is inevitably a circus, but an unavoidable one. After all, COP stands for Conference of the Parties.

Representation at COP and elsewhere is vital to nuclear because it is such a small industry. With its innate resource efficiency and remote sites, few people without hands-on experience have any real knowledge of nuclear. And we all know the word nuclear comes with enough negative assumptions to fill any information gap left unattended.

Representation at COP and elsewhere is vital to nuclear because it is such a small industry. With its innate resource efficiency and remote sites, few people without hands-on experience have any real knowledge of nuclear.

Even in the energy industry the level of awareness about nuclear is surprisingly low and it seems that many people in the wider energy industry are no different from people in the street – they are curious about nuclear and ready to hear about its role. But these conversations do not happen unless nuclear turns up. Lacking continuous investment in representation, nuclear has been perpetually overshadowed and forgotten, but that vicious cycle has now been broken at the diplomatic level.

The issue lingers on at the national level. At a COP meeting you will see images and models of wind turbines and solar panels everywhere you go as every country in the world vies to show off how much it is doing for clean energy. But you will barely see nuclear, even on the stands of countries relying on it and making it the backbone of their future energy plans.

A full analysis would take too long, but this year Brazil and Ukraine both omitted nuclear completely from their stands. So did China, despite it being host to the largest nuclear programme the world has ever seen. Nonetheless, China did manage to squeeze every other clean energy source onto a small diorama. South Korea considered nuclear too sensitive to mention, even though it is keen to export new reactors. France, the US, Canada and the UK all had some mention and at least one event. Host country Egypt had some events. Last year the UAE’s Barakah plant, which is decarbonizing 25% of its electricity, was given just one short sentence at the back of the stand; this year it got a picture as well.

Why does this happen? When this issue occurs it is usually because a country’s COP presence is managed by the environment ministry and not coordinated well enough with the energy ministry.

Japan epitomises the issue. Its only mention of nuclear energy came in the context of cleaning up the 2011 accident at Fukushima Daiichi, even though Prime Minister Fumio Kishida is urging the restart of reactors as quickly as possible to reduce costly LNG imports and get its emissions back down to where they were before the accident. Putting premature shutdowns in context, the Breakthrough Institute recently showed the ongoing closure of Japan’s reactors resulted in emissions equivalent to the total from at least 22 African countries. In reality, getting those reactors safely restarted is surely Japan’s biggest climate change project.

Japan’s case may be understandable, but the phenomenon can even be deliberate. Sometimes one ministry may be anti-nuclear and deliberately thwarting the efforts of another. Just look at Belgium and Germany for examples of how silly the political situation can be within a supposedly single government. In both of these countries Greens in a governing coalition insisted on controlling energy and environmental policy. They then pursue an anti-nuclear agenda while the majority of lawmakers accept this just as the way things are – the price of doing politics. But when push comes to shove Greens have been overruled in the national interest with premiers enjoying the support of the majority of lawmakers. Why is one marginal group allowed to control the issue when the political scene is predominantly pragmatic about nuclear? The time for that is over; the issue is too big now. As I noted above, the whole point of COP is for everyone and everything to be present for discussion.

Now is the time for evolution. Nuclear has earned itself a seat at the table and it has high-level representation as well as scientific results that vouch for its sustainability. There is no longer any serious pushback against mentioning nuclear energy. The missing piece of the puzzle is for countries that use nuclear power to recognise this explicitly in their national presences and statements.

Now is the time for evolution. Nuclear has earned itself a seat at the table and it has high-level representation as well as scientific results that vouch for its sustainability. There is no longer any serious pushback against mentioning nuclear energy. The missing piece of the puzzle is for countries that use nuclear power to recognise this explicitly in their national presences and statements.

I’m not arguing to put nuclear in a position that dominates the conversation, but simply to be depicted according to its true role. While nuclear may be only 5% of the global energy market, it is 27% of the clean portion of the world’s energy generation portfolio. Even a small fraction of the airtime given to renewables would still be many times more than nuclear is receiving currently. The normalising effect of nuclear simply being visible should not be underestimated.

The next COP presents the perfect opportunity. The host country, the UAE, is said to be planning to place its Barakah project front and centre and promotional graphics already show Barakah’s APR1400 domes sprouting up as part of a dream team with wind and solar.

As COP27 is wrapped up and countries sow the first seeds of planning for COP28, energy ministries in pro-nuclear countries need to reach out to colleagues in environmental ministries and make sure it really is a Conference of all the Parties.