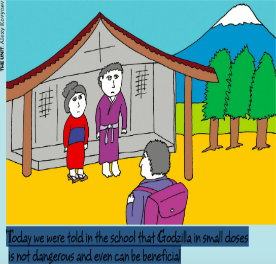 UK-based consumer soap brand Lush always carries one product line from which all proceeds after tax go to a selected charity. Jeremy Gordon looks at how the brand has been supporting projects in Fukushima as well as anti-nuclear campaigns in the UK.

I ENJOY MEETING RANDOM PEOPLE because they usually end up teaching me something about life.

A couple of years ago I met a someone at a house party in a rural part of the country, and in one of those getting-to-know-you conversations I learned he was a staunch vegan and had once been an animal rights campaigner. I am one of those people who could reduce or even eliminate meat from my diet, but would have trouble going without eggs or cheese. I was glad to talk about all that and establish some common values because I knew what was coming: he asked me about my work.

Based on experience, I expected my new friend would be no fan of nuclear power, and I was right about that. But I wasn’t ready for the anecdote that came next: a previous job he had held concerned marketing for Lush, the UK- based consumer soap brand, applying his NGO experience to run very modern marketing campaigns. Lush always carries one product line from which all proceeds after tax go to a selected charity. While ostensibly helping to do some good in the world, the product’s real purpose is to build brand image and keep people coming through the doors and buying more stuff.

My new friend told me about a business trip he had taken to Japan some years ago related to those kinds of product. What Japan needed, he told local managers, was an anti-nuclear campaign. Everyone knows Japan has never been very warm to nuclear, given its tragic history with the atomic bombing at the end of World War II as well as the incident when fishermen got radiation poisoning following a US weapons test. In that context, there is no doubt that hand cream supporting a ‘no nuclear’ cause would fly off the shelves.

However, the local manager pushed back. He knew that despite a scary image, nuclear was statistically the safest form of energy — a bit like flying. He also knew it was the bedrock of Japanese energy independence and had made an important contribution to the huge growth of wealth in Japan from the 1970s onwards. On balance nuclear had been a good thing for Japan and he would prefer they pick a genuine environmental issue because he didn’t want to go along with something misleading just to sell soap.

There was just enough time for my friend to insist that none of that mattered before the meeting was interrupted by the tremors from the 9.0 magnitude Great East Japan Earthquake of 11 March 2011.

The conversation and the meeting never reached a conclusion, and my friend left the firm before anything progressed. However, we can expect that local manager had no credibility to push back any more after the subsequent week-long triple meltdown of the Fukushima accident.

This filled in some background for me to a 2013 experience when I found myself tut-tutting to hapless shop assistants in my local Lush and explaining that its campaign to take Fukushima children out of the area so they could play safely was probably making things worse. Fears of radiation that manifested in an atmosphere of zero trust in the government have indeed prompted parents to restrict the freedom of children to play outside, but taking them away validates the fear and reinforces the idea that they are perpetual victims of the accident.

Some years had passed and I hoped all this was over, but I’m forced to tell these stories today because Lush are still pushing anti-nuclear campaigns on their charity pots.

Kathryn Yates, a PhD student at Imperial College London, raised the alarm on social media that currently in stores you can support No2NuclearPower with certain purchases. Her post raised hundreds of messages from nuclear energy professionals appealing to the brand to reconsider the damage it was doing. But Lush did not interact at all.

A look around their website reveals Lush has recently donated small amounts of cash to British groups including BeyondNuclear, Highlands Against Nuclear Transport, Radiation-Free Lakeland and the Close Capenhurst Campaign, as well as several anti-fracking campaigns and one against coal.

Regarding Fukushima itself, Lush seems to have become a little more advanced and in Japan it now sells a special range of products made using rapeseed oil from plants grown as part of a process that decontaminates farmland. Good stuff — farmers in Fukushima need support and I’m glad Lush recognises that caesium-137 doesn’t make it from the soil to the end product. However, a portion of the money still goes to taking kids out of the prefecture to experience supposedly radiation-free environments. The rest goes to grass-roots programmes that deliver play opportunities to kids in Fukushima by way of playbuses and the like. I’m glad they are helping Fukushima kids have a good time, but what the children really need is
the knowledge and confidence that the small amounts of radiation around them are far, far, far below any levels that could possibly hurt them. Who is going to provide that?

Education about nuclear energy and radiation is often called for by this industry, but it can only ever take a certain role in improving public opinion. The fact is that you cannot educate someone without their cooperation — there has to be a student-teacher relationship, no matter how informal. Appointing oneself in the role of teacher without the student’s consent will alienate them, cause them to suspect your motives and make them walk away and become even more sure of their previous ideas. This is especially true in the case of nuclear energy, where the reality is so different from most people’s starting assumptions. This is why patriarchal dispensation of numbers, factsheets and graphs which ‘prove’ nuclear energy is the best has never worked and will never work to shift public opinion at scale.

There is only one real opportunity to educate people about nuclear energy and radiation and that is the education system itself. Sadly, the treatment of radiation in Japanese schools has been woeful for a long time, despite the country’s history with radiation and the knowledge of its decisionmakers that nuclear energy was the backbone of the economy.

For 30 years — up to 2008 — radiation was not included at all in curriculum guidelines for Japanese children up to year 12. Even after that it took the Ministry of Education, Culture, Sports, Science and Technology some years to complete texts for tuition. They arrived in October 2011 – too late to have been useful during the Fukushima accident. Worse, because they had been drafted before the accident, they lacked credibility and raised accusations of a being part of a cover-up. It took until December 2013 to update them and there are still complaints they are too technical and difficult to understand.

One 2016 study conducted for the ministry found that dentistry students at university had difficulty understanding the terms and concluded that middle and high school children had little chance at all. It is any wonder the Japanese created Godzilla as a way of processing the dread they feel towards nuclear destruction and radiation, and it doesn’t apparently cross their minds to create a ‘science bus’ to support schools and enlighten curious kids about some of the interesting unseen energies in their environment.

The upshot is that most of the children in the school system during the Fukushima accident had received little or no formal education on radiation, and their parents knew even less. The same applied to most of the people making decisions around Japan in reaction to the accident.

Public communication efforts by industry and advocates can never make up for a chasm of ignorance like that. The onus has to be on the leaders of a technological society to prepare the population at least a little bit for the issues they face in life. Even the simplest demonstrations of radioactivity at school level would leave students with the knowledge that low levels of radiation can be handled very safely by a teacher with no protective gear whatsoever.

The frightened parents of Fukushima have correctly realised that lifestyle impacts due to fear of radiation have been its worst effects, by way of the faulty assumption that radiation is so mysterious that it may not even be possible to understand and therefore has to be avoided completely. Their position is emotional but not completely irrational, based on their information and experience.

It’s hard to be as generous to Lush. It has the luxury of time and distance to calmly consider the causes it supports, yet doesn’t listen to warnings and, knowingly or not, capitalises on fear.

Cartoon by Alexey Koveynev: “Today we were told in the school that Godzilla in small doses is not dangerous and even can be beneficial”