Japan – is there a future in nuclear? 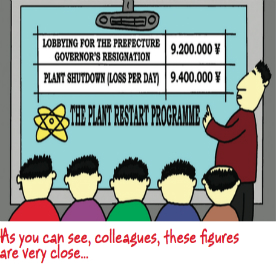 It is now more than seven years since the Fukushima accident in March 2011 but the future of Japan in nuclear power remains in some doubt, Steve Kidd explains.

Japan has achieved some acceleration of its reactor restart programme this year (eight of the operable units have now returned to service), but the cleanup operation at Fukushima continues to prove demanding, expensive and bad for public opinion of nuclear.

Nuclear power has been a cornerstone of Japanese energy policy since the mid-1970s. Before Fukushima it accounted for 30% of electricity production, with plans for increases to 50% and beyond, despite being the only country to have suffered the devastating effects of nuclear weapons in wartime. The key to this is the fact that Japan lacks significant domestic energy resources and has to import 80% of its requirements. It has seen nuclear as a counterweight and this remains the key argument in the Japanese government reaffirming its support for nuclear, although the environmental case for moving away from fossil fuels is today also important.

But even before the Fukushima accident there were acute problems with the nuclear programme in Japan that had tarnished its image and supported opponents. New reactors had been delayed or cancelled, because forecasts of electricity demand growth had been regularly reduced as the national economy slowed. More importantly, public support for nuclear had been seriously eroded due to a series of accidents and scandals. The accidents included a sodium leak at the Monju fast breeder reactor (FBR), a fire at a waste bituminisation facility at a reprocessing plant, and a criticality accident at a small fuel fabrication plant (which claimed two lives). Scandals included the falsification of quality control data on a shipment from Europe of MOX fuel and the poor documentation of equipment inspections at some reactors.

The Japanese government recently affirmed in its draft basic energy plan that it wants nuclear to provide 20-22% of electricity output by 2030 and onwards. This should gain Cabinet approval this summer but it requires about 30 units to be restarted and surely new units as time passes. The goal is achievable, according to the ministry, if existing reactors are allowed to operate for 60 years – well beyond the 40-year lifespan in place under stringent regulations implemented after Fukushima. The draft proposal also states that the government will raise the ratio of renewable energy sources, such as solar and wind power, to 22-24% of overall electricity output in fiscal 2030 (no specific share of renewable energy was set out in the previous plan).

Sceptics say the 20-22% nuclear target is unrealistic, given the long delays to restarts, and that reaffirming a high target for nuclear could trigger a backlash, as opinion surveys consistently show that a majority of the public remain opposed to resuming nuclear power in the aftermath of Fukushima. Japan is a rare case of a government trying to lead public opinion in favour of more nuclear and it is easy to see why, when one considers the balance of payments, energy security, power prices and the environmental impact of continuing to burn so much fossil fuel (including a lot of dirty coal).

With the soaring costs of imported fossil fuels, particularly liquefied natural gas (LNG), the current account of the balance of payments has experienced deficits, unusual in a country which is an export tiger. Increased dependence on imports also means less security of supply. The latter should not be underestimated in a culturally homogeneous island nation and is a prime reason why Japan went nuclear. Replacing low marginal cost nuclear power and with expensive gas-fired power has also had a serious impact on electricity prices. In a country where inflation was until essentially unknown, industrial and residential customers have faced increases of 20% and beyond. The Japanese business lobby has pushed hard for reactor restarts.

Targets to cut carbon emissions have been altered to reflect the nuclear shutdowns, but the expensive renewable energy plans cannot plug the gap. Renewable energy potential in Japan is not good and a highly urbanised population with significant industrial power demand means that the concept of a reliable baseload power supply (elsewhere subject to some criticism) is not dead. Japan risks embarrassment in international climate change negotiations unless it restarts more reactors: it is currently the world’s fifth-biggest emitter of greenhouse gases. Japan’s coal imports rose to a record in 2017 and LNG purchases climbed sharply. Fossil fuels accounted for 83% of Japan’s electricity, renewables 15% and nuclear only 2%.

Meanwhile, electricity deregulation in Japan means bigger customers are switching between the regional Japanese power companies. Legal separation between generation, transmission and distribution is set for April 2020. Arguably the most sensible policy is to combine the nuclear units into one specialist company (as in France and Russia) but this is unlikely, given the vested interests in the fragmented ownership of the regional power companies.

The 54 units operating before Fukushima have been reduced to 39 with the loss of six units at Fukushima Daiichi and nine other older units that have commenced decommissioning. Of the 39, there are some that are very unlikely to restart owing to either serious seismic issues or adverse local public opinion (for example, the four units at Fukushima Daini). The Nuclear Regulatory Agency (NRA) has restart applications for 26 units and all will need to be successful if the 20-22% nuclear share is to be achieved. After technical approval, reactors have to get the approval of the local prefectural authorities to resume operation and there may be legal challenges by concerned citizens groups. It appears, however, that operating beyond 40 years is now possible with NRA approval.

Probably the key plant in the restart process is Tepco’s Kashiwazaki-Kariwa, where there are seven units, including two relatively modern large advanced boiling water reactors (ABWRs). The sudden resignation of anti-nuclear Niigata prefecture Governor Ryuichi Yoneyama in April has offered a glimmer of hope. The NRA ruled last December that the ABWRs met its post-Fukushima safety standards, but Yoneyama withheld prefectural approval pending the results of a lengthy public civic review of the causes of the Fukushima Daiichi accident, its impact on health and the economy and Tepco’s role in it.

Most analysts believe that it will be a good result if 20 reactors eventually return to service, but it makes a 20-22% nuclear share impossible without substantial new build. Only Ohma 1 and Shimane 3 are currently under construction and should come into service in the early 2020s. (Ohma 1 will be the first reactor worldwide to have a core that is 100% fuelled by MOX fuel incorporating recycled plutonium.) Another dozen have been at the planning stage at one time or another. Further progress on these is surely dependent on more successful reactor restarts and better management of public opinion.

Japan continues to have a major interest in exporting nuclear reactors, with three companies (Toshiba, Hitachi and MHI) in reactor design and engineering. But the international market for reactors is limited and has fierce competition from Russia, China and South Korea. Attempts to get Japanese companies to act collaboratively in the Vietnamese market floundered when that government decided to cancel its nuclear programme in November 2016.

Active Japanese export prospects are very limited. Toshiba sold the Westinghouse business to a US private equity firm in February 2018, unloading it for $1 billion less than it paid ten years earlier. It has been engaged in selling its valuable memory chip business to make up the balance. The only significant export prospects still standing are in Turkey and the UK.

MHI’s involvement with Areva in contracting to build the Sinop nuclear plant in Turkey has floundered as the Japanese trader Itochu and the French utility Engie have both pulled out. Although Turkey has broken ground on its first nuclear project, a joint venture with Rosatom to build four 1200MW VVERs at Akkuyu, other plans appear on hold.

In the UK, Hitachi owns the Horizon Nuclear Power project at Wylfa in Wales and consisting of two 1350MW ABWRs. The firm’s CEO would like to see a consortium of UK firms and the government take half of the risk of financing the project and recent negotiations have taken place. Hitachi is also asking the UK government to provide guarantees for the 50% share its does take in the project, to lower the interest rate. Another key issue, as Hitachi sees it, is for the UK government to guarantee the power price – also a confidence builder for investors. Asking so much from the UK government is difficult as the government is politically weak, very much focused on the challenges of the exit from the European Union and under criticism for the generous terms it has granted the Hinkley Point C project. Hitachi has already spent $3 billion on developing the project, including licensing of the ABWR design in the UK, successfully completed in December 2017, but there is a real risk now of a collapse if terms cannot be agreed this year. On the other hand, if Horizon is successful with Wylfa, it hopes to build a second UK plant at Oldbury.

Elsewhere in the fuel cycle, Japan developed a complete domestic industry, but it has experienced multiple and costly problems. There is a small uranium refining and conversion plant. But most enrichment services are still imported and the small enrichment plant operated by Japan Nuclear Fuel Ltd (JNFL) has encountered technical issues. There are several fuel fabrication facilities, which can cover most of Japan’s needs, but the MOX fuel fabrication facility has also suffered severe delays. Japan has to import uranium and it has always been committed to a closed nuclear fuel cycle but it has relied to date on European reprocessing and fabrication facilities. At Rokkasho-mura, there is a major complex including the enrichment facility, low-level waste and high-level waste storage and a much-delayed 800t/yr reprocessing plant. The concept was to use the separated plutonium from reprocessing in fast breeder reactors making Japan virtually independent in nuclear fuel. But the Monju fast breeder reactor is now closed for good and there must be doubts about the economics in an era of abundant low-cost uranium.

The key to the future undoubtedly lies in the reactor restart programme. It has government support and a lot of experience in building and operating reactors, the fuel cycle and in research and development. But the Japanese public is now afraid of nuclear power, the government and regulators have lost their confidence, and the industry has been inept at countering this. Without restoring confidence there are limited prospects of a prosperous future.